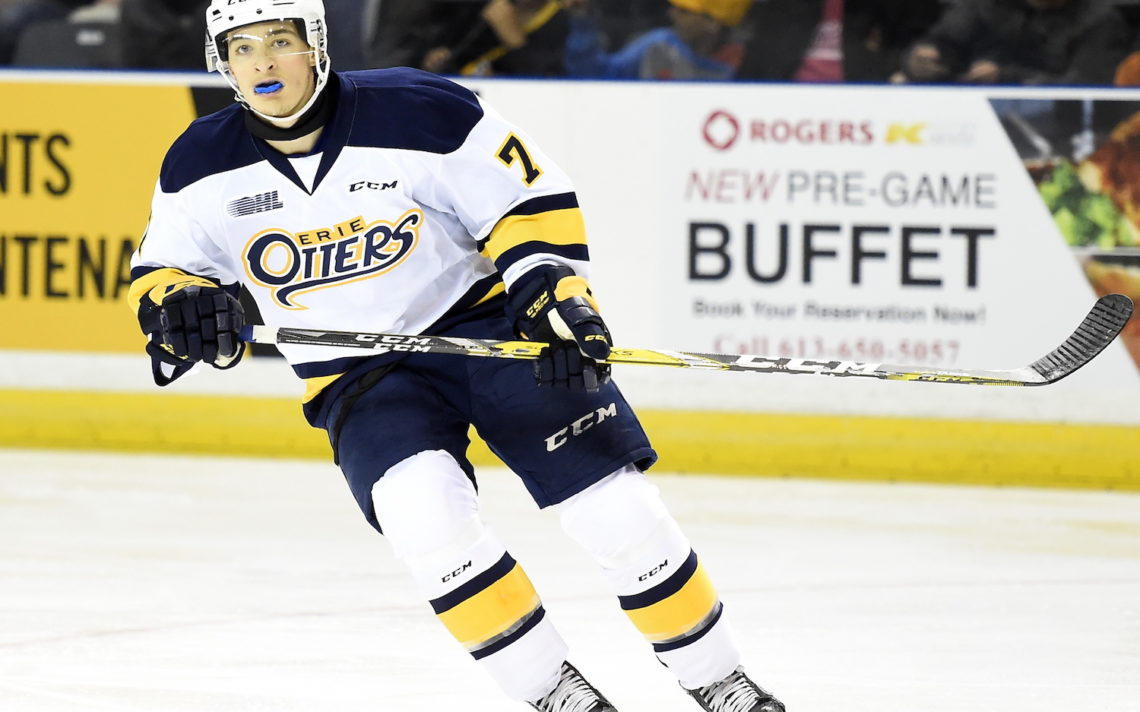 Thorold’s Christian Girhiny is in his third season with the Erie Otters. PHOTO BY: AARON BELL/OHL IMAGES

Christian Girhiny continues to be the thinking man’s hockey player.

Despite his relatively small stature, the 19-year-old Thorold native has survived — even thrived with the Erie Otters — thanks to his hockey intelligence.

“For whatever he lacks in size, he definitely makes up for and then some with his IQ,” Otters assistant coach and former St. Catharines Falcons coach Wes Wolfe said. “One of the things he does better than anymore is read the play before it’s going to happen. He puts himself in a position to be above the puck, gets his stick in the passing lanes, and just generally positions his body in a way he’s elusive.

“We call him Greasy Girhiny because of the way he slips his way through.”

Girhiny, who is listed at 5-foot-11 and 159 pounds, is in his third season with the Otters after spending his first year of junior eligibility at Ridley College.

He scored 12 goals and 25 points on a stacked Erie squad which made a memorable run at Memorial Cup last season and this year has moved up on the depth chart with the graduation of stars such as Dylan Strome and Alex DeBrincat.

Girhiny feels he is up for the challenge.

“We had such a good team last year,” said Girhiny, son of Falcons general manager Frank Girhiny. “I was on the ice or watching them and some of their habits and how they played that key role and now I’m trying to adapt it into my game in general.

“I have a good group of guys behind me that are going to work hard.”

Wolfe has no doubt Girhiny is up for the challenge.

“With all the players graduating from our team, we knew we had to rely on Christian a little more this year. He’s doing a tremendous job filling the void in terms of secondary offence playing a primary role on our penalty kill. He’s been an important player for us.”

Girhiny, who has six goals and 14 points so far, is well aware he is expected to provide more offence this season, but also knows where his bread is buttered.

“I want to adapt it (offence) into my game,” he said. “I’m not going to be that one-time sniper from the top of the circle guy. From the hash marks down is my area and that’s where I work and can be gritty and score my goals.”

“He’s one of those guys who was a producer when he played at Ridley College and in minor hockey so it wasn’t for a lack of offensive production, it was more opportunity the year before,” Wolfe said. “One of the things Christian does really well is spend a lot of time in the offensive zone and keep the puck off the other the other team’s best player’s stick. He’s generally hard to play against with how smart he is getting into areas and breaking up plays with his stick.”

The Otters, after making their run last season, have retooled this season and are in more of a rebuilding mode.

“What we did last year, I will remember it for the rest of my life,” Girhiny said. “We have a lot of young guys this year and I think they are starting to learn their way and what their game is going to be in the OHL.

“I thought we’ve been playing pretty well. Everyone is doing their job. We’re not getting the results we want or even what we got last year. We’re kind of in that rebuild stage but every night we want to win.”