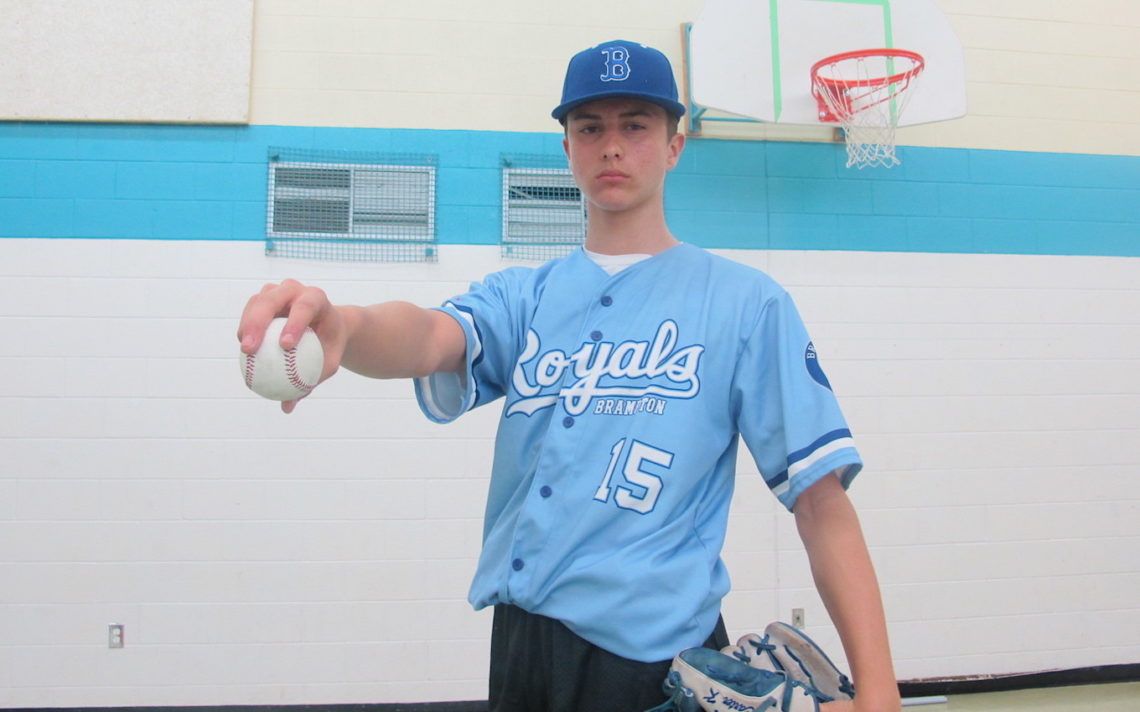 The 14-year-old, Grade 9 student at St. Francis has carved out some impressive achievements on the diamond and recently received news that may have topped them all.

Krawchuk has been selected to play for Team Canada at the 16U Sunbelt Classic in Oklahoma at the end of May.

“Representing the country is something you always want to do as a kid so it’s going to be pretty amazing,” Krawchuk said.

His parents, Shannon and Sean, had prepared him to be overlooked simply because he is a year younger than most of the players who were at the tryouts.

“I went to the first tryout in Brampton we had a lot of older kids,” he said.

The only younger kids were from the 15 and under Brampton Royals team where Krawchuk plays.

“When I came out to the first tryout in Brampton, everyone was huge. There were a lot of big kids, but it’s not about size, it’s about talent,” he said.

Krawchuk tried out as a pitcher and hit 82 miles-per-hour on the radar gun.

He was so impressive he was asked back for a second tryout, this one in Windsor.

“We waited for two hours. I pitched for 15 minutes and we left,” Krawchuk recalled.  “You really have to gas it up. You have to throw it as hard as you can right away which is difficult at times but I had two hours (before) to throw and stretch.”

The Krawchuks then played the waiting game for three weeks until mom saw the e-mail confirming Carter had made the team.

His reaction was straight and to the point.

“I just made Team Canada!” he smiled, when asked what went through his mind.

Krawchuk is looking forward to the competition which pits Team Canada against some of the top players from various states.

“That calibre is probably going to be a lot better because it’s not just Ontario,” he said. “It the best of the best so I just have to show well and do the best I can and get some ground balls and strikeouts.

“It prepares you for a lot more.”

Krawchuk, who has represented Ontario at Major League Baseball’s Pitch, Hit and Run competition, is putting in extra hours off the field to get himself ready.

In addition to working with pitching coach and former pro Jason Pilkington, he has also done work with the pitching coach of the Ontario Blue Jays, and works out several times a week with his Brampton team. Those practices are generally three hours in length. Toss in games and tournaments and that’s a ton of baseball.

“I’m used to it,” he said, noting he normally does any homework right after school and before supper. Then it’s in the car and off to a diamond somewhere.

“It’s hard. There are nights when we are getting home at 11:30, but it’s forcing him to be organized,” Shannon said.

As well, Carter is attempting to bulk up — he’s about six feet and 150 pounds.

“At this age, you have to pack on pounds and eat a lot and work out because you have to get stronger and get more velocity,” he said.

Part of that routine is a healthy smoothie he dislikes, but drinks every morning.

Krawchuk’s long-range plans are to pursue a scholarship or “play for the Blue Jays.”

Regardless, he is well aware of how special his talent is and the opportunities that could await him.