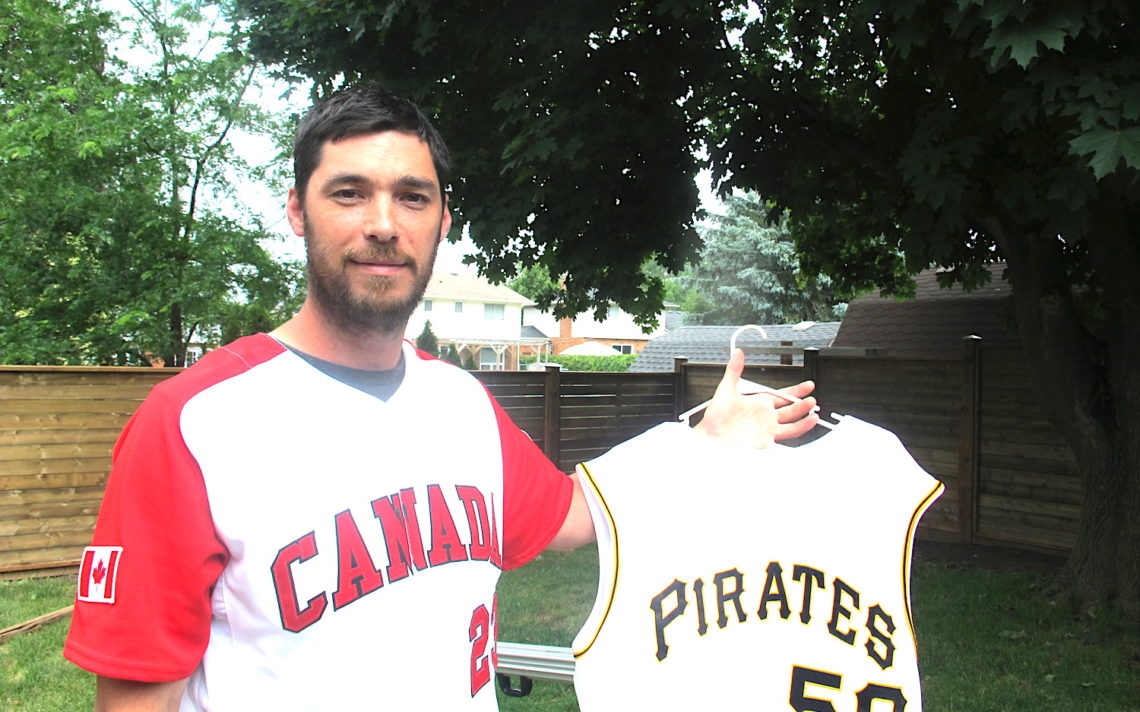 Dave Davidson wouldn’t be human if he didn’t look back once in a while and wonder about the road not taken.

The 34-year-old former Thorold resident is living a comfortable life in Pelham with his wife, Brandi, and a son on the way later this year. He works for the family renovation and design company and still gets his fill of competitive baseball for the Niagara Metros senior team, where he is one of the club’s top hitters.

But things could have turned out much differently for Davidson, who was selected in the 10th round of the 2002 Major League draft by the Pittsburgh Pirates and made his major league debut five years later for the Bucs in St. Louis.

“(Metros manager) Jono (Marcheterre) and I do it all the time,” Davidson said. “The what if game. ‘What if I went to school? Would I have been a first-rounder? Would I be sitting here a millionaire saying is was easy? Maybe I would have got hurt.’

“I have no idea what would have happened.”

What Davidson does know is his career was derailed by problems he encountered in both the Pirates and Miami Marlins organizations, which he said led to arm problems.

Davidson pitched two games for the Pirates in 2007 after being called up in September. He remembers after his big league debut being taken aside by the Pirates pitching coach and told he should try throwing submarine. At the time, Davidson, a left-handed pitcher, threw from a three-quarter arm slot and featured a 92-m.p.h. fastball and a big-breaking curve.

“I was 23 and called up and didn’t pitch for 10 days, and then I’m throwing seven or eight bullpens full blast and my arm was never the same,” he recalled.

He was also subject to the Pirates philosophy at the time where they tried to have all their pitchers use the same mechanics.

He also ran into issues with the director of player development. Things got so bad he was even cornered by a member of the front office in the player cafeteria and confronted in front of the team.

“He had my back against the wall and a finger in my chest,” Davidson said.

Davidson remained in the Pittsburgh organization — he had a solid season at the AA level in 2008 with a 5-3 record and 3.44 earned run average — but was released and selected off waivers by the Marlins in April of 2009.

After a handful of games at the AAA level, Davidson got another call to the big leagues and was thrown into a blowout game against the Tampa Rays. He allowed four hits, five runs and struck out the side in one inning while throwing an astounding 54 pitches. He also managed a base hit in his only big league appearance.

His locker was cleared out and he was on his way out of the organization before the game was even over. He was even told he couldn’t keep his jersey, as is generally customary.

“I felt when it happened I was really finding myself again. My velocity was up and I finally got my curveball again. And then see ya. 54 pitches in an inning.”

The inning took its toll on Davidson’s arm. He was selected by the Baltimore Orioles on a waiver claim, but returned a few days later when the O’s discovered he was injured.

The Marlins released him later that year, referring him to a local doctor once and doing little else to help him.

“I told them I would pay my own way to their facility to work out,” he said. “They said it wasn’t their problem.”

Davidson returned home and hooked up with the Metros to contemplate his next move. He enjoyed playing for the Metros, but wanted to give pro ball one more chance and signed with the Edmonton Capitals of the North American League where he lasted one season.

“I would rather come here and have fun and have a life.”

Looking back, Davidson feels the sacrifice was worth it.

Like all minor leaguers, he struggled to make ends meet on a paltry $850 a month when he first signed and rode the buses all night in the hope of making it big.

“How are you supposed to live on that? You can’t.”

Still, there was part of the experience that was so alluring.

“It’s a weird feeling. You know you’re being underpaid for a standard job, but you have this sense of pride that overwhelms that. That is in you. They can’t take that away from you. It’s surreal.”

There were other perks.

“Getting away and playing for Team Canada, I was playing for fun for the first time in years and for something else other than yourself. It was huge.”

And, when all is said and done, he is in a very exclusive club. After all, he made it to The Show.

“People asked if I was pissed I’m not playing. I was, but now I’m happy,” he said. “I wished it went differently. I wish my arm didn’t go out the way it did.

“It was frustrating, but I can’t look back and say I got screwed. I made it and that was something I never actually thought was going to happen.

“I have no regrets.”