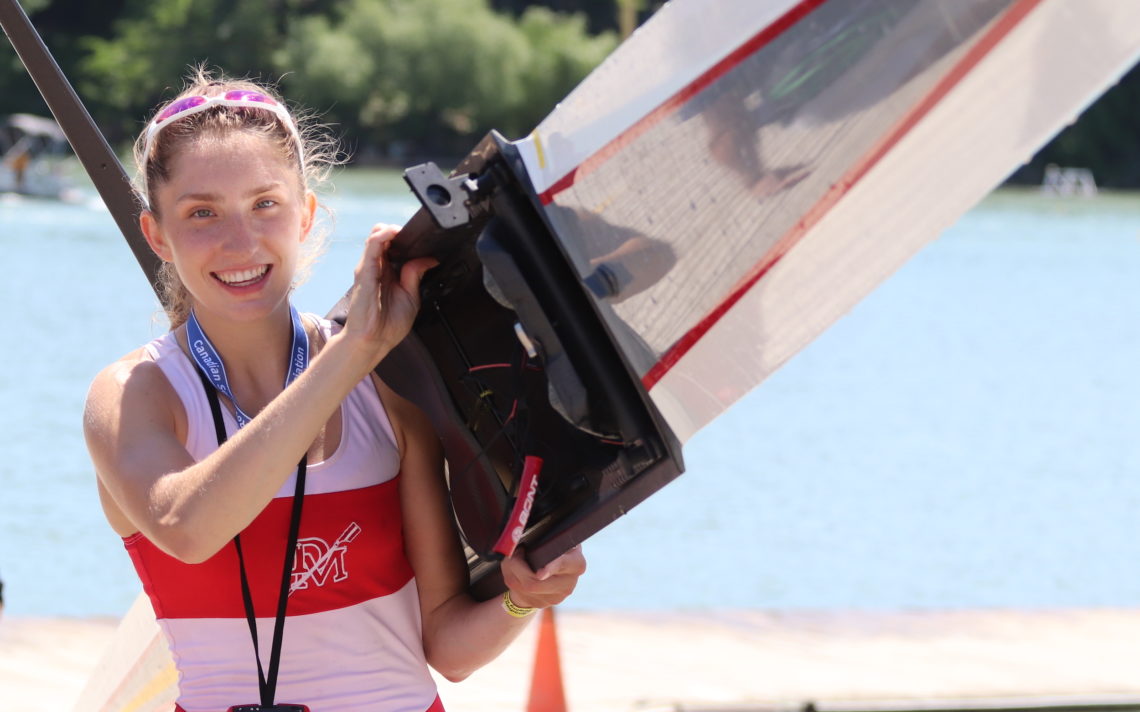 Niagara athletes ready to rock in Week 2 of Games

Cait Whittard is one of several Niagara athletes competing in Week 2 of the Niagara 2022 Canada Summer Games.

The second week of competition at the Niagara 2022 Canada Summer Games will see a high volume of Niagara athletes hoping to stand atop the podium.

Below are snapshots of each athlete, including information on where and when they will compete (exact times not always available):

Nikola Mitrovic, a 17-year-old from Niagara Falls, is an outside hitter with the Pakmen Volleyball Club and a student at A.N. Myer. He was named a 2022 provincial All Star, and was a member of the 2019-20 and 2020-21 Canadian Youth National Team. When the Games are over, Mitrovic will head to Queen’s to play scholarship volleyball and study economics.

Kennedy Millin graduated from Sir Winston Churchill in St. Catharines this year, on her way to playing for Queen’s University this fall. The 17-year-old setter who plays for Mountain Valley Club, earned a silver at the Nationals in Edmonton this year, and was named an all-star for her efforts. At the Ontario Volleyball Association championships, her team earned bronze.

Grace Tennant is a 23-year-old from Caistor Centre who competes in the shot put and discus throw. The South Lincoln graduate is in her fifth year at Kent State University, with several career highlights to her name, including competing in the Canada Summer Games in 2017, the World Juniors in 2018, and the NCAA D1 indoor nationals in 2021. Most recently, she placed third in the Canadian nationals, and third in the Mid-America Conference outdoor championships, both in 2022.

All track and field events take place at the Canada Games Park. The women’s shot put competition includes qualifiers Wednesday at 3 and 4:10 p.m., with the final on Friday at 10:15 a.m. The discus throw qualifiers are Friday at 4:45 and 6:15 p.m., while the final goes Saturday at 2:30 p.m.

Shannon Swinson, 22, from Beamsville, calls both the Niagara Olympics Club and the West Niagara Special Olympics Clubs her home clubs. The 2019 Ontario Federation of School Athletic Associations’ silver medalist in the 100-metre and 800-metre girls intellectually disabled division qualified for the Games by winning the 100 metres and 200 metres at the Ontario trials at York University. Not only did she cross the line first in the two events, but she recorded personal bests in both races.

Noah Dommasch, 19, is a St. Catharines native currently training with the Royal City Track Club in Guelph. While his events have included heptathlon and decathlon, he will be competing in high jump during the Games, following a first-place (and in-event record) finish at USPORTS earlier this year. The Sir Winston Churchill graduate, and current University of Guelph student, also placed second at the Canadian indoor nationals in 2019.

Men’s high jump includes qualifiers Wednesday at 3 and 4:30 p.m., with the final on Friday at 3 p.m.

Owen Konkle is a 22-year-old from Grimsby who will compete in the 100 metres and 200 metres. A member of Special Olympics Ontario, Konkle’s most recent accomplishment was placing third at the Canadian Track and Field Championships and winning a silver and a bronze at the World Para Athletics Grand Prix in Mexico. Prior to that, in the 50th anniversary of the Special Olympics, the Beamville and District Secondary School graduate earned gold in the 100 metres, 200 metes and 400 metres and also added bronze medals in the running long jump and 4X100-metre relay at the Special Olympics Ontario Invitational Youth Games in Toronto.

Matthew Martel, an 18-year-old from Pelham, is a Notre Dame graduate and member of Lookout Point Country Club competing with the golf team. Having impressive showings on the Niagara Junior tour, Martel also qualified for the 2021 Ontario Men’s Amateur championship. This fall, he plans to play golf and study integrated biomedical engineering and health science at McMaster University. This summer, he placed seventh at the Ontario junior boys championship.

Round 1 for golf takes place at Legends on the Niagara on Wednesday, while Round 2 is played at the same venue on Thursday. Round 3 for the males goes Friday, while the mixed team plays Round 3 Saturday.

Owen Bartel is an 18-year-old rower from St. Catharines coming fresh off a first-place finish in both the single sculls, and the double sculls, at this year’s Canadian Secondary School Rowing Association (CSSRA) regatta this past June. The member of the St. Catharines Rowing Club, and Eden High grad, also placed third at the National Rowing Championships in 2021. He placed 11th in the double at the 2022 under-19 world rowing championships.

Shane Keagan, from Pelham, is an 18-year-old rower with the Ridley College Rowing team. Keagan was also part of the Junior National Team in 2021 and 2022, and he set a new record in 2021 for the U17 men at the Canadian Indoor Rowing Championships. At the 2022 under-19 worlds, he was a member of the four that placed eighth overall.

Hailey Mercuri, from Vineland, is a 21-year-old sculler currently rowing with the University of Iowa. Prior to this Games, the Grimsby Secondary School graduate participated on the national team for the U19 World Championships, and again for the U23 Worlds. At U Iowa, she was a member of two victorious varsity eight boats during the 2021-22 season. At the recent under-23 worlds, she was a member of the eight that placed seventh.

Teagan Orth, 19, from St. Catharines, is a St. Francis graduate who currently rows at the University of Virginia. Named to the U19 Canadian national team in 2021, her quad was 10th at the World Junior Rowing Championships in Bulgaria. In 2020, she was second at the Ontario Ergometer championships and third at the Canadian Ergometer event in the Women’s Open U19.

Niko Schramm is a 20-year-old Niagara Falls native currently rowing with the University of British Columbia; he is affiliated with the St. Catharines Rowing Club as well. With the local club, he was part of the first-place senior men’s lightweight four earlier this month at the Royal Canadian Henley Regatta. In 2019, while still at Ridley College, he was also part of that school’s first-place U19 mens 8+ team at the Royal Canadian Henley Regatta. At UBC, he was named varsity men’s rowing’s rookie of the year in 2021, after his lightweight men’s double team placed third at the Canadian University Rowing Championships..

Kai Bartel, 19, studies at the University of Victoria, where he placed first at the 2021 CURC. In 2019, with the St. Catharines Rowing Club, the Niagara-on-the-Lake native and Eden graduate was part of the first-place U19 men’s eight at the Royal Canadian Henley Regatta. That same year, his youth coxed four team was second at the Head of the Charles.

Riley Pisek is a 20-year-old coxswain from the St. Catharines Rowing Club, who is also affiliated with Brock University. As cox for the lightweight men’s four, the Brock team placed second at the 2021 CURC, while both the lightweight four and lightweight 8 teams placed first at the Ontario University Athletics Championships that same year.

Earlier this summer, Schramm, Bartel and Pisek were part of a contingent of St. Catharines Rowing Club members who also competed in the Thames Cup at the Royal Henley Regatta in England.

Cait Whittard is a 17-year-old Denis Morris graduate from the St. Catharines Rowing Club. She has accepted a D1 scholarship to the University of Tennessee for this fall, and is coming into the Games with several recent first-place finishes to her name, including at the Canadian Scholastic Rowing Championships and Ontario Small Boat Trials this year; and as part of the U19 National Rowing Championships last year. At the recent under-19 worlds, she placed seventh in the double.

Nicholas Murray-Coplen is a Governor Simcoe graduate who rows for the University of Victoria. He coxed Victoria’s men’s eight to a CURC silver. He will be competing for B.C.

Malarie Jones is a 16-year-old E.L. Crossley student from Wainfleet who rows under the Notre Dame Rowing Club banner. Jones recently earned the top spot in the senior women’s category of the Ontario Ergometer Championships in 2022. Prior to that, her quad won first in Welland at the Head of the Welland, and her eight won first at the Head of the Trent, both in 2021. At the 2022 under-19 worlds, she placed 10th in the women’s four.

Madeson Scott is a Notre Dame student who also competes with the Notre Dame Rowing Club. The 17-year-old recently placed second at the Ontario Small Boat Trials, and first in the CSSRAs. In 2021, with the U19 team, she placed fourth in the National Rowing Championships. At the 2022 under-19 worlds, she placed 11th in the quad.

Stella Bittman, 16, rows with the Notre Dame Rowing Club. The Notre Dame student was most recently named to the U19 national women’s quad roster by Rowing Canada. She enters the Games after winning first in the women’s junior double at the Stotesbury Cup, as well as first in the senior women’s double at the CSSRA regatta.  Earlier in the year, at the Canadian Indoor Rowing Championships, Bittman was first in the U17 category. At the 2022 under-19 worlds, she placed 11th in the quad.

Lucas Maroney is a 16-year-old Notre Dame student from Welland who has been training with Ontario NextGen Performance. He placed first in the seniors competition at the Stotesbury Cup this year, as well as second in the CSSRA senior division and first in the junior competition. In 2021 he was named to the CanAmMex squad, and placed fourth with the U19 team at the National Rowing Championships. At the under-19 worlds, he finished 11th in the double.

Carolyn Mullin is a self-proclaimed 'recovering' journalist who still likes to tell stories on the Niagara community. The Brock University and Niagara College graduate spent the first part of her career in newspaper magazine reporting, editing and publishing, where she earned provincial and national awards for her work. Today, Carolyn works in the post-secondary sector, helping local companies find innovation solutions to grow their business as partners with Niagara College's Research & Innovation division. 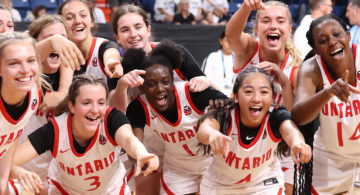