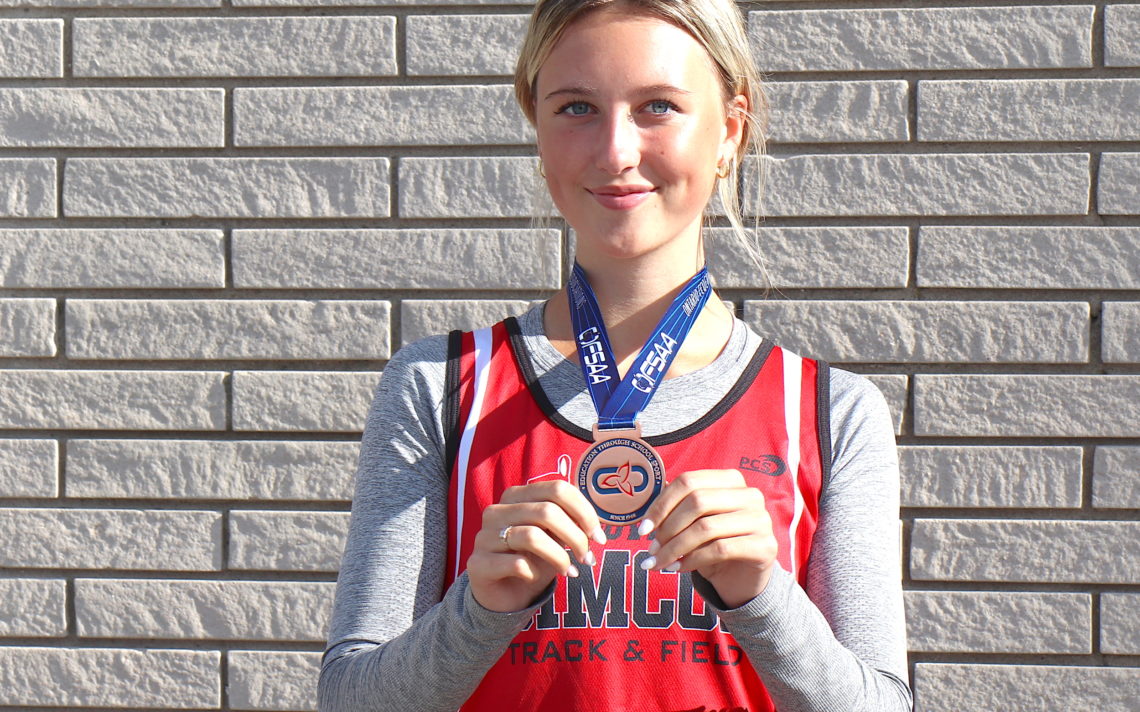 Big things were projected for Ava Neumann after she set a record with a leap of 1.64 metres in the bantam girls high jump at the District School Board of Niagara elementary track and field Championships in June 2019 while a Grade 7 student at Port Weller Public School.

“I don’t know how I jumped that,” the Grade 10 student at Governor Simcoe said. “I just think I was super-relaxed and that is the most important thing.”

The record was the start of a great summer for Neumann as she went on to win both the MTA and Athletics Ontario Championships later that summer and was named as an all-Ontarian in high jump.

Unfortunately for the 16-year-old St. Catharines resident, the jump still sits as her personal best.

“It bugs me a little bit,” the Thorold Elite Track Club member said with a smile.

She hasn’t let it deter her, however, and she recently returned from the Ontario Federation of School Athletic Associations track and field championships with a bronze medal in the junior girls high jump. Her leap of 1.50 metres was good enough to land her on the podium at her first crack at OFSAA.

“I was actually hoping for first but it wasn’t my best day,” she said.

That being said, it was still a great moment when an OFSAA bronze medal was placed around her neck.

“I was proud of it and super happy just to get the medal. Even making it to OFSAA was awesome,” she said.

There was no secret to her success.

“I stayed dedicated to it and I went to practice every day.”

She took a calm, cool and collected approach to OFSAA.

“I was doing warmups the whole time, I kept moving and I sat in the shade a lot.”

The OFSAA medal is the latest step in her track and field journey.

“I want to do it at university or college and that is my motivation.”

She knows it will be a process to get were she wants to go.

“I was out of Thorold Elite for a year because of COVID and I just got back into it this season. I have to continue with my training because practise makes perfect.”

Thorold Elite and Simcoe coach Steven Fife felt sorry for Neumann and other athletes in the same pandemic boat.

“It hit so many kids hard and unfortunately, due to COVID and some other circumstances, Ava actually didn’t jump for most of those two years so this really was a rebuilding season completely from the ground up again.”

This past season, she won junior girls high jump at the Zone 4 (1.40 metres) and at the Southern Ontario Secondary Schools Association championships (1.44 metres) and finished second at South Regionals (1.56 metres).

Fife is proud of Neumann’s performance this season.

“I was totally impressed with Ava. She did everything she was asked to do throughout the season and in each competition, she was poised and professional and supportive to her other competitors,” he said. “Even though she did jump higher at South Regionals, the jumps she took at OFSAA were her best jumps of the season and she didn’t have any faults until the final height of the competition.

“This is a story about refinding a part of herself and rediscovering her confidence in a difficult event. The amount of growth that I observed week after week is worth more than a medal.”