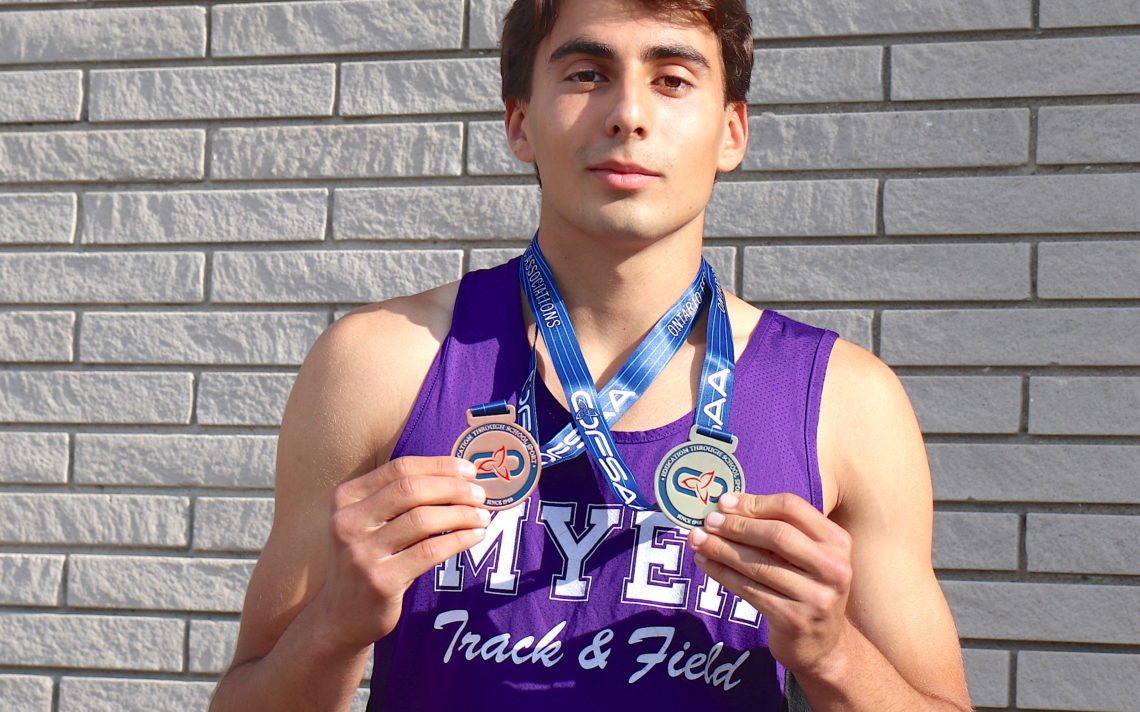 “Hopefully gold because I like that colour the best,” Ivanov said, prior to the South Regionals meet where he won gold in both events.

The Grade 12B student at A.N. Myer Secondary School in Niagara Falls got his wish at the recent OFSAA championships by capturing gold in the pole vault and bronze in the high jump.

Medalling at OFSAA had been his dream since Grade 9.

“I put in a lot of work and a lot of effort and things just weren’t adding up. I wasn’t sure if I was going to get the reward for all the effort I put in so I exhaled a little bit when that happened,” he said. “I definitely believed in myself and I just wanted to see where I could take it that day.”

He attributed his podium finishes to the consistency, quality coaching and the desire to be better.

“For me, it started with not even making regionals from mini schools meets and just wanting to be better and wanting to make it to that next meet. Then I set the bar a little higher each time.”

He has never forgotten the disappointment he felt competing in track and field in Grade 7 and 8 at St. Davids Public School.

“I wasn’t even the best jumper at the school and we only had 30 kids in my class. Watching them do better than me was really sad at the moment because they could do something I couldn’t and I was jealous of them.”

Most people quickly let go of their elementary school memories but not Ivanov.

“That was the first time where I really wanted to achieve something and I decided that it was going to be my focus for the next few years,” he said. “I hadn’t achieved anything big so I decided to put in the work and effort and just see how far I could take it.”

Ivanov’s OFSAA adventure started on Day 2 of the meet when he competed in high jump.

“There was a decent amount of competition and a lot of tall guys, not as skilled but they still had a good base,” the Thorold Elite Track Club member said. “I had to put up a good fight and I ended up tying for third.”

His jump of 1.90 metres tied his personal best in the event.

“I got to the podium so I can’t complain.”

Following some rest and recovery, Ivanov competed in the pole vault on the third and final day of the event. He had also qualified for long jump but decided not to compete in that event because it was scheduled at the same time as the pole vault.

“It was a really tough decision because I could have done well in both of them based on the results but I chose what I felt I could do better in. I was upset but I wanted my full focus to be on pole vault.”

It turned out to be the right choice. Like all his competitors, Ivanov jumped higher that he had done in qualifying events.

“The competition level was really high and it was a good sight to see,” he said.

Ivanov ended up jumping 3.80 metres, which shattered his old personal best by an impressive 0.4 metres.

“That day it was a combination of a few things. First, it was my coach (John Van Loon of the Hamilton Olympic Club) being there because he wasn’t there the whole season. He was there at the meet giving me feedback and good suggestions and we switched poles to a bigger and stronger one. That allowed me to get more air time and that seemed to help quite a bit.”

His gold medal jump was memorable.

“I knew right from the start that it was going to be a good jump. The feeling was amazing flying through the air and once I landed I was really excited,” he said. “The whole audience was cheering because there was just two of us left and it had been back and forth. It was a great moment.”

He has only been competing in the pole vault for about a year.

“I wanted to try something new and I had a few injuries to take care of. I wanted to still train but not hurt my injuries and that’s when I picked up pole vault.”

It was love at first leap.

“It’s fun, it’s an unique event and it is very technical and I love focusing on the details that add up to the bigger picture at the end.” 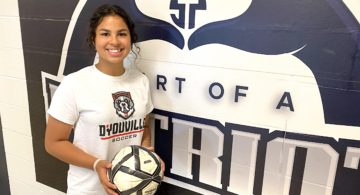