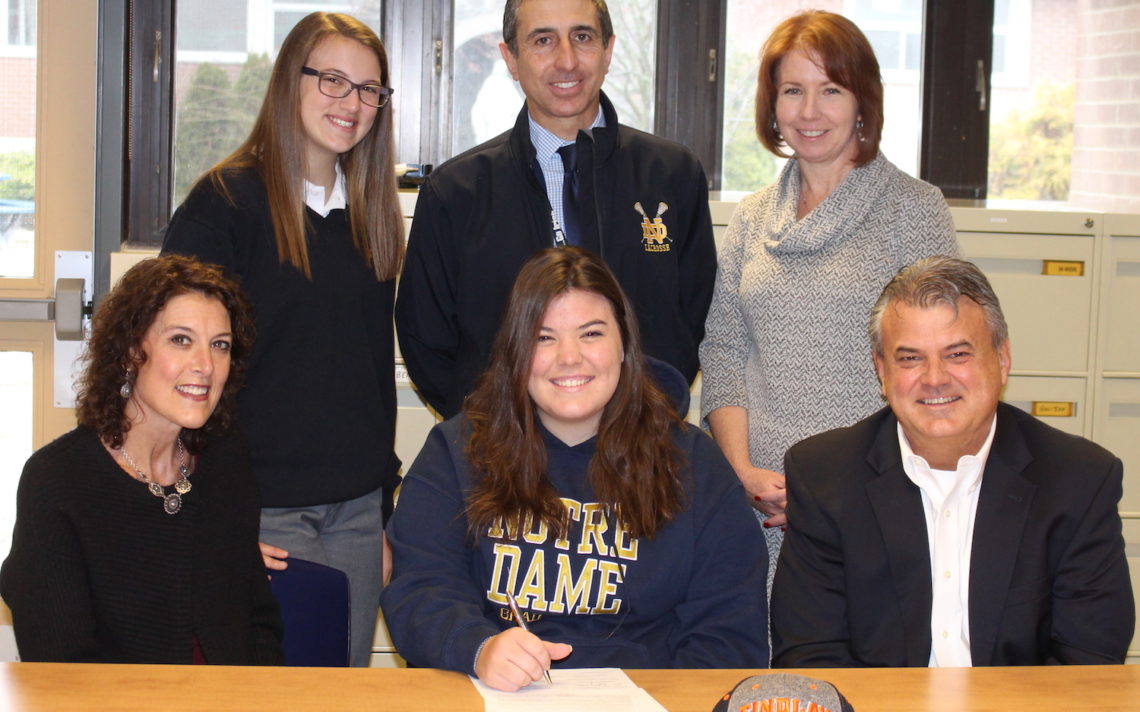 There is a slight difference of opinion as to how Sydney Patten became the starting goalie for the Notre Dame junior varsity girls field lacrosse team.

“I was voluntold to do it by him,” Patten said, referring to Irish head coach Agi Mete. “Before I even had the equipment on, he told me I would be playing in next week’s junior varsity game.”

Mete had a slightly different recollection of the event.

“In Grade 9, she came in as a freshman who had never played before and she volunteered to go into the net for the junior varsity team,” he said.

Wherever the truth lies, the 17-year-old Welland resident would spent two years as the starting goalie on the junior varsity team and is now in her second season as the starter on the senior squad. 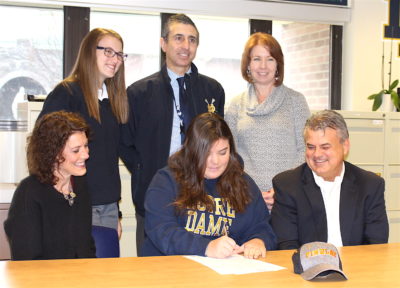 Patten, who signed a letter Monday accepting a scholarship to play NCAA Division 2 field lacrosse with the University of Findley Oilers, didn’t immediately embrace the position.

“It was a love/hate relationship,” the Grade 12 student said. “You had to get into the right mindset, but once I started to get better, I wanted to keep getting better.”

Part of the hate relationship with the sport comes from the fact that is often painful to play goal.

“I have a lot of bruises once lacrosse season starts and I think of them as battle wounds,” said Patten, who also competed in golf and volleyball for Notre Dame. “It’s proof that I saved the ball.”

Mete saw Patten develop as a goalie because she had two necessary characteristics.

“The No. 1 factor is no fear of the ball and No. 2 is in order to get better at the goalie position, you have to work on your game in the off-season,” he said.

Patten did just that, spending the past three summers tending goal for the Buffalo Stampede.

“She continued to develop the skills required to be a goalie and it changed from stopping balls to understanding the craft of being a goalie,” Mete said.

The biggest stride lacrosse goalies must take is to understand they are part of the offence and must initiate the transition game and fast breaks, which lead to odd-man rushes.

“That was the biggest thing I learned,” she said. “I needed to be more aggressive and move around.”

Her development helped her become the second Notre Dame goalie in the past three years to garner a scholarship in the States. Two years ago, Georgia Miller signed with Westchester.

Patten first realized she has a chance to play scholarship field lacrosse when she was playing for the Buffalo Stampede’s Grade 9 team. One weekend, the Grade 11 team’s goalie wasn’t available and she ended up tending goal for both squads. Afterwards, coaches approached her father and inquired about her lacrosse plans.

“That immediate interest showed me that there was potential,” she said.

Patten received interest from several other American schools, visited five or six universities, and had offers from St. Mary’s and Adrian College.

“All the boxes got checked off for me,” Patten said.

She chose Finley because: it was a small and compact campus; class sizes were small; there was a big emphasis on academics as well as the athletics; it was a faith-based school; and, she fit in well with her future teammates.

“All the girls were extremely welcoming and they acted like I was already part of the team,” she said.

“Her passion and enthusiasm for the game is contagious and inspires everyone around her,” Simko said. “She gives nothing short of her best every day and we are excited to see her grow and develop over the next four years.”

Mete has no doubt Patten will be a huge part of Findley’s team.

“She is a leader both on and off the field and her play last season was a huge reason why we had the successful season we did,” he said. “We are very excited that she will get to play the game she loves at the post-secondary level.”

Patten, who boasts an 85 per cent average, plans to study biology at Findley. Her eventual plan is to be a doctor, specifically an obstetrician-gynecologist.

“I want to continue to get better at my sport and I would love to become an All-American.