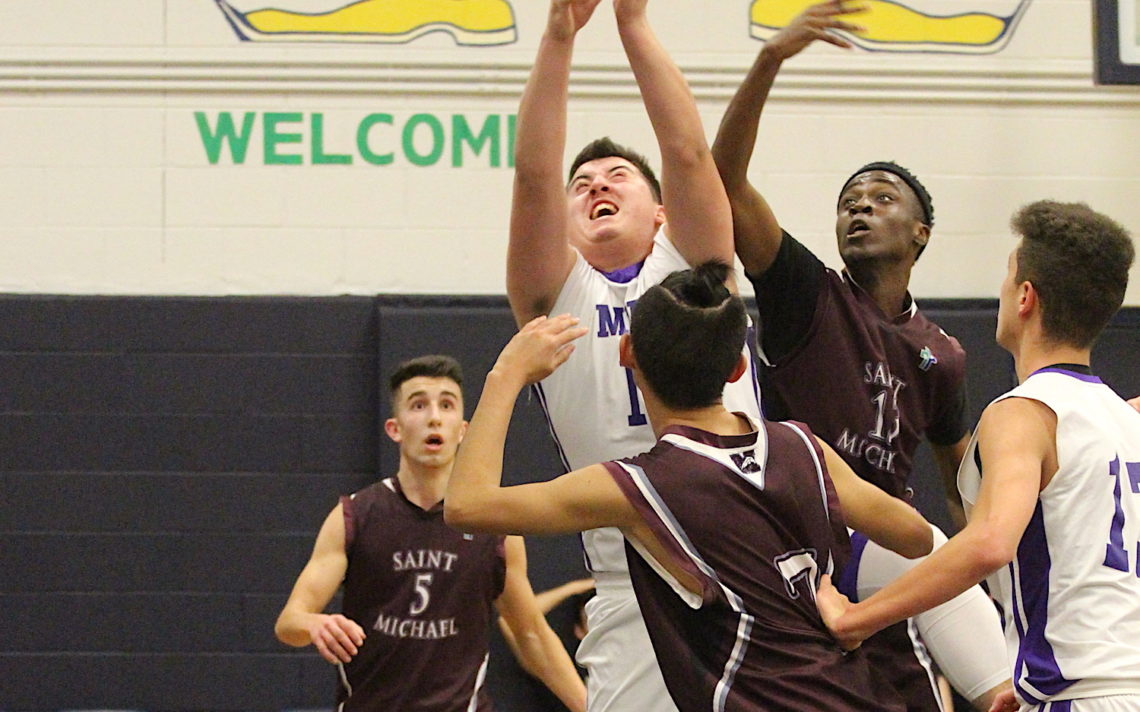 Myer’s man in the middle

At six feet tall and 240 pounds, A.N. Myer’s Ryan Shannon is not your typical post player.

“I am a little bit under-sized,” he said Wednesday, after scoring seven points to help the Marauders open the 63rd Annual Welland Tribune Basketball Tournament with a 51-42 victory over the Saint Michael Mustangs. “Playing the five, we push the pace on offence so I get most of my shots in transition.

“We rely in him to do a lot of the dirty work down low with hard screens and boxing out,” he said. “He’s the vocal leader of our team and he has accepted that role willingly.”

When asked about the last six-foot post player he knew, Shaw looked to an assistant coach on his bench.

“Not since Terry (Thomson),” Shaw said, with a laugh. “He (Shannon) doesn’t mind playing with a physical edge and he has learned to use his size and speed to his advantage when he’s going against bigger guys.”

The 17-year-old loves the paint, where he had six defensive rebounds in fourth quarter Wednesday.

“I like to be under the basket,” he said. “That is my most natural setting.”

Shannon also acts as a coach on the floor.

“I try to lead my team as best as I can out there,” he said. “The only returning players are myself and Thomas (Rigas-DiDomenico) and a lot of the young kids just need some guidance,” the Grade 12 student said. “They have a lot of talent as group. We just have to make sure we are all focused out there.”

Shannon role has changed a lot since his Grade 11 year.

“We had some talented Grade 12s last year and they moved on to university,” he said. “I learned a lot from them and I goy my minutes last year in spurts when I got called upon.”

Shannon, who played one year of house league basketball a few years and travel baseball since he was seven, was in more of a learning role for the Marauders last season.

“He stepped in nicely and he’s one of those guys that sees the game very well and understands what we are trying to do,” Shaw said. “This year, even more, he is understanding what he needs to give us and he has stepped up big.”

“We shook off some rust and we started playing some defence,” Shaw said. “Defence is the backbone of our team’s success and we played great team defence which generates offence for us.”

“Their intensity just changed,” Saint Michael coach Keith Bomberry said. “We lost a couple of guys to foul trouble and we had to make some adjustments and they overmatched us in that second quarter.

“I give them credit; they kept attacking and were finishing underneath.”

While Myer was making its easy shots, it was the exact opposite for Saint Michael.

“Coming off a long break and having two weeks of no basketball it really showed tonight,” Bomberry said. “If 50 per cent of those shots go in, it would be a totally different game.”

Bomberry loves the team he has this season.

“They are a great group of guys who work together,” he said. “They trust each other, we keep getting better and we have been in every game this year.”

The Governor Simcoe Redcoats advanced to the quarter-finals of the Trib tournament Monday with a 67-38 victory over the Holy Cross Raiders at Notre Dame. 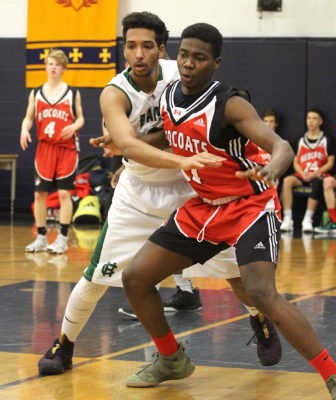 “Games like this I try to get as many guys in and try to prepare for next year as well,” Simcoe coach Shaun Feor said. “It’s an opportunity to get our youth in and they can experience competition at the senior level.”

It was the Redcoats first game back after the Christmas break.

“We had a couple of practices but there was some rust there,” Fior said. “I am hoping whoever we see in the next round has a little bit of rust too. Maybe we can get lucky with that.:

Players of the game were Bardi for Simcoe and Balsom for Holy Cross.