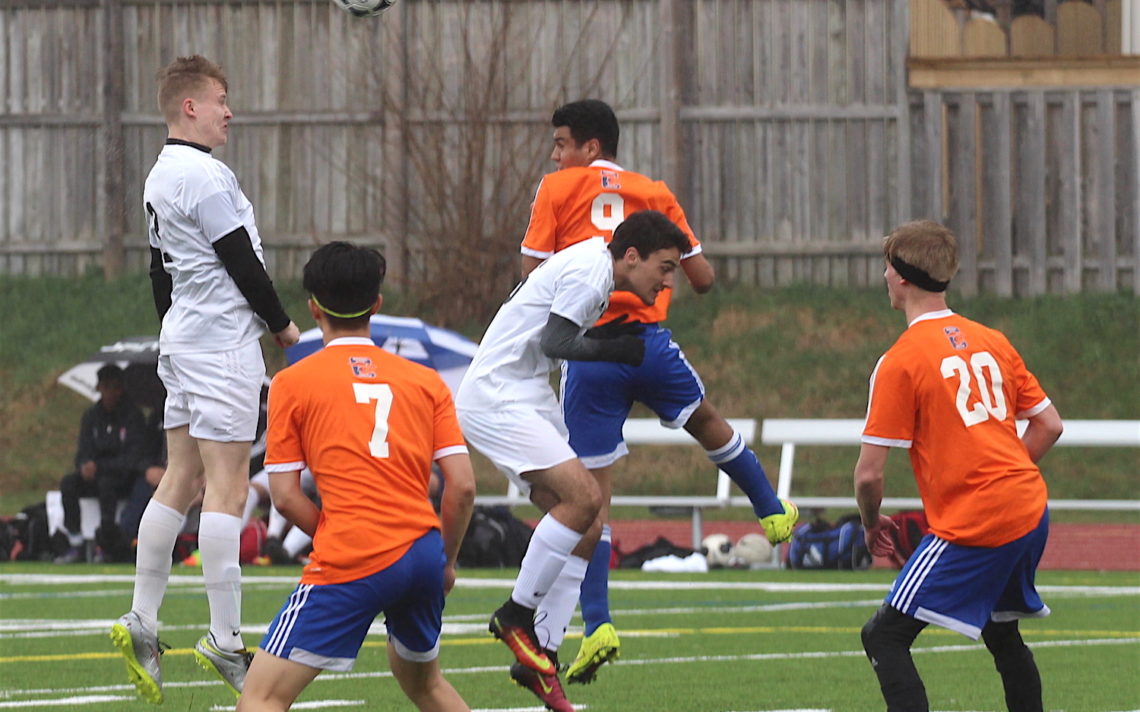 Centre back Josh Allegro is an important piece of the championship aspirations of the A.N. Myer senior boys soccer team.

“He’s our key leader, being our captain, and he directs all the traffic in the back,” Myer head coach Steve Apostolos said, after the visiting Marauders quadrupled Centennial 4-1 Wednesday in Niagara Region High School Athletic Association Zone 3 play. “He has an excellent soccer IQ, he communicates very well, he’s strong, he makes an excellent first pass and he is great at separating opponents from the ball.” 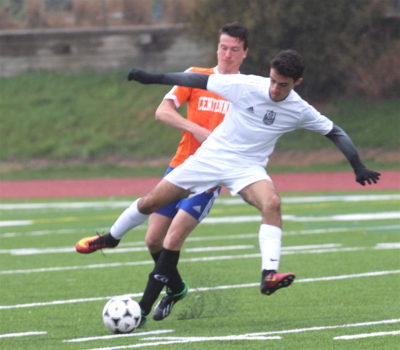 The third-year senior is the exact opposite of someone who is quiet and leads by example.

“I am really vocal on and off the field and getting the guys going if the energy is low,” the 18-year-old said. “I keep everything organized on the field from a defensive standpoint, making sure everyone’s marked and things are locked down at the back.”

He is also in charge away from games.

“At practices, I keep everyone focused and help Mr. A. Out.” 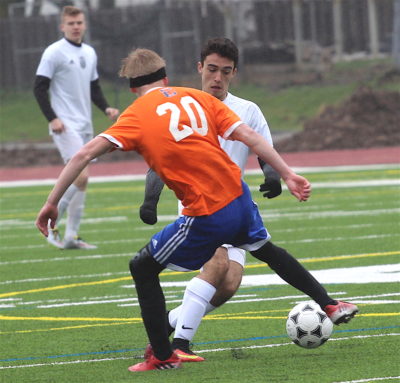 The six foot, 185-pounder is big on keeping his teammates accountable. Allegro,  who play travel soccer with the Niagara Falls Titans in an under-21 league, is more than comfortable in the role.

“I’ve been a captain on my travel team for a couple of years as well and it’s a role I have gotten used to,” he said. “And I was the captain last year as well.

“This year has been a little easier because last year there was a bit of a learning curve.”

Allegro would like to end his high school career with a bang. This fall, he will head to Wilfrid Laurier and plans to try his luck as a walk-on with the men’s soccer team. 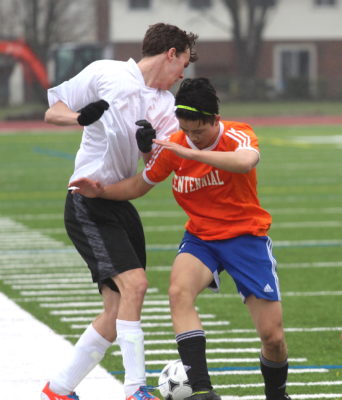 Centennial coach Nick Tomaino liked his team’s first half, but not so much the second.

“I think we outplayed them in the first half and moved the ball really well,” he said. “They got a couple of goals from the slippery surface from far out that rolled through.”

Things went from bad to worse in the second half.

“We lost two players — one kid had to go to work and he brought his brother with him — and our starting midfielder had a knee-on-knee collision so he was out,” Tomaino said. “We were down three starters and the kids were tired and fell apart.”

Playing with a varsity roster (juniors and seniors), Centennial has taken its lumps the past couple seasons, but Tomaino has been building a squad for this season.

“Hopefully this is the year. We have all the talent and the kids are determined and passionate,” he said. “Hopefully we can make it out of our zone this year.” 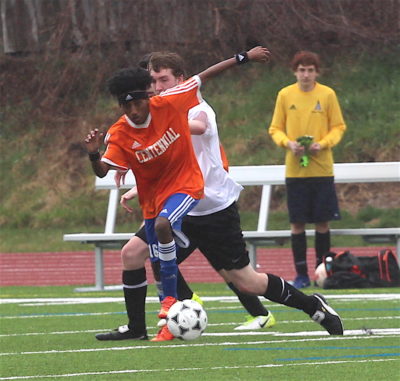 Myer improved to 2-0 on the young season, including a 1-0 victory over E.L. Crossley.

“It was a great game,” Apostolos said. “It was a little bit of wet conditions, but we played it safe and kept the ball on the ground.”

The team also communicated better in the second half in putting the game to bed.

“The game opened up for us more in the second half.”

Apostolos is hoping for big things from his squad this season.

“The expectation for this team is to go to OFSAA (Ontario Federation of School Athletic Associations) and make a push for a provincial championship,” he said. “We have a good team and the expectation is to always win a championship.”

Last season, the Marauders lost in a shootout to Waterdown in the Southern Ontario Secondary Schools Association championship game.

“We were at SOSSA the year before too and we were inches away from winning,” Allegro said.

He is also confident about his team’s chances.

“Our potential is sky high,” he said. “We have a great group of guys and everyone is really committed to the program and works hard.

“Everyone wants to win and we have a good thing going.”