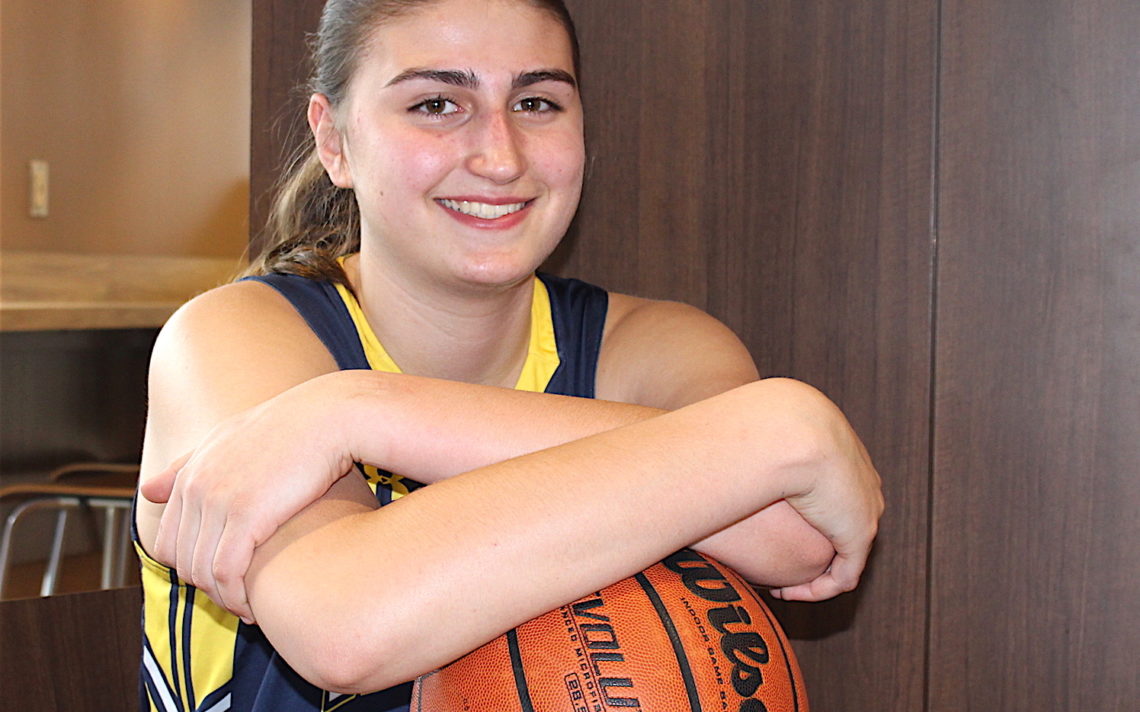 Lauren Audino has had meteoric rise through the basketball ranks.

Despite only starting the sport in Grade 7, the Grade 9 student at Notre Dame was recently selected to play for the Team Ontario under-15 squad. Last season, she made the provincial under-14 team.

At 6-foot-2, the Welland resident is proof of the old adage that you can’t teach height. But what you can teach is basketball skills and the 14-year-old has been an excellent student ever since Pelham coach Age Mete chose her for his under-13 team when she was in Grade 7. 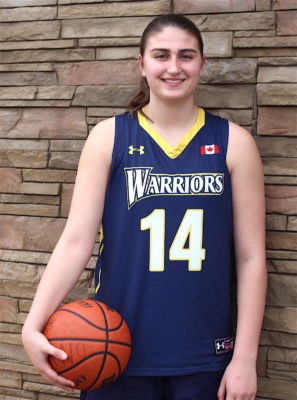 “Agi picked her just because of her height, she was coachable and she listened,” Lauren’s mother Terry said. “She sat on the bench until January, then we got her into Mihai (Raducanu of No Limit Performance) and she got herself better.”

Lauren has no illusions what kind of player she was at the beginning.

“I couldn’t dribble or do anything but I thought I would try it,” she said. “I started playing, developed pretty quickly and my friends helped me.”

No one helped more at the start than Raducanu.

“He taught me a lot of skills, especially rebounding, and that’s what I am known for,” she said.

She fit right in with Raducanu’s no nonsense approach.

“I can take constructive, hard criticism because I feel it helps me get better,” Lauren said. “It was hard, but we had a connection.”

Early in her first season with Pelham, she was on in the final five minutes of games that were already decided, but by the time the OBAs (provincial championships) rolled around, she was a starter.

Last year, she was a key member of the Pelham under-14 squad that made it to Division 1 of the OBAs. And as her basketball skills skyrocketed, so did her height.

“She grew six inches from the time she started the season until she played in the OBAs (provincial championships),” Terry said. “By the end of the season, it looked like she was wearing little, short shorts.”

Last spring, she tried out for the provincial under-14 team on a whim and surprised herself by making the squad.

“It was awesome to see the different coaching style from Gord Everett and it was great to meet the girls because we are all like-minded,” she said. “We all really want basketball so it was a great experience.”

With Team Ontario, her post work improved dramatically with the help of an Ontario assistant coach and playing against bigger girls in American tournaments.

“I wasn’t confident because I never assume anything or that I am going to make it again,” she said. “There could be another girl who is a crazy, awesome player who comes in and takes my spot.

“I felt really good with how I played at tryouts and they ended up keeping almost the same team.”

This season, Lauren played for the Welland Warriors under-16 travel basketball team that played games in United States and had a number of exhibition games versus Ontario Scholastic Basketball Association teams.

Leading up to the national championships, Lauren and her teammates will attend plenty of training camps and compete in tournaments in Montreal, Chicago and Washington.

She can’t wait to try and win a national title with her Ontario teammates.

“Last year, the girls won so we have to hold up that title. I am so, so excited,” she said.

This fall, Lauren is planning to move to A.N. Myer and be a part of the District School Board of Niagara’s OSBA team.

“I want to take basketball far and the OSBA team will help me get there,” she said.

She has above-the-rim hopes for her basketball future.

“It’s a big dream, but I want to go to university, hopefully on a basketball scholarship and an academic scholarship because I have pretty good grades.”

Pretty good is an understatement considering she has a 95 per cent average despite her busy basketball schedule.

‘It’s easy for me because I am a pretty good student and I get most of my work done in class,” Lauren said. “And if I have homework, I do it before basketball practice. I make it work.”

She loves everything about the sport and it never feels like work.

“It’s the adrenaline rush you get when you are on the court and the hard work you put into it,” she said.