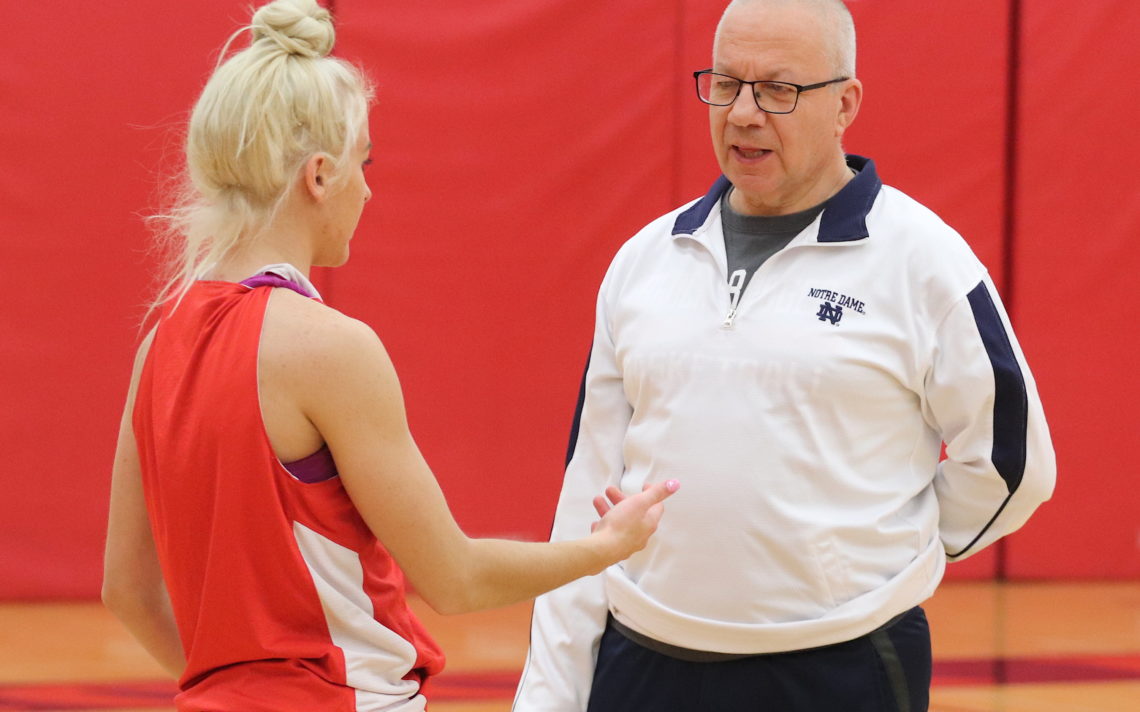 Mike Rao went into the role with his eyes wide open in August 2018 when he accepted the position of interim head coach of the Brock women’s basketball team.

“I’m not going to sugarcoat it,” the 62-year-old Welland native said, upon accepting the job. “Obviously I wasn’t their first choice, for sure, so I don’t have any illusion of that. I was at the table and other things didn’t work out.”

What did work out was having Rao as head coach of the women’s team. The long-time coach of the Notre Dame senior boys basketball team guided his squad to an Ontario University Athletics championship and a silver medal at the 2019-20 USPORTS championships. For his efforts, Rao was named the OUA and USPORTS women’s basketball coach of the year, the OUA men’s coach of the year and, sometime this year when the COVID-19 pandemic is finally under control, he will appear before St. Catharines city council and be presented with the 2020 St. Catharines Sportsperson of the Year Award.

“Winning anything in St. Catharines is big and this is beyond words.”

Rao had been serving as an assistant coach on the Brock men’s team under Charles Kissi for two seasons before he was asked to step in and help then women’s head coach Ashley MacSporran for the last five or six games of the 2017-18 regular season.

“I did that in an effort just to help,” he said. “They weren’t doing all that well and I didn’t make things any better.”

In April 2018, Brock Sports “parted ways” with MacSporran following a 6-18 regular season that saw the Badgers miss the playoffs.

With Kissi taking a job with Raptors 905 that spring, Rao spent the summer of 2018 helping out with the Brock men’s boys basketball camp and working out some of the Badgers’ returning players. Rao had planned to help then men’s coach Madhav Trivedi until he was no longer needed.

One morning, he came to help Trivedi and was told to go talk to Chris Critelli, Brock’s retiring assistant athletic director. Rao remembers the exact day he was offered the job because he wrote the date in his basketball journal.

“I can’t tell you what I did yesterday but if you ask what I did in practice on December 27, 1995, I can tell you. I write myself notes. ‘This worked. This didn’t work. I sucked.’ I do that so the year after I don’t make the same mistake.”

Rao asked for a couple of days to think about the offer because he had just retired and he and his wife, Pam, had planned a number of trips, including excursions to Portugal, South Bend, Ind., for a (Notre Dame) football game and a tropical destination.

“I talked to Pam and she ultimately made the decision. She has waited for me for basketball for 30 years and marriage has always been on the back burner to basketball in our household. She told me it was something that I always wanted to do so I better do it.”

With no time to recruit players, Rao scoured the halls for talent and was able to coax players who had quit the team the previous year to return.

One of those returning players was Jess Morris, who would end up playing a key role in Brock’s run to an OUA championship.

Rao was a breath of fresh air for her and others.

“He’s exactly what I needed for a coach in my university career and I am so grateful that I finally got one,” Morris told BPSN in January 2020.

Rao was the perfect fit for her.

“It’s a mutual respect thing. He treats us with respect and we give it right back to him,” she said. “He never makes things personal. Basketball is basketball and what happens on the court, stays on the court.”

Rao was able to prove the naysayers wrong by employing the same philosophy he used to guide the Notre Dame senior boys team to seven or eight Ontario Federation of School Athletic Associations championships and a berth in two OFSAA Final Fours.

Under Rao’s guidance, Brock went 11-13 in OUA regular season play in the 2018-19 season and knocked off Laurier in the first round of the playoffs before losing 81-70 to McMaster in the second round.

“We had a helluva game against Mac and a lot of people came. There was one minute and 57 seconds to go and we were only down one.”

McMaster ended up winning the game on the foul line and would go on to capture the USPORTS championship. Rao was drained at the end of the season and thought his job was complete.

“I am at the end of my career and I am not like the young guys wondering what is the next step and where am I going next? I thought we had a good year and I left it to them what they were going to do. In my mind, I had done the year and I was done.”

But Brock Sports had other ideas and it inked Rao to a three-year contract.

“Everyone thought we had done really well, but I saw a lot of holes to fill,” Rao said. “I thought we played hard, but I didn’t think we had anything special. But that type of play stayed with us and we improved and that’s what took us over the line.

“The beginning of the year didn’t start out that well for us but we kind of managed.”

At no point in the season did Rao think his squad would play for the national championship.

“That never comes into it. For me, it is one game or a group of games at a time. I thought we could compete and we did compete.”

Needing playoff wins over Windsor, Western and Ryerson to capture the OUA championship, Rao knew his team was a clear underdog.

“I’m not saying anything people didn’t think or know but they were better than us. I thought we had a shot against them but everything had to fall into place and it did. We just took it one game at a time and carried on.”

Rao felt there were many things that made the 2019-20 team special.

“Melissa Tatti, for sure. She had a lot of leadership and Kristin Gallant is just a hard-nosed type of player who gave us what we wanted. She did a lot of things for us that a lot of players don’t do. And then you add Sam (Keltos) coming in from (NCAA Division 1) St. Francis. It rounded us out. And then there was Jess Morris, Eden Ferraro, Sofia Croce and Jenneke Pilling. They all worked their hardest doing the jobs that we needed to get done.

“Everyone points to Melissa Tatti which I think is right but without the other pieces fitting in, I don’t think we do what we do.”

Rao didn’t get overly excited about the national silver medal.

“In the end it was satisfying, but they showed me a picture from the end of the game and the only person who isn’t smiling is me. I don’t know what that says. Maybe if we would have won I would have had the same facial expression.”

He admits the silver medal was important to him but he has already turned the page.

“I look now and we have more holes to fill and bigger fish to fry. We have to get better in this and that area. Once I get out of it, maybe I will enjoy it more. Not that it wasn’t enjoyable but my vision is ahead and I don’t want people to say you were only good for one year Rao and that’s it.”

He isn’t sure his team can return to the national championships in 2021-22 but knows his team must rebound better if it wants the opportunity.

“We have to have more second chances. We got outrebounded in every playoff game and we have to clean that up if we want to have a legitimate chance of moving on. I think we have some good players who will give us a good effort.”

Rao knows he is ultimately responsible for the team’s culture.

“I have to try and build relationships so we become a very unselfish team like last year. They were one of the smartest teams I ever had and they worked the hardest. They bought in.”

In the playoff games against Western and Ryerson, Rao added some defensive schemes on the fly.

“They were so smart that they were able to pick it up from the clipboard to the floor. It was seamless like they had been doing it for years.”

Rao, who started high school at Notre Dame before moving to Eastdale for Grade 10 and beyond because the school was across the street from his house, has certainly been coaching for years. 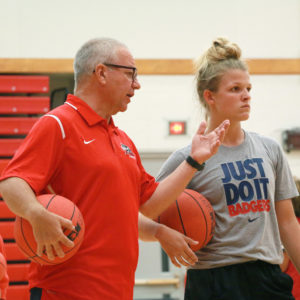 At age 14, he was coaching bantam boys in the Welland minor basketball house league. As he entered college when he was 19, he was hired to coach Notre Dame’s midget boys team.

He completed a business diploma at Niagara College and started working at Stelco. Rao was working his way up the management ranks at Stelco and the company told him to upgrade his academic qualifications to further enhance his trajectory.

He started attending Brock in 1979 with that goal in mind and then applied to teachers college on a whim. He gave back Stelco all the money the company had contributed towards his university education and never looked back.

His first teaching job was in Palmerston, north of Guelph, at Norwell District Secondary School. He lasted one year there before Notre Dame principal John Belcastro called him and offered him a job.

“I wasn’t going to go but he told my family and told my mother and that was a mistake,” he said, with a laugh.

He ended up coaching at Notre Dame from 1979 until 2017 and was the senior boys head coach for 19 years.

Following is a list of the winners of the St. Catharines Sportsperson of the Year Award: