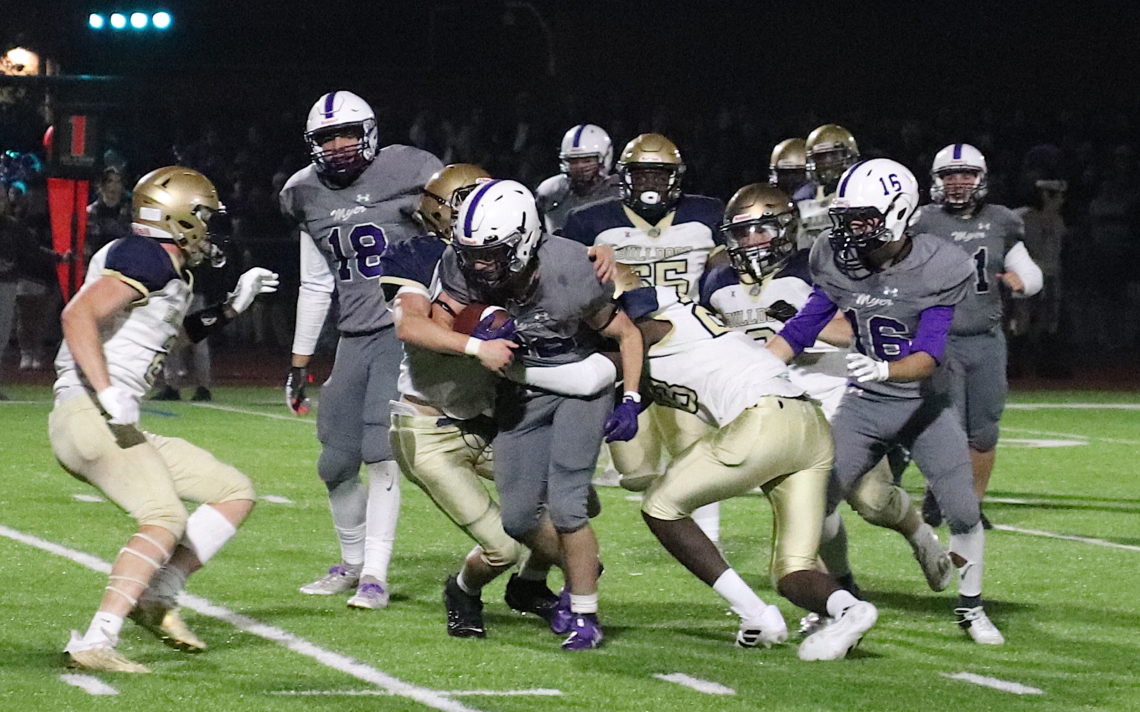 Defence was the name of the game as the A.N. Myer Marauders topped the Saltfleet District High School Storm 24-6 Wednesday at the Southern Ontario Secondary Schools Association senior football semifinals at McMaster University.

“We played very well defensively,” Myer coach Dave Buchanan said. “Offensively we sputtered a bit in the first half and then we figured some things out.”

Cam Papineau had a pick-six on defence which Buchanan called “a huge momentum changer.” He also cited Thomas Somerville and Arden Martinez, who played on both side of the ball and had a strong game, for their efforts.

The Marauders led 10-0 at the half before adding a pair of touchdowns by Evan Goforth, on a seven-yard pass, and by Connor McEachern, on a 35-yard run, to open things up. Hunt also booted a field goal.

Buchanan said the Storm were no pushovers.

“We had a bye week so we went and watched them. They played Westmount and we knew we had the loser of that game,” he said. “Usually, it’s kind of good for us (to play a team they don’t normally) because offensively we kind of shock people. The disadvantage around here is everybody knows us.

“They did a good job of scouting us too. We kind of knew what we were getting into. Both teams did a good job of evaluating that and they attacked us and forced us to do things we don’t necessarily do as well as we normally do. We modified things and changed and we were OK. I think basically it’s about who makes the best adjustments during the game and we made some good adjustments at halftime.”

Buchanan praised his charges for their poise.

“We were having some issues on offence and it can get overwhelming for them. These are big games and they are in new surroundings and they know one loss and you’re done.

“I think our guys did a pretty good job of not panicking. We got better at that this year because we were in closer games. We had better competition. This team is young, we only have a few older guys, and the younger guys are starting to learn how to win. You have to manage the ups and downs and that’s something they’re doing very well now.”

The Marauders, who now advance to the championship final next Tuesday at McMaster at 6 p.m. versus Westmount, will be back at it Friday on the practice field.

“We’re not taking the day off,” Buchanan said. “We know the winner is going to be a very good team. From the beginning, I said to the kids let’s try and get there and do our best to compete. They’re excited, anxious, all of that. We’ve done a pretty good job of not getting too high or two low.

“We know if we play well we can win, but we’re going to have to play really well in order to beat those teams and that’s to be expected at this time of year.”