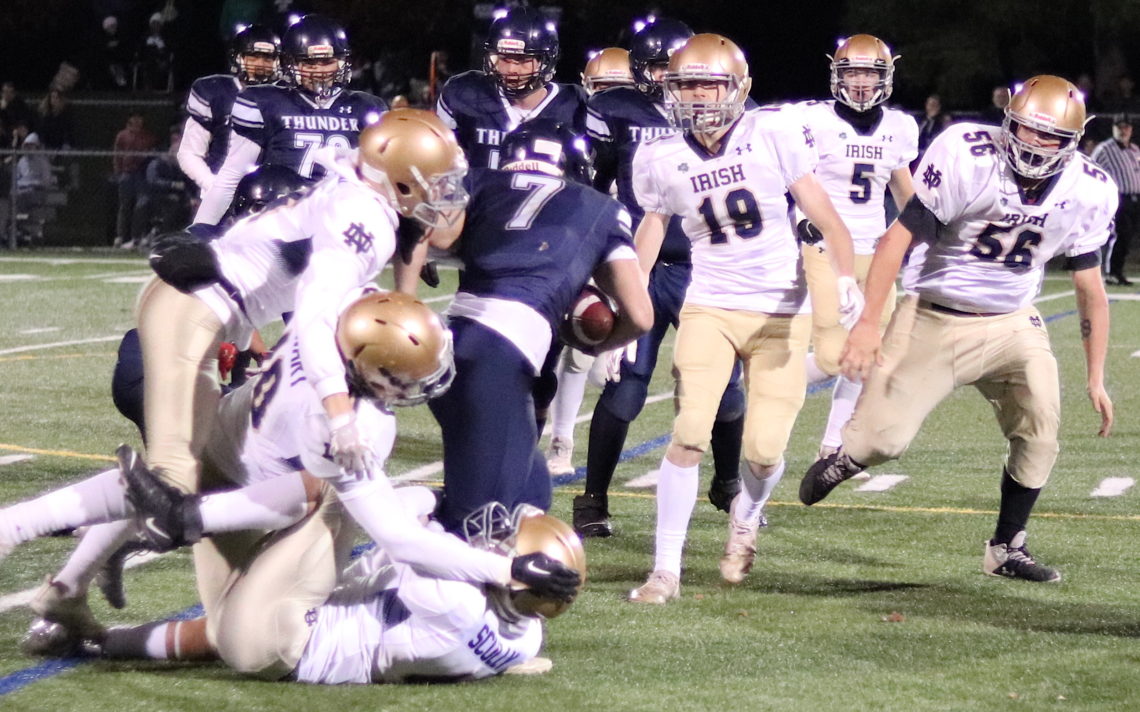 The program’s last loss came to Chaminade College in the 2019 Metro Bowl. The Irish were looking to win their third straight SOSSA Bowl and fourth in the past five seasons.

“We have lost one game in Niagara in five years and that’s a pretty good thing,” Notre Dame head coach Tim Bisci said. “I told the kids afterwards that they have been part of a generation of kids that have come in, bought into a program, turned it right around and made it into something special.”

It has been quite the run.

“We have had three different quarterbacks, four different running backs and a bunch of linemen come through,” he said. “It wasn’t just one kid either. It was a group and we have been fortunate year in and year out to have a different kid step up and do something special to help us win. It’s a shame that it has to end like this, but when it ends, it’s going to end.”

Notre Dame will lose a ton of talented players to graduation.

“We are going to be young and next year we will probably be as young as we have been in years. The last time we had a Grade 11 kid playing quarterback was 2015 and we had growing pains,” Bisci said. “It was a fun run and if we can keep it going that would be great. We might be a year or so away but the cupboard is not bare. It is just young and needs time to grow a little bit.”

Westmount, which defeated Saltfleet 34-0 last week to claim its fourth straight Hamilton-Wentworth Interscholastic Athletic Council title, scored on its first three possessions of the first half before Marshall McCray replied with a 55-yard TD run on a busted play to cut the lead to 14-7. The Wildcats responded with a touchdown of their own and the Irish had a chance to get a TD back late in the half but there was a dropped a ball on a long pass.

“The beginning of the game was ugly and I thought they would run us right out of the stadium,” Bisci said. “We didn’t have an answer for them. The first two times they had the ball they went down the field on us like we weren’t there. We just weren’t adjusting our linebackers and we couldn’t get into our run fits.”

Notre Dame has a young linebacking corps and it showed in the first half.

“They made young and inexperienced mistakes even though we are nine games into the season.”

Notre Dame’s defence adjusted and tightened up in the second half.

“The second half was a whole different game,” he said.

Dayshawn Johnson cut the lead to 21-14 on a long TD pass from McCray. Westmount conceded a safety and Notre Dame went into the fourth quarter down 21-16.

A long pass from McCray to Johnson set up a short TD run  by McCray. The Irish couldn’t convert a two-point convert and led 22-21.

“We had a couple of chances to move the ball late but the offence stalled,” Bisci said. “They made a couple plays, got a good spot on a third and two and kicked a field goal to go up 24-22.

“It was the only three points we gave up in the second half. We made enough adjustments to shut them down.”

With the victory, Westmount advances to play A.N. Myer in the SOSSA Bowl Tuesday, Nov. 22 at 6 p.m. at McMaster.