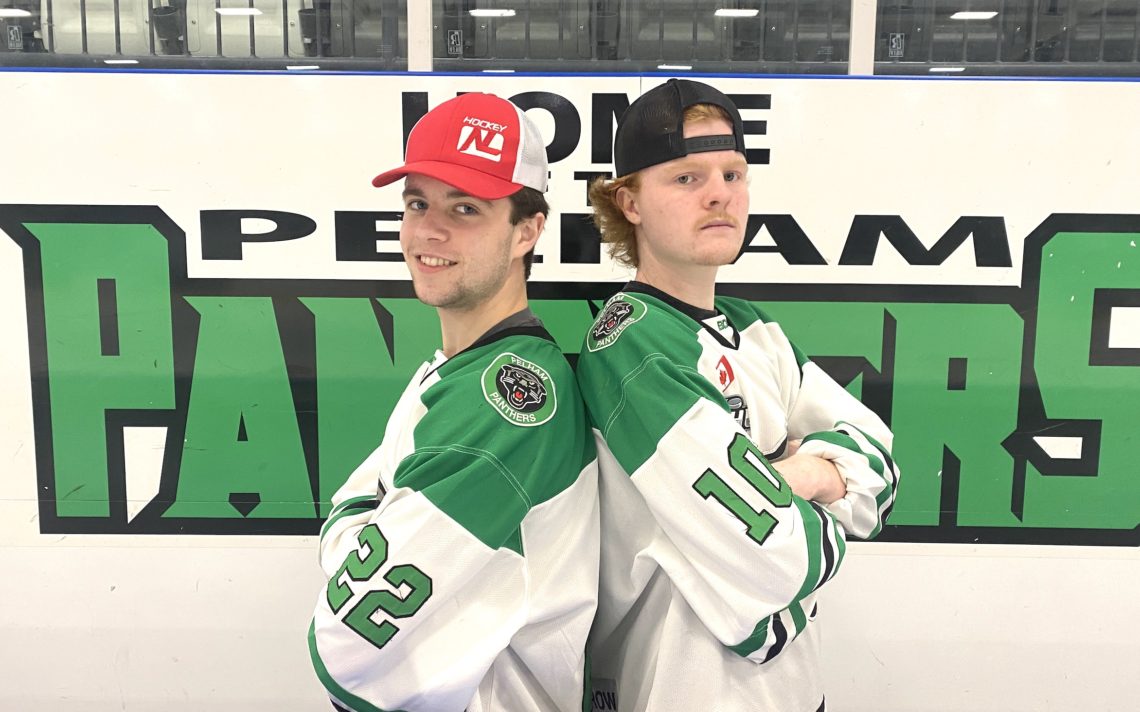 Newfoundland natives Tyler Curnew, left, and Liam Kelly are suiting up for the Pelham Panthers. Photo by: BILL POTRECZ

Liam Kelly and Tyler Curnew left their homes and families to travel halfway across Canada in pursuit of their hockey dreams.

The 18-year-old Newfoundland natives both landed with the Pelham Panthers, albeit via different routes.

Kelly went to training camp with the Timmins Rock of the Canadian Junior Hockey League but was dealt to the Panthers before the season began.

“I’ve heard of the league [Greater Ontario Junior Hockey League) because one of our buddies was here and I heard it was a really good league,” Kelly said. “Just made a decision to come to Pelham. I had some contacts with Tim (Pelham general manager Tim Toffolo) and it happened really quickly.”

Kelly said it didn’t take him long to acclimatize himself to southern Ontario.

“I love it,” Kelly said. “It’s a lot different from home, a lot more traffic on the highways and that stuff, but I love it. I love everything about Ontario. I’ve loved it since I left home.

“It was a pretty big adjustment at first. Obviously at home the population is a lot less. It was kind of hectic at first seeing how much goes on every day but it’s been awesome.”

“After minor hockey in Newfoundland there’s not a lot of options to play junior,” he said. “Guys have to move away from the island at a certain age to have our best chance at success.

“It sucks to have to leave home so early but it’s been awesome so far. It’s been a really great experience.”

The Panthers added Curnew two weeks ago which not only has helped them on the ice — the forward has two goals in two games — but has provided Kelly with a link to home.

“We played against each other,” Kelly said. “It’s a huge help to have another Newfoundlander here. I’ve been homesick sometimes missing home and family and friends but it’s been unreal to have Tyler here with me. We’ve been buddies and known each other for years. It kind of brings a piece of home to the mainland.”

Curnew, who was dealt to the Panthers from the Cochrane Crunch of the Northern Ontario Junior Hockey League, is billeting with Kelly at Toffolo’s home.

“I love living here,” said Curnew, who hails from St. John’s. “It’s awesome to have someone from back home to live with and talk about stuff going on back home.”

Curnew admitted he had no idea where Pelham was when he was traded.

“I had to look on a map and saw it was close to Niagara Falls and close to Toronto. It’s a nice location,” he said.

Curnew, too, quickly made the best of the situation.

Curnew said he was surprised at the speed of the GOJHL.

“It’s a lot faster hockey here than it is up north,” he said.

Off the ice, things are coming together as well.

“It’s a lot better in the room. The team is really gelling compared to other teams I’ve played with. It’s awesome. Everyone picks each other up,” he said.

Curnew is hoping to play at the at the next level.

“I love hockey and I’m trying to go somewhere with hockey, go to school somewhere and continue my career,” he said.

Toffolo said the Panthers, who have been decimated with an inordinate amount of injuries, are hopeful of getting some pieces back in the lineup soon.

“We’re getting there and very, very shortly we’ll be very healthy and able to move on,” he said. “We have to figure out ways around this. We’ve brought in some more players who are quite talented. It’s been tough. I don’t even know how you judge our performance. We’ve managed to do well enough because we’ve been able to stay in games. It hasn’t shown in points and the scores, but I don’t know how it could.”