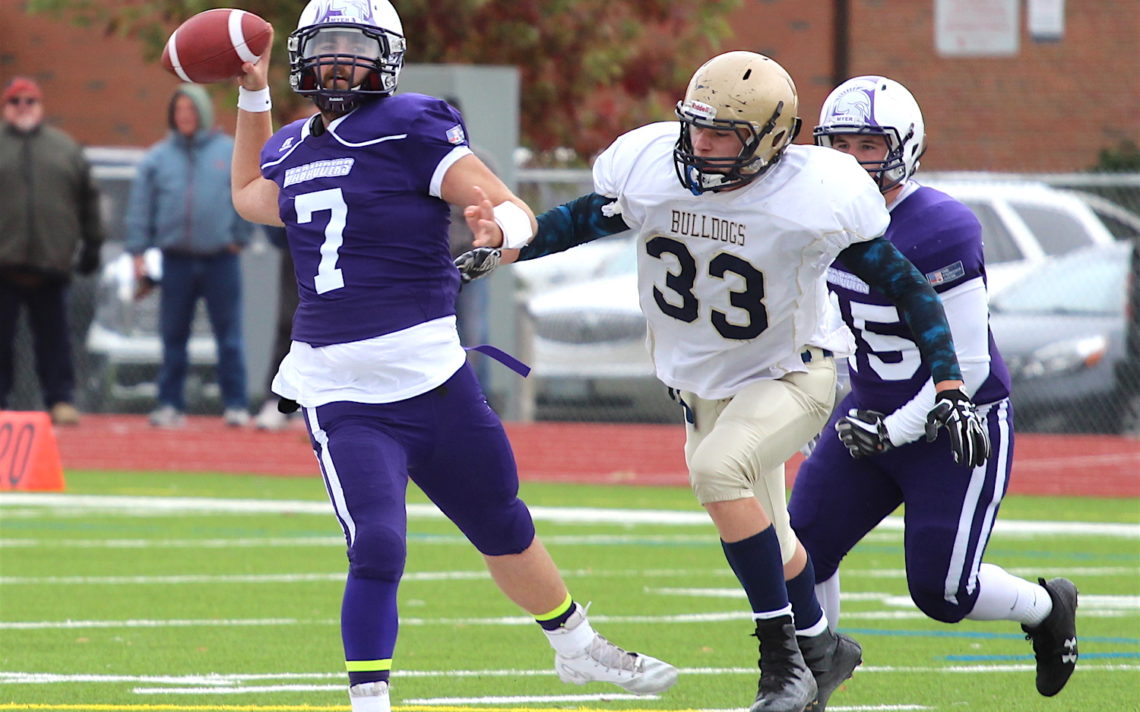 Reports of the demise of the A.N. Myer senior football team have been greatly exaggerated.

Despite losing several members of a star-studded cast that won three straight Ontario Federation of School Athletic Associations Bowl games, including dynamic brothers Tre and Tyrell Ford, the Marauders haven’t missed a beat during the 2017 season.

The purple and white followed up a perfect 5-0 regular season in Niagara Region High School Athletic Association Tier 1 play with a 42-0 semifinal victory over the visiting Sir Winston Churchill Bulldogs Wednesday. Since a loss to Saint Paul late in the 2014 regular season, the Marauders have reeled off 27 straight victories.

No one on the Myer roster had more Paul Bunyanesque shoes to fill than quarterback Ryan James, who replaced Tre Ford. The Grade 12 student transferred to Myer from Saint Michael last season and sat out a year, serving as the practice backup to Ford.

“They are definitely big shoes to fill but, so far, we are doing pretty good without Tre and Tyrell,” the 17-year-old said.

James and his teammates have been listening to the chatter all season that they aren’t as good as past versions of the Marauders.

“We still hear that all the time and we are trying to fight through it,” he said. “But I think we are turning a few heads and they are saying ‘Oh, Oh, Myer is actually good again.’

“Hopefully we can keep it going.”

“It’s the coaching,” he said. “The coaches have us out here every day in the summer and we always have numbers. The coaches do a good job of keeping us in it.”

Myer head coach Dave Buchanan deflects the credit back to his players.

“We had a senior group that had something to prove and some 12Bs who give us some strength physically,” he said. “They are good players and they’ve done everything they need to do to succeed on the field.”

The returning veterans have been bolstered by some impressive recruits.

“The Grade 11s coming up have been excellent and have been prepared well by the junior program,” Buchanan said. “Guys want to show that they can play too and I think that is the motivation for them.”

Myer’s coaching staff didn’t know what to expect when the season started.

“We weren’t sure because there are a number of X factors,” Buchanan said. “I knew we would have some skill but I didn’t know about the physicality because we were going to be a little bit younger.”

Buchanan is a long way from guaranteeing his team a return to the OFSAA Bowl, agreeing there’s lots of work left to do in Niagara.

“Saint Paul is strong and Notre Dame looks like the team to beat and they are,” he said. “They can run the ball, throw the ball and they are fast and big.

“But we have to first get through this (league) first and hopefully we will get a chance to play them.”

“When they come to practice, they rep everything perfectly and they have a number of good coaches there,” he said. “That certainly helps because the more coaches you have, the more mistakes you can correct.”

The Bulldogs hung tough for most of the first half with the Marauders Wednesday until a touchdown late in the second quarter made it 14-0.

“I’ve got to thank my coaching staff, Arthur Martin, Steve Cook, Scott Hill and Matt Walters,” Perron said. “We came in here with a game plan and we played a very tough first half.

It was a different story as the Marauders scored on three of its first four possessions of the second half to put the game out of reach.

“There was a bit of a letdown at the end, but that was varsity (junior and senior players combined) team playing against a very good senior team,” Perron said.

He is confident next season will be better for the Dogs.

“We have lots of Grade 9s and 10s that we have been developing and we have a great group of Grade 11s coming back,” Perron said.

He’s also predicting a great off-season for his squad.

“I’ve already talked to the Grades 9s, 10s and 11s and we are going to do a weight training program and rep things out on off days.”

Ethan Van Natter completed the scoring for the Gryphons by catching a TD pass from Jack Swanigan.

Up next: Myer hosts the NRHSAA Tier 1 championship game Nov. 9 at 7 p.m. versus Greater Fort Erie.