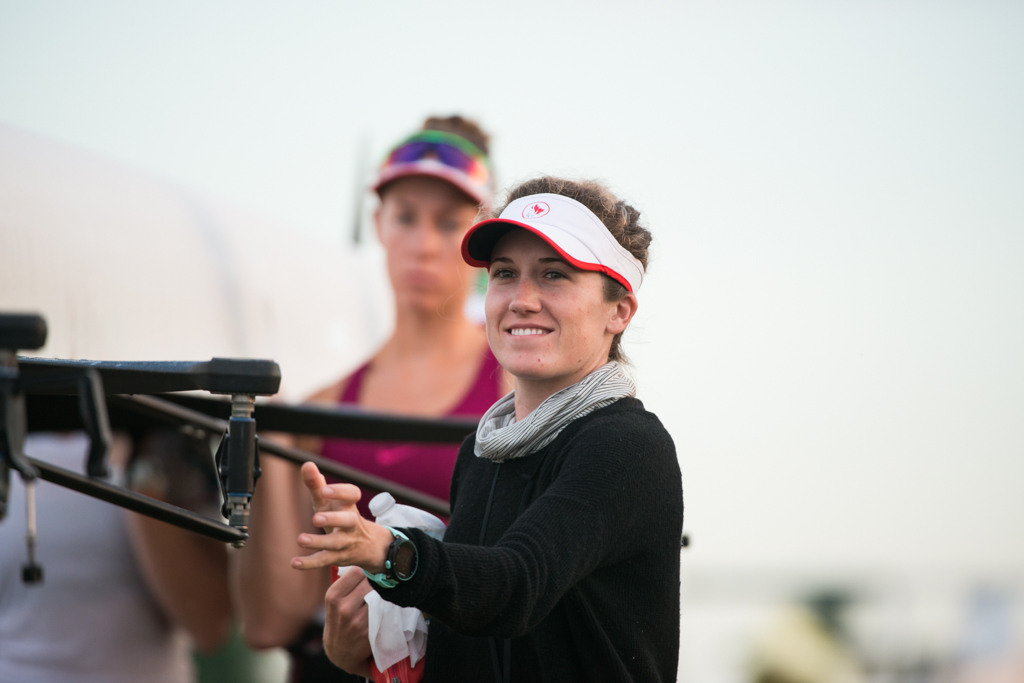 Kristen Kit is shown in action at the world rowing championships. Photos by MERIJN SOETERS.

After coxing Canada’s legs, trunk and arms mixed coxed four to a bronze medal at the Paralympic Games in Rio de Janeiro in 2016, St. Catharines native Kristen Kit thought she was done with rowing.

She enrolled in courses at the University of Victoria and started to think about life after rowing. But in early 2017, Rowing Canada implemented a number of changes to its programs and Kit was intrigued enough to want to check out the alterations. One of the changes was making coxing for the Olympic Games gender neutral. Women could serve as a coxie in men’s boats and vice versa.

“I thought I wanted to try out for the men’s team and that’s what kind of pulled me back into rowing; the opportunity to try for an Olympic medal with a men’s boat,” the Sir Winston Churchill alumnus said.

That was the initial plan, but in April after school finished, the former St. Catharines Rowing Club member started training with the women’s team. Speed Orders (team trials) were held in May and she was selected to the women’s team.

She spent the summer in London and became part of the eight that was selected to compete in 2017 world championships.

“They worked really hard during the summer, achieved a great level of focus and were diligent every single practice,” Kit said.

That hard work and attention to detail paid off in October at the world championships in Sarasota, Fla., when Canada’s women’s eight finished 0.69 second behind Romania to take a silver medal in the event. Canada passed New Zealand and the United States in the last 250 metres to claim the silver.

“I’m not surprised that we won a medal but I think that some people were,” Kit said. “We only had eight women for the eight and we literally didn’t have anyone else trying for a spot or even as a spare.

“Based on erg average, we weren’t the strongest boat on the water, so we exceeded expectations.”

Kit received a lot of credit for the triumph from crewmates.

“Kristen is the heart of this boat,” teammate Hillary Janssens said after the race. “Her passion is unreal. She is the glue. We are so grateful to have her.”

Kit deflected that praise to the entire crew.

Despite the success of the boat, Kit isn’t committing herself to stick around long enough to compete in the 2020 Olympics in Tokyo.

“If you asked me that question four years ago, I would have jumped and said yes,” she said. “But the sport is so volatile with policies, injuries, athlete changes, coaching changes.”

She is also focused on her education and is working on a degree in economics and is not sure that will lead to applying to law school or pursuing a masters in economics.

“I’m also an older athlete. At this point, I am 29 years old so I am trying to row one year at a time and not get ahead of myself.”

Kit went through the selection process for the 2016 Olympic team back in 2014 and wasn’t successful.

“I was pretty disappointed with the way the coxing seat was being run,” she said. “It’s an objective seat and a hard one to select for but I was disappointed because I really put my heart into it and it didn’t work out for me.”

And while she was disappointed with the selection process for the eight, like many people she believes things happen for a reason.

“I moved to the Para team and put my heart into that and I ended up with a Paralympic bronze medal which I am really proud of. And I got to work with athletes who I really respect.”

The Para crew was anything but second best in her mind.

“Some people said I was biding my time and waiting for the eight but that is not why I did it,” she said. “I put everything into the four and it was a blessing in disguise.”

Her time in the Para four helped her refine her skills as a coxie.

“When I am in a boat I am always focusing on one or two things to get better,” she said. “We lost the silver in Rio by 0.28 seconds and that taught me to take a risk, read the race, don’t be afraid to change things up and have confidence in the athletes.”

Kit started coxing when she was 13 and has been doing it for 16 years.

“Practice isn’t always that much fun but I love racing,” she said. “You do it because you want to have a chance at winning at an International level. I live for that.”

She has also found another way to get her racing fix, riding a road bike against Level 2 (pro and semi-pro) competition.

“I’m not very good but I get to race against some pretty good competition,” she said.

Kit, who came third in the elite/junior women division at the Ontario provincial championships, feels bike racing keeps her sharp for rowing racing.

“Being able to be sharp and race almost every weekend in the summer has helped me so much with my coxing,” she said. “It’s a different sport, yes, but you have to go through a warmup, the protocol and the pre-race jitters and then you have to be really focused in the race.

“The world championships was my only regatta of the summer but it felt like I had been racing most of the year.”

She gets more jittery riding bikes than coxing.

“I was more nervous for the Gastown Grand Prix  (part of BC Superweek, a series of nine races held over 10 days in July in the greater Vancouver area) than I was for the world championships,” she said, with a laugh.

Kit has lived in Victoria, B.C., since 2015 when she moved west to training with the Paralympic crew. She spent four or five months the last two summers in London, Ont. but Rowing Canada has decided to close the London training centre on Lake Fanshawe.

To help with her training, she received carding money and $5,000 a year for her tuition. It’s not enough to get rich, but enough to chase a dream.