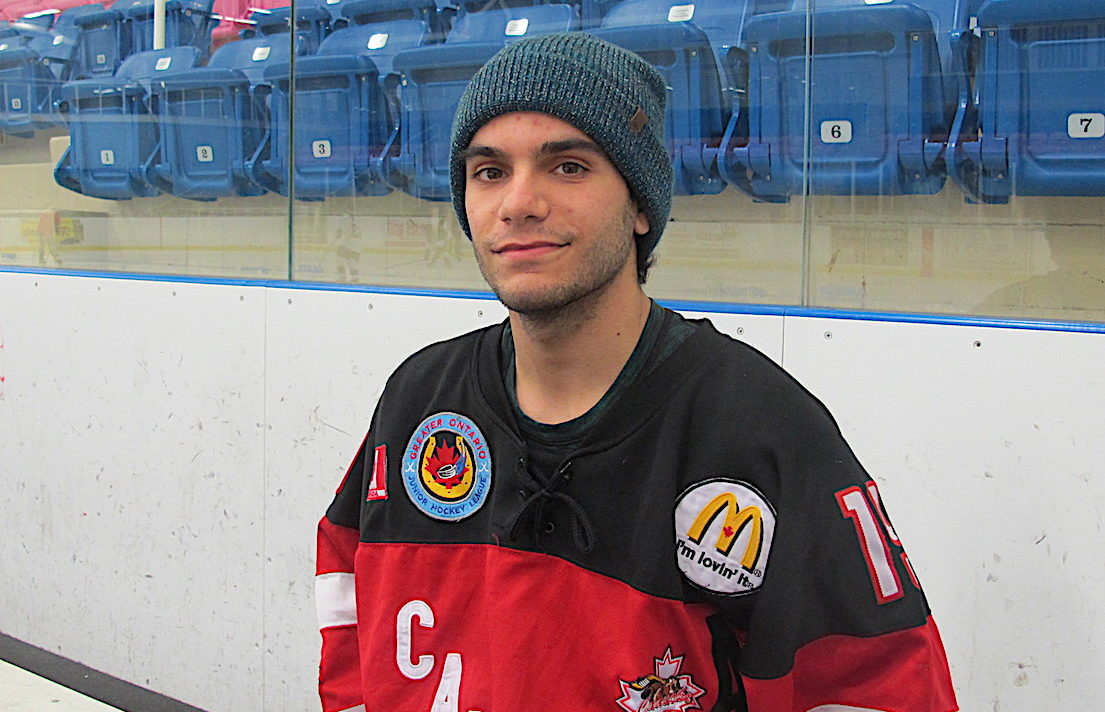 Caruso fits in with Canucks

Frank Pietrangelo took a chance on Matthew Caruso sight unseen, a calculated gamble that has more than paid off for the Niagara Falls Canucks.

The head coach of the Canucks signed Caruso on the recommendation of Frank Pucci and Andrew Barbeau, both of whom grew up playing with Caruso in Sault Ste. Marie.

“I watched him on line a bit but everybody just talked about his character more than anything else,” Pietrangelo said. “His points speak for themselves but everyone talked about his leadership skills and the kind of person he was and it’s been true to the point.

“He’s a solid person, a great person who cares. He’s leader and has everything we look for in a person off the ice.”

Caruso played the last three seasons for the Soo Thunderbirds of the Northern Ontario Junior Hockey League where he averaged more than a point per game.

“I always knew I wanted to get out (of Sault Ste. Marie) for my last year of junior, I just didn’t know where,” said Caruso, a speedy 5-foot-9, 165-pound forward.

Enter Pucci and Barbeau, who convinced Caruso the Canucks would be a good fit for his final season of junior.

“They told me they were going for a run this year, it’s our last year and we all grew up together,” Caruso said. “The decision was pretty easy when I made it because I had the support of them and they had so much to say about the organization and the coaching staff. They had nothing but good things (to say) so that made the decision easy.”

Caruso figured he would get more looks from scouts in Niagara than his hometown and didn’t want to look back and wonder what might have happened had he not taken a chance.

“I didn’t want have any regrets when I was older. I thought I would have more of an opportunity here,” he said.

Caruso has fit in like a glove with his new team with 14 goals and 32 points in 32 games.

“It’s been really great. They have been nothing but great to me,” he said. “I expected less than what I’ve got. I’ve taken it day by day and every day I get treated really well.

“It is different. The league is definitely better than the league I was in before. I moved away before so it didn’t take me very long to get adjusted.”

Pietrangelo admits it’s not always the case when an older player is brought it. There’s an old saying that 20-year-olds can be coach killers.

“We’ve had that here in the past, particularly guys with OHL experience and they don’t mesh in properly,” Pietrangelo said. “There’s an arrogance about them. They think they’re better than what they really are and it turns into a negative more than a positive.

“With Matt, he’s here for the right reasons. He’s a learner and a listener and a great kid and he plays in all the key situations.”

Caruso said his leadership skills have been part of his game for quite some time.

“Ever since I’ve been young I’ve been an assistant captain or captain one year,” he said. “Last year I was captain. It was my biggest test and I had to be accountable for my teammate and for the outcomes of everything. It was a big test and I learned a lot.

“I pride myself on being a leader on the ice by example.”

Caruso hopes to play at the Canadian university level next season.

The Canucks, 21-8-0-3, are tied with Ancaster for third place, just two points behind the St. Catharines Falcons for second.

They play their final game before the Christmas break Friday at home versus Welland.

“The break comes at a good time. We’ve been playing really hood hockey,” Pietrangelo said. “It’s a cluster between ourselves, St. Catharines and Ancaster. Our goal hasn’t changed. We want to be at the top or near the top so every game is important.”