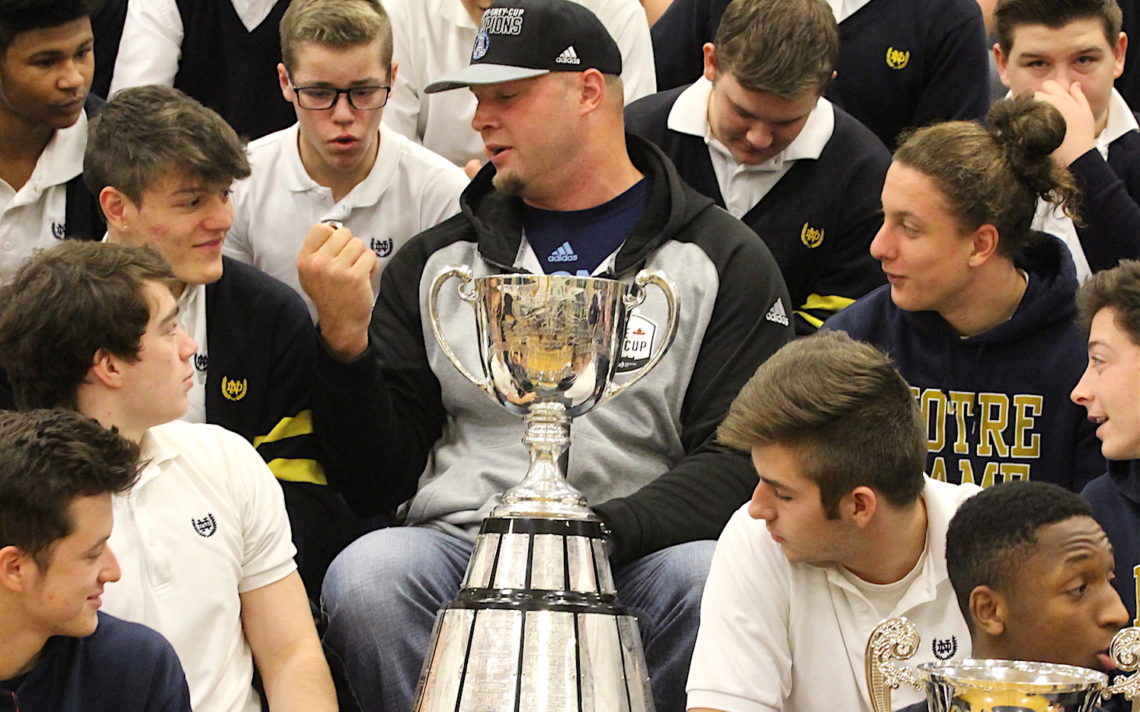 At 9 a.m. Monday, Chris Van Zeyl travelled to downtown Toronto, signed a waiver and took the Grey Cup into his possession.

As a member of the Grey Cup champion Toronto Argonauts, the 6-foot-6, 312-pound offensive lineman was looking forward to showing off the hardware to family, friends and the people who helped make him a three-time East Division all-star and CFL all-star. He had no concerns the cup wouldn’t be up to any challenge it faced.

“This thing is built like a tank,” he said. “Just pick it up and you can tell it has some weight to it.

“I’m not too worried about it. It’s built to travel.”

It is the second time he has brought the Grey Cup for a tour of Niagara and he loves the reception it receives.

“It’s watching how people of different ages react to it,” there 34-year-old Fonthill native said. “I’ve seen guys shed tears when they’ve seen this. I’ve seen kids try to tackle it. They don’t quite understand it but they are excited because it is bigger than them.”

As for how much alcohol was swilled from the cup in the hours preceding the Argos’ victory some things are better left unsaid.

“I can’t answer that question,” he said, with a laugh.

Much has changed for the CFL veteran since he last brought the cup to Niagara in 2012.

“I’m a little older and a little wiser absolutely,” he said. “You learn how to play smarter. It’s not so much about brute strength and being the most athletic on the field.

“You have to try and find a way to make all that work and (have) knowledge of the game and trying to understand what other guys are trying to do to you.”

On Tuesday, the cup began its day with a visit to Notre Dame in Welland, where Van Zeyl played for the senior team in 2000 and 2001.

“Today is not about me,” he said. “It’s about giving back to everybody that gave so much to me.

“You get football coaches that give their time freely and it’s all volunteer. They are helping kids.”

Van Zeyl’s appearance was inspiration for the next generation of football players.

“This is the dream and to be able to deliver this dream back to where I learned how to become this football player I am is all part of it.”

Van Zeyl credited his high school coaches for giving him the foundation to get to the next level.

“Everybody pushed us to go in the weight room and become better football players and not only that but to teach you about life skills and dedication.”

“At times, we had to discipline him because he would go off on his own,” he said. “I remember one time we were playing Lakeshore and he took two or three 15-yard penalties and I pulled him out. I gave it to him and then I put him right back in.”

Van Zeyl was a quick learner.

“He was coachable kid,” he said. “He knew where he went wrong and he took the discipline.”

Bisci saw tremendous growth in Van Zeyl from his Grade 12 to Grade 13 year.

“He came back for OAC and he was different,” he said. “He had matured in that one-year span and he became a real leader.

“Chris evolved into a real good football player and you could see than that there was promise for him to go to the next level.”

Van Zeyl was part of the first Niagara team to advance to the then-Metro Bowl playdowns in 2001 and was part of a Irish team that was ranked fourth in Canada in 2000.

Van Zeyl’s visit to Notre Dame started with a short speech to students at the school, including members of the junior and senior football teams.

“The message is to play as many sports as possible, do whatever you can right now and whatever you do, love doing it and have fun,” he said.

Afterwards, he posed for selfies with students, teachers and former coaches. The final pose was with members of the football teams and the championship trophies they had won in 2017.

Following Notre Dame, Van Zeyl had plans to bring the trophy to the workplaces of his family members in Welland and then a stop at in Fonthill.

“I am going to be in and around Welland for the majority of the day and then I am going to take it to Fonthill Fitness to meet with friends and members of the community,” he said.