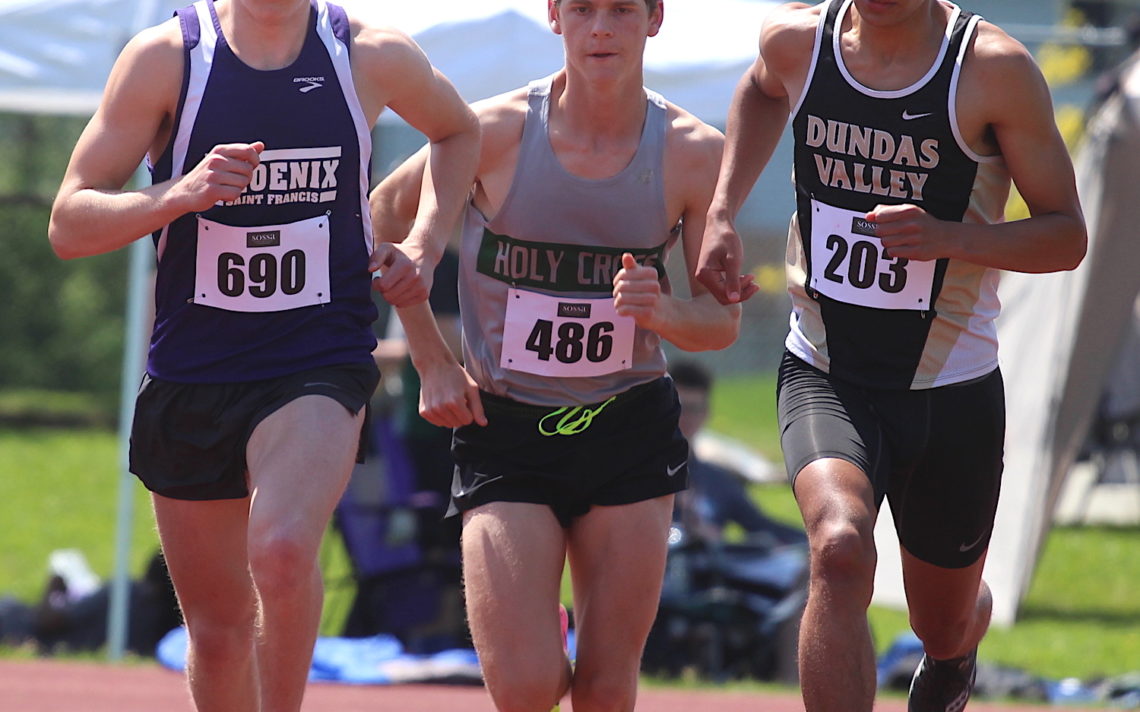 Campbell Lee, middle, is shown at the Zone 4 track and field meet.

Tutti won the senior girls shot put and discus and Lee topped the field in the senior boys 1,500 and 3,000 metres.

The Gymnastics Energy Women’s Artistic Gymnastics Compulsory Team (Level 3-5) competed in Ontario championships in London with the Level 4 team placing fourth among more than 100 teams in the team scoring.

Below are top 10 Team Energy results:

The Welland Paint Can Mustangs mosquito baseball team went 5-0 to win its first tournament of the season in Brantford.

Welland outscored its opponents 76-5, receiving strong contributions by all members of the team.

In a 27-1 win in three innings over Kitchener, Jaxon Vanderlip went the distance on the mound for the victory and was aided by three double plays. Game MVP was Zoe Falardeau for her performance at the plate.

In a 14-0 win over Blenheim, Mason VanDyke started on the mound and was his dominant self.  He was followed up by Falardeau, who once again earned MVP honours.

In the final game of round-robin play, Vanderlip’s grand slam led Welland to a 22-1 victory over Port Dover. Tyler Ray added a home run and multiple hits were added by Jack Ilskens, Trent Groulx & Jacob Doucette. On the pitching side, Doucette combined with Spencer Burke to control Port Dover. MVP honours went to Travis Guttin for his strong defensive play.

In the semifinals versus Beamsville, starting pitcher and MVP VanDyke went toe to toe with his Beamsville counterpart through five innings. Welland carried a 3- 2 lead into the seventh before allowing Beamsville to pull even in the top of the inning. In the bottom half, Falardeau lead off with a double and later scored on a single by Doucette. Tyler Ray, in relief, picked up the win.

In the final, strong pitching by Ray and Doucette saw the Mustangs mercy Halton Hills 10-0 in five innings. Great defence in the outfield by Vanderlip and Alex McQuillan, hustle by Ozzy Gulla leading to the first run of the game and big hits from Spencer Burke and Josh Lamb led Welland to victory.

Tournament MVP honours went to Doucette for his great play at the plate and on the mound.

Dressage Niagara, boasting a new show venue and three EC Sanctioned Bronze & Silver Shows on the schedule for 2018, held it’s first show of the season at Effingham Stables in Fenwick.

Dressage is compared to figures in the skating world, with subjective judging, and marks out of 10 for each element performed on a set pattern, executed at letters spaced around the ring, in a 20×60-metre outdoor arena. Scores are based on accuracy and training, performing each element at the assigned letter, and demonstrating the basics of the elements progressing to execution at the highest level, with balance, and thoroughness, and consistency. Various figures are performed at walk, trot and canter, demonstrating flexibility, suppleness, balance, impulsion, submission, rider’s position and effectiveness, and the overall pleasing presentation of the horse and rider as one.

Dressage Niagara’s next event is a clinic format Through the Judge’s Eyes June 24. Dressage and eventing competitor, coach and judge Jackie Bellamy-Zions will provide immediate feedback on the riders test and help to improve the test elements for next show. Details are available on the DN Website www.dressageniagara.com

To join Dressage Niagara or to become involved in Dressage showing, volunteering, or for more information visit the website or Email info@dressageniagara.com.