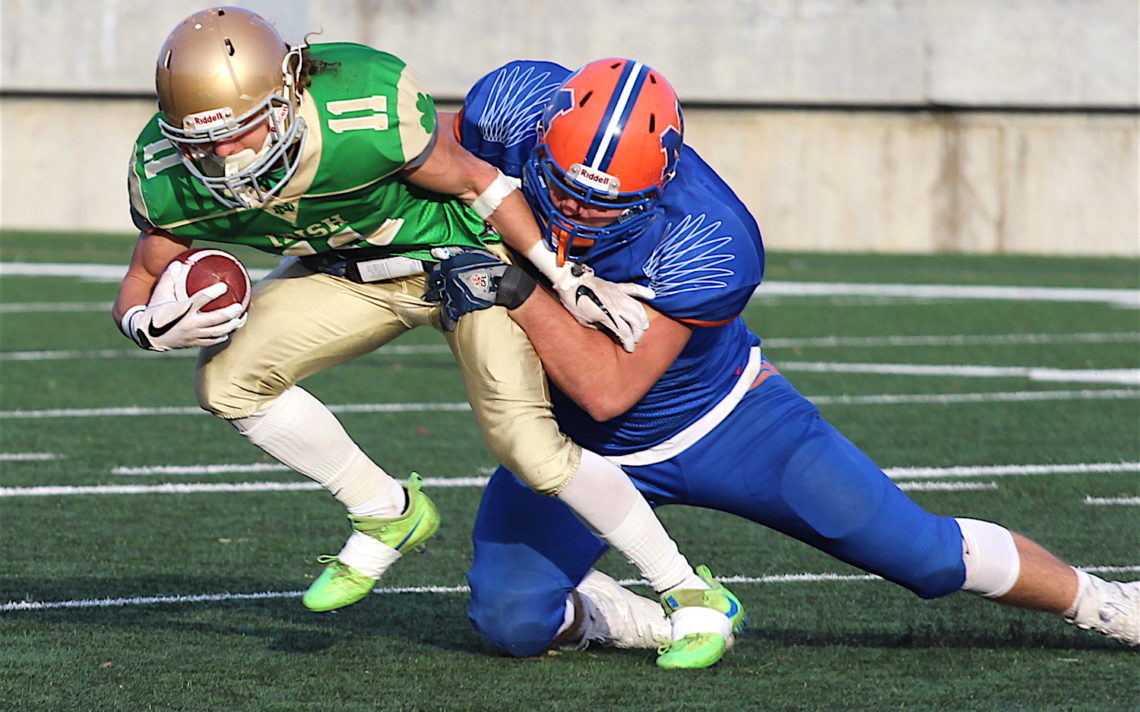 “We worked hard all year and we’ve never gone this far in football,” Notre Dame receiver/kicker Jonah Gruarin said. “My first year we went 0-6 and last year we won three games and lost in the semifinals. This feels amazing.”

The 18-year-old and his Irish teammates knew even before the season started that Notre Dame had a chance to do something special this season.

“In the summer, we were looking at all the players we had and we knew we had a lot of good Grade 10 players coming up to Grade 11,” the six-foot, 180 pounder. “We worked hard and we did what we could.”

Notre Dame head coach Tim Bisci felt his team would be competitive but wasn’t projecting a SOSSA Bowl in the immediate future.

Winning the school’s first SOSSA Bowl in a dozen years was a sweet feeling for Gruarin.

“I heard the last time that they lost in the OFSAA Bowl so we are going to do our best to change that,” he said.

The 12B student played a big role in making history Tuesday, having a strong game kicking the ball and catching TD passes of 50 and 22 yards from Graziani. In Notre Dame’s last three games, Gruarin has caught TD passes of 100, 75 and 50 yards.

“We have one play that we always go to and it’s me and Brandon,” Gruarin said. “He always throws it and I run the rest of the field and get there.”

What the play is will remain a mystery for at least one more week.

“We will keep it on the down low until next game if we win,” he said.

Gruarin’s talents are an essential part of the mystery play.

“He runs by guys and he has deceptive speed,” Bisci said. “At the end of the day, he catches the ball, guys are on him and he swats them away and just keeps going.

“Once you get him in space, he is tough to bring down.”

He’s also one of the Notre Dame players who was around for the dark days of the program.

Notre Dame had a narrow 15-6 lead at halftime with the Irish chalking up 156 yards in total offence and the Lions totalling 136.

The Irish took command in the first seven minutes of the second half, thanks to touchdown runs by Graziani and Justin Succar. They then put the game away with the 50-yard TD pass to Gruarin on the last play of the third quarter. Notre Dame would end up scoring majors on its first four possessions of the second half.

“We made a couple of adjustments and looked at the way they were lining up to our sets,” Bisci said. “We tried to find some weaknesses and we found a couple of them.”

“Graz being Graz, he took the game over and he was the best player on the field again,” Bisci said.

Graziani was too banged up to practice in the days leading up to last week’s Niagara Bowl, but he seemed to be moving better Tuesday.

“He has another week to get healthy for the next game but he’s still sore and his arm is still sore,” Bisci said. “He’s been banged up for the last three weeks but it doesn’t matter. The kids just shows up and plays.”

Notre Dame’s defence also showed up and played Tuesday. Although it surrendered 334 yards of offence, it bent but never broke led by the play of Grade 11 players Zack Melnyk and Gerrid Holton, both NCAA all-stars on offence and defence.

“They have an edge to them when they play and they go hard after it,” Bisci said. “We need guys to play like that because next week is going to be a tough opponent.”

BPSN Star of the Game: Jonah Gruarin, two TD catches and a strong game kicking the ball in windy conditions.

For the Sir Allan MacNab Lions: TD passes of four and 10 yards from Quincy Vaughn to Jack Morin; Vaughn, 10-yard TD run and 17-30 passing for 257 yards.

Up next: Notre Dame advances to the Golden Horseshoe Bowl Nov. 28 at 7 p.m. versus St. Thomas More at Tim Hortons Field in Hamilton.