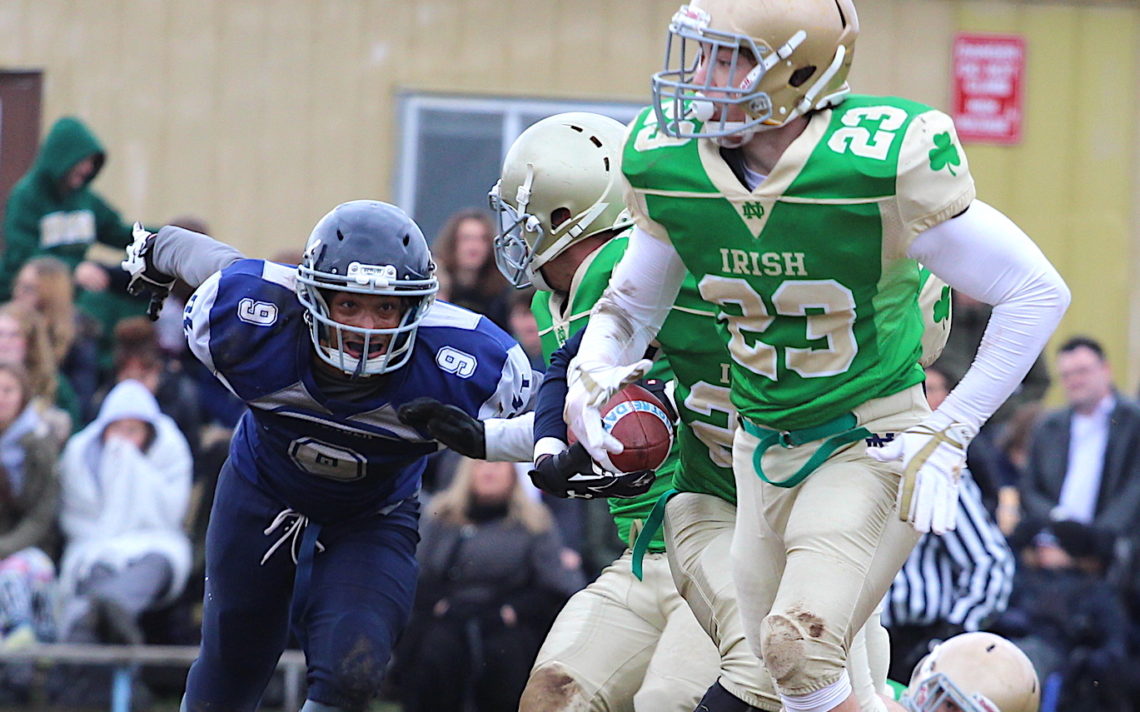 “Omigod,” the 18-year-old said. “It feels so great and it’s very surreal. It’s like Peyton Manning riding off in the sunset and I am happy for everyone.”

The six-foot, 175-pound quarterback was every bit a star like Manning Thursday, rushing for a pair of touchdowns and throwing for two majors for good measure, including a 100-yard bomb to Jonah Gruarin.

After winning four games in the previous three years, the Irish completed a perfect 8-0 run in NCAA play and fulfilled a dream many of the seniors had after watching Notre Dame win the junior championship on its home field in 2016. 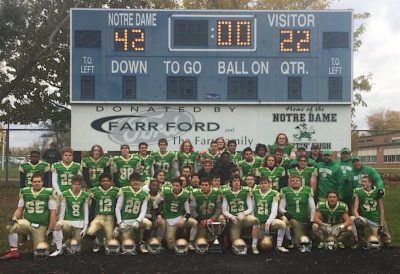 “Our journey started the day the juniors won. We knew last year when they won, we wanted to have the same feeling this year,” Graziani said. “For the seniors and Grade 11s who haven’t won before, it’s a great feeling.”

“Graz (Graziani) and Jake Porter were 0 and whatever their first year and we won three games after two years,” he said, “Now we’ve run the table and we’re 8-0.

“It’s a big deal for them and they should be excited with how things turned out because that’s an 180-degree turn from their Grade 11 year.”

Graziani, a 12B student, complimented Blessed Trinity for playing a great game.

“Their defence is very well-coached and they made some great plays on offence,” he said. “Congrats to them on a great season. They have nothing to hang their heads about.”

It was the first championship for Notre Dame since 2013 when the Irish scored a TD with 12.8 seconds remaining to beat Lakeshore Catholic.

Bisci agreed Thursday’s game was closer than the final score indicated, but felt his team hurt itself once again with too many penalties.

He also didn’t like his squad giving up more than 400 yards in total offence.

“We bent but didn’t break and they had long fields all game long,” Bisci said. “Eventually they made mistakes, but next week we can’t give up that many yards in offence.

“We have to be better defensively and a little more time consuming on our offence.”

Blessed Trinity did a lot of good things in the game despite losing. The Thunder rolled up 21 first downs and 417 yards of net offence and were in the thick of the game until late in the third quarter.

Despite falling behind 14-0 before the game was two minutes old, the Thunder were down 28-14 and driving the ball late in the third quarter when Notre Dame’s Zack Melnyk picked off a Thunder pass at the Irish six-yard line.

“The boys played hard and we threw everything at them,” Thunder head coach Mark Antonelli said. “Special teams were a struggle for us today and generally that is something we pride ourselves on.”

The Thunder gave up a 90-yard kick return for a score on the first play of the game, botched a punt attempt that gave the Irish possession of the ball on the Thunder’s two-yard line, and allowed Notre Dame to recover an on-side kick in the fourth quarter, which the Irish scored on and put the game out of reach.

“That’s something the coaching staff has to reflect on but we will be back next year,” Antonelli said. “We lost to the better team today and, quite frankly, that’s the best team in the entire region in my honest opinion.”

After getting blown out by Notre Dame in the regular season, the Thunder fared much better Thursday thanks to the much-improved passing of Xavier Hamidu.

“We knew we needed to change things there, just like the defence, and we gave them a goal,” Antonelli said. “Our offence was very successful today but unfortunately special teams was the name of the game today.”

The Thunder will lose several excellent players to graduation, but will receive an injection from the school’s NCAA’s junior championship squad.

“There is no time to rebuild,” Antonelli said. “We are reloading.”

The Irish now turns its focus to A.N. Myer in next Thursday’s championship game at Kiwanis Field.

Up next: Notre Dame will play A.N. Myer in the Niagara final Nov. 15 at 7 p.m. at Kiwanis Field in St. Catharines.