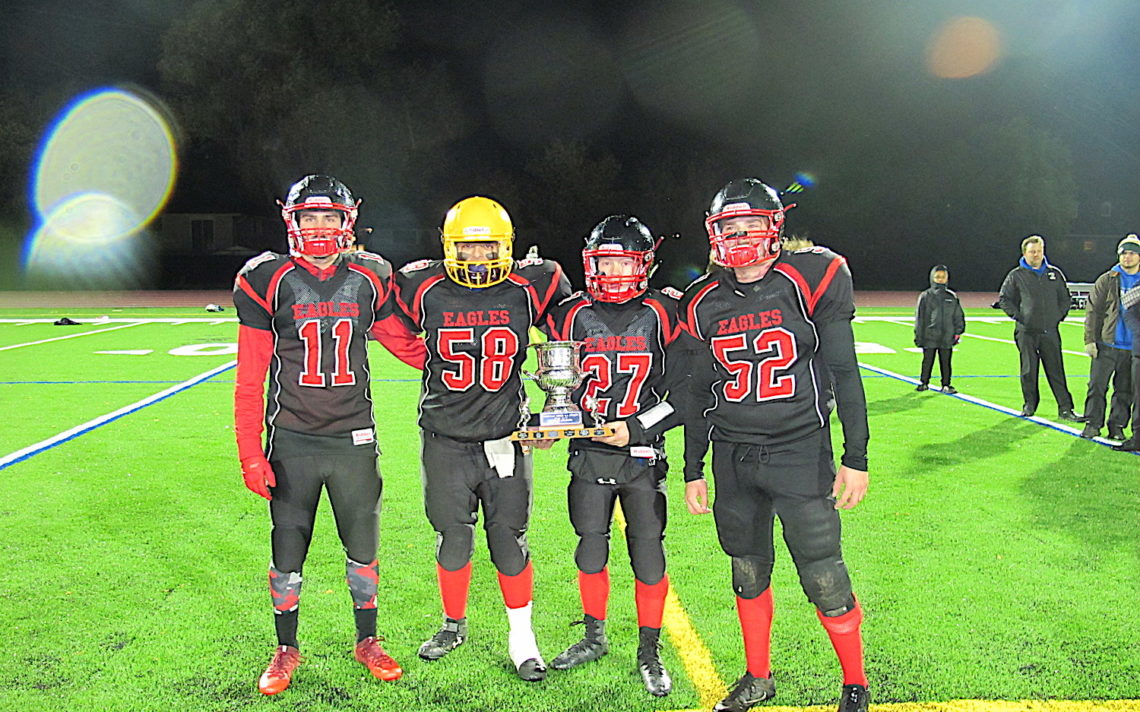 Nate Joyner and Mike Killins were too hot for the Eden Flyers to handle Thursday.

On a ridiculously cold and blustery night at Governor Simcoe, Joyner and Killins hooked up for a pair of touchdowns to pace the Grimsby Eagles past the Flyers 14-7 to capture the Niagara Region High School Athletic Association Tier 2 football championship.

Joyner, a 17-year-old, Grade 12 student, hit Killins with a pair of 30-yard passes to give the Eagles their first championship in seven years.

Joyner loves playing with Killins, who is a year his junior.

“We’ve played together at our old school (South Lincoln). We’ve played many sports together,” Joyner said amidst the post-game celebrations. “There’s just something about him.

“Maybe it’s a small thing. We’re the smallest guys on the team but we just click. We just went with it.”

Killins was almost at a loss for words.

Killins said there was no magic formula that led the Eagles to the title.

“Just come in and block and tackle and work our hardest,” he said. “Just go all out on the field.”

“Nate has played slot for the last two years. Our quarterback (Ryan Kajaste) separated his shoulder and Nate filled in and Killins caught some clutch passes.”

Justin DeFaria also stood out on both sides of the ball as a receiver, kick returner and place kicker/punter.

“It makes coaching a lot easier when you have great players and he’s a good one,” Silverthorne said. “There were universities here watching him tonight. They know who he is.”

Silverthorne was thrilled beyond belief his club was able to climb to the top of the mountain in such quick order.

“Our goal was to bring the program back and win a game, if we were being honest with ourselves,” he said. “We end up going 5-1, win a squeaker last week, and then this is crazy. Right to the final seconds and three yards.

Silverthorne was amazed how quickly the team came together.

“We just kept getting better and better,” he said. “Our attendance was good and the kids bought in.

“This is great. Recruiting will go up. Kids will want to play, our helmets will match next year. This just feels fantastic.”

Eden opened the scoring on a 22-yard pass from Blake Maude to John Tolentino in the opening quarter.

The Eagles answered back with a major of their own in the second to tie the game at 7-7, then took the lead early in the third when Joyner and Killins hooked up for a second time.

That appeared as though it was going to be enough but the Flyers had one last gasp left, driving the ball to the three-yard line before Maude was tackled on the final play of the game as time expired.

Coming so close left many Flyers in tears, but head coach Jordan Smith would have none of that.

“I’m always proud when football games are exciting and this was one of the most exciting games I’ve ever been involved with,” he said. “I’m grinning from ear to ear.

“It was fun. The kids are emotional about it right now but I hope it motivates them for next year.”

The elements came into play all game, as did penalties.

“We struggled a lot with discipline and penalties,” Smith said. “We gave Grimsby their first touchdown; we let them march all the way down the field on flags.”

Smith loved the atmosphere of playing under the lights on a new artificial field in front of hundreds of fans.

“It was the first championship game for the school. Maybe the pressure of their peers got to them early on but it was a learning experience.”