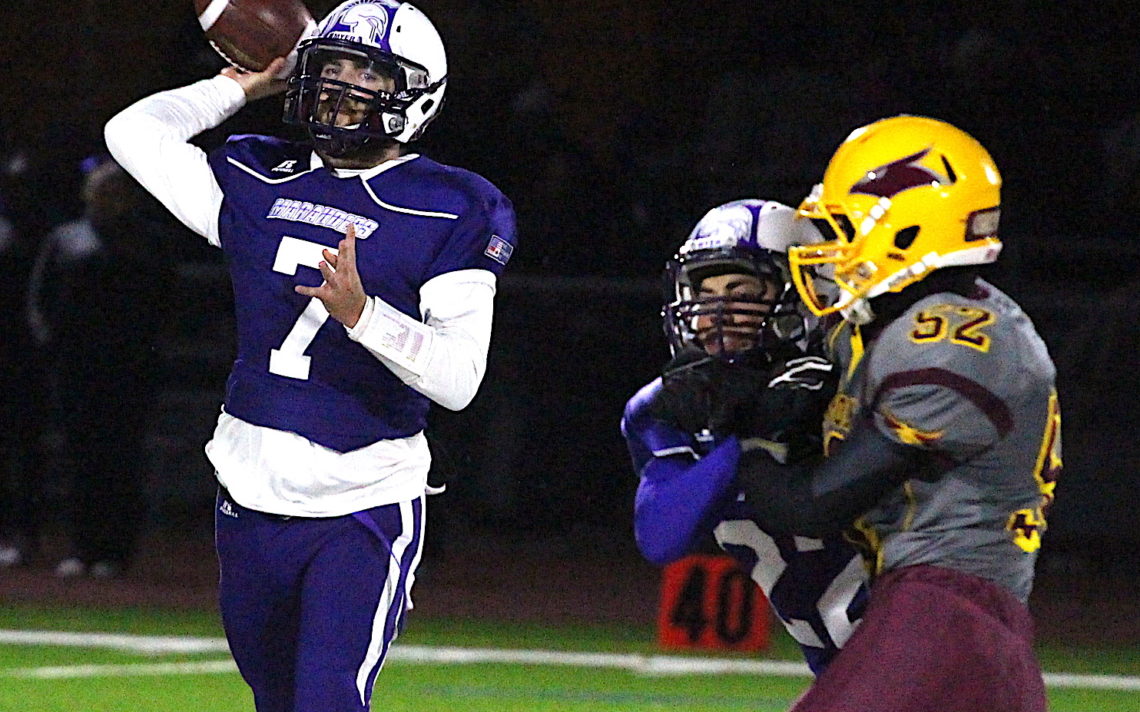 28 straight wins and counting for Marauders

The Greater Fort Erie Gryphons want to be just like the A.N. Myer Marauders.

Unfortunately for the new school playing in its first year of Niagara Region High School Athletic Association Tier 1 senior football, it has a ways to go as evidenced by the Marauders’ 41-0 victory over the Gryphons Thursday night in the championship game.

The Gryphons can take solace that they are not alone in getting defeated by Myer. The three-time defending OFSAA Bowl champions have now won 28 straight games and haven’t loss since late in the 2014 season. 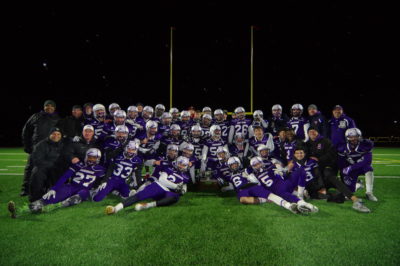 “My goal for the season was to get here so it’s a huge accomplishment, but I am disappointed for us today,” Greater Fort Erie head coach Dave Sauer said. “It’s hard because we aren’t at their level yet but hopefully we are soon.”

Sauer is predicting a great future for his team which has only three 12Bs on its roster and a junior team that made this year’s NRHSAA final.

“We have a great core of young kids who are coming up and we are building the program the way I want to,” he said. “I think in a year or two we are there.”

“That’s an up-and-coming program and I think we are going to be facing them for a while,” he said.

Myer is excellent for a whole bunch of reasons, Sauer said.

“They are well coached, fast, athletic and big.”

Running back/halfback Josh Lisi, who had a pair of touchdowns in the championship game, believes winning is an attitude.

“We always go in with the mindset that every team is out there to beat us and we’re No 1 and haven’t been beaten in more than two years,” the 17-year-old said.

For Buchanan, staying on top is an ongoing process.

“We win the rep game in the off-season,” he said. “We throw so many passes and run so many routes.

“My guys commit and the expectation here is you’re spending time training in the off-season. They know that and they enjoy being successful.”

“Now that it’s rolling and they see how guys work, that’s just what we do,” Buchanan said. “It pays off because, for a high school team, we catch and throw the ball pretty well.”

Epitomizing that work ethic is Lisi.

“Josh is just heart and soul and he’s a great kid,” Buchanan said. “He’s great in school and he’s great in how he represents himself and his family.”

Lisi has taken his game to another level by getting faster, catching the ball better and improving as a defensive back.

“A lot of people look at him and think he’s tiny but he is tough as nails,” Buchanan said.

Lisi has to be tough considering he’s 5-foot-5 and weights 150 pounds.

“Everyone looks at me like I am just another short kid out there and easy to go by but I am more than that,” he said. “To make up for it, I go in thinking I am the same size as everyone else and I am just another player on the field. I go as hard as I can.”

Lisi has more responsibility with the team on and off the field this season.

“Considering the weather and the fact that we are a passing team, we can struggle some times, but we managed to throw the ball decently and I thought our run game was awesome,” Buchanan said. “A lot of people don’t think we can play the run game and pass at the same time but we can.”

They definitely can considering they chalked up 537 yards in net offence on a night that saw snow and rain blowing sideways at the players.

Next up for Myer is Notre Dame in the Niagara final.

“They are a big and strong team and I’m hoping our speed and skill can make up for that,” Lisi said.

Up next: A.N. Myer will play Notre Dame in the Niagara final Nov. 15 at 7 p.m. at Kiwanis Field in St. Catharines.