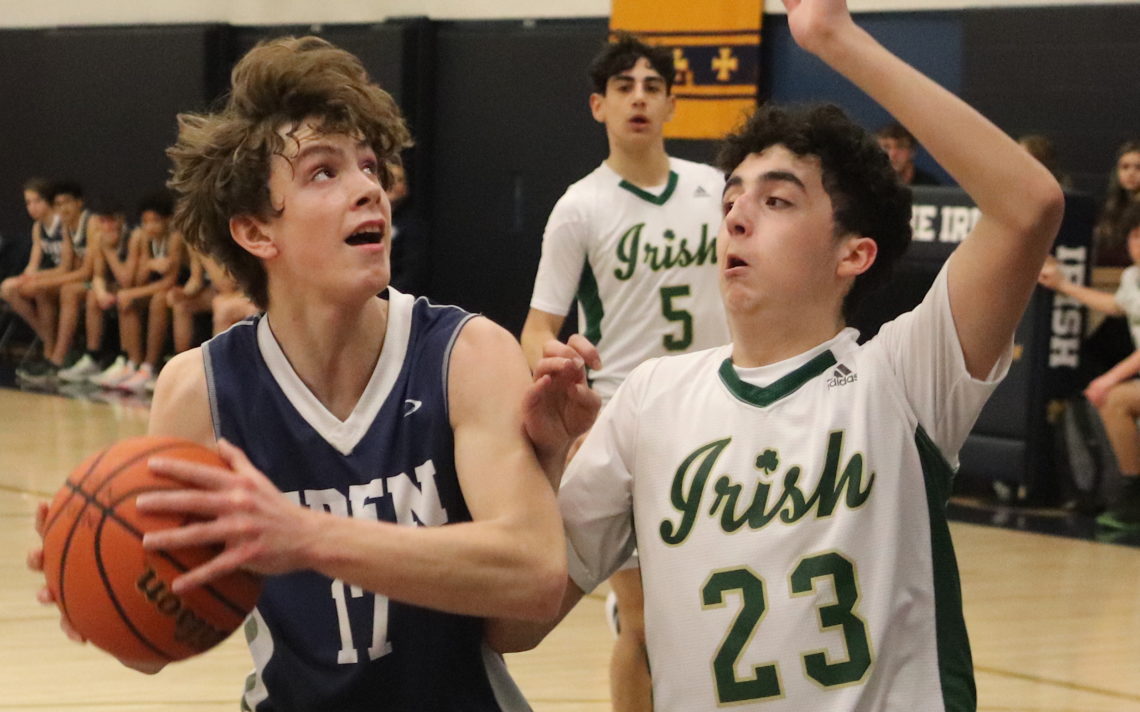 With a spot in the junior championship game of the BPSN Best of Niagara Boys Basketball Tournament on the line Thursday at Notre Dame, it was only fitting the ball ended up in the hands of Andrew Benko with the game on the line.

The Grade 10 student at Notre Dame didn’t disappoint, hitting a game-winning trey with 18.1 seconds left to lift the Fighting Irish to a 68-65 triumph over the Eden Flyers.

“He is the heart and soul of this team,” Notre Dame head coach Wade Pychel said. “He is the guy that I ask to do all the stuff that no one else wants to do because I know he can do it. I give him liberties on the floor to take those shots because I know he will make up for it if he misses it.

“Lucky for us, he made the big one that we needed.”

The 6-foot-1 player was ready and willing to take the deciding shot.

“There was no hesitation. I missed the first one and I was like ‘I want this one again.’ Everyone in the stands was going wild and I had an open shot,” the 16-year-old said. “I had to let it fly.”

The Game 10 student lives for the big moment.

“I am not shy to take the shot. I want that shot.”

The Niagara United travel player, who plays on that team with Eden’s Luke Johnson and Luke Midgley, also takes a lot of pride in doing the dirty work for his team.

“I am always the one setting screens, taking it at the bigger guys and I am not afraid to guard the best player.”

Thursday’s game was an excellent encounter between two talented teams. The squads exchanged runs and the lead with Notre Dame leading 19-18 after one quarter and Eden holding 40-34 and 53-52 advantages after the second and third quarters. The fourth quarter was a back and forth affair, featuring four lead changes and three ties.

“It was a great game. You have two well-coached teams, two great players and all these guys know each other because they play travel together,” Eden head coach Paul Sanecki said. “They shot the ball particularly well from three and they got the last bucket. It went back and forth all game and I am proud of my guys.”

“That was a great game to play in,” he said. “We told the boys at the beginning that these are the fun games you want to play in. You want to play in the close ones because those are the ones you will remember as you get older. It was basically last basket wins.”

Benko loved playing in the game.

“That was incredible,” he said. “Shout out to Eden. Those guys put up and amazing fight but we have been grinding all season for a game like this. We were lucky enough to get away with this one.”

He is enjoying the chance to have one more tournament before the high school season winds down.

“It is amazing to have a tournament like this,” Benko said. “We lost last season because of COVID and we have been wanting this since Grade 9.”

Up next: Notre Dame advances to the BPSN junior championship game Friday at 6 p.m. at St. Catharines Collegiate. Donations to Ukraine will be accepted at the door.

The Centennial Cougars advanced to the junior consolation finals of the BPSN tournament with a 45-32 victory over the Denis Morris Reds Thursday at Denis Morris.

The Saint Paul Patriots advanced to the junior consolation finals with a 54-38 victory over the Blessed Trinity Thunder Thursday at Denis Morris.