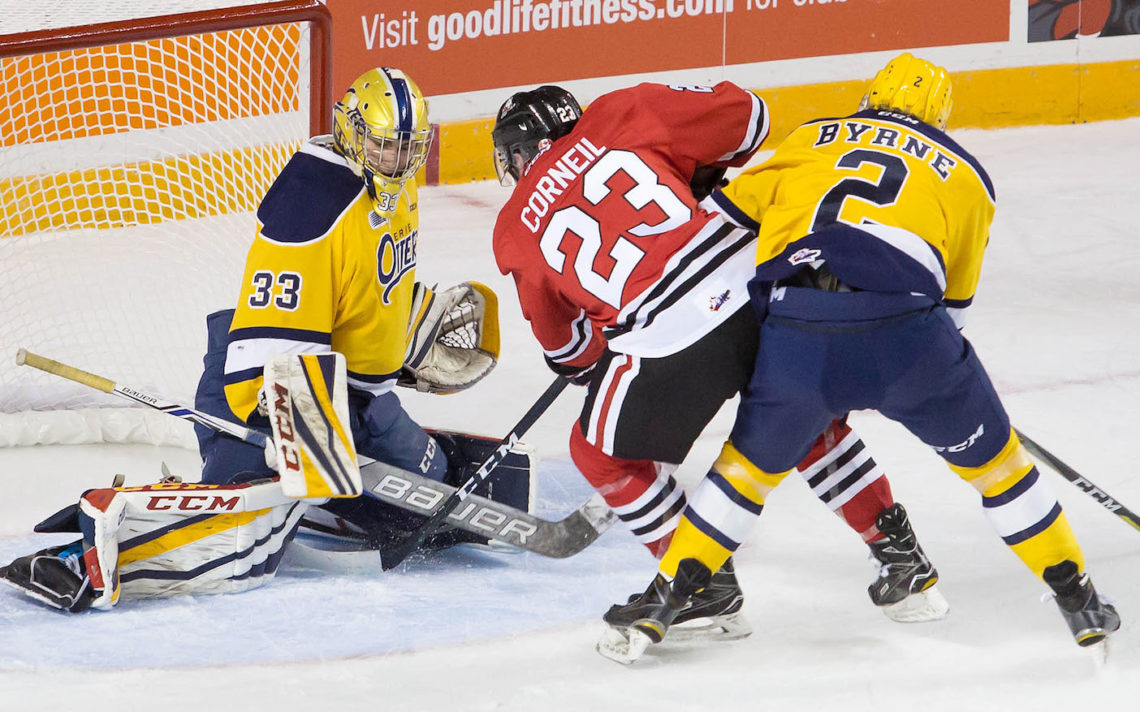 The Niagara IceDogs topped the Erie Otters 4-1 in their season home opener Friday at the Meridian Centre. PHOTO BY: COLIN DEWAR

The Niagara IceDogs have high hopes for Danial Singer this season.

After netting 13 goals and 27 points in an impressive rookie campaign, the St. Catharines native is being counted on to be an even bigger part of the offence this season.

Singer potted his first of the year as the IceDogs defeated the Erie Otters 4-1 in the Ontario Hockey League 2017/18 home opener Friday night before 4,768 fans at the Meridian Centre.

The IceDogs are now 2-0 after defeating Hamilton 4-1 in the season opener last week while the Otters fall to 1-2-1.

Niagara head coach Billy Burke has high praise for Singer, who began his junior career as a 16-year-old in junior B for the Fort Erie Meteors.

“He’s a natural goal scorer,” Burke said. “He’s one of those guys who his shot finds a way, finds holes. He’s nifty around the net.

Singer skated on a line with Matthew Philip and Ondrej Machala Friday and the unit looks to have already developed some chemistry.

At the other end of the ice, Stephen Dillon turned in another solid effort in net kicking out 25 shots while also picking up an assist.

“Stephen Dhillon was great last year, he’s better this year,” Burke said. “He’s very calm and collected. His rebound control has improved. There’s always going to be flurries in the OHL when you’ll be hemmed in a little bit.

“Stevie is doing a great job and I really like how we’re limiting shots to the outside. It’s a conscious effort of ours to end rushes at the blueline and I think that’s helped a bit.”

The teams played through a scoreless, conservative first period that saw Niagara hold a 8-5 lead in shots.

Burke chalked up some of the sloppiness early on to opening night jitters.

“We try to prepare the guys and tell them about the delays and whatnot and to be honest, I’m glad we had our first game on the road,” he said. “Home openers are tough for sure. They want to put on a show and score that first goal so badly.

“We were a little sloppy early but we weren’t cheating. We just weren’t executing well.”

It was more of the same in the second with little in the way of offence and a lot in the way of neutral zone play. Niagara generated a couple good chances off Erie turnovers but were unable to beat Otters’ netminder Troy Timpano until Singer scored off his own rebound with 3:15 to play. Just over a minute later Kyle Maksimovich tied the game with a quick shot from the slot.

Former Thorold Blackhawk Kyle Langdon gave the IceDogs a 2-1 lead early in the third with his first goal of the season. Akil Thomas added an insurance marker with seven minutes to play when he drifted a shot in from the point.

Oliver Castleman concluded the scoring with a power-play goal at the 14:51 mark.

The IceDogs did a solid job shorthanded killing off seven Erie chances with the man advantage, including a five-on-three in the second period.

“Usually five-on-threes are pretty automatic in this league so when you kill one it’s a big swing for us,” Burke said. “Penalty killing comes down to brains and bravery. Our guys were smart and blocking shots and sacrificing.”

Christian Girhiny (Thorold) and Carson Edwardson (Niagara Falls) were held off the scoresheet for Erie.

The defending champion Otters have lost over 200 goals from last season’s roster.

Ice cubes: Jukka Schotter, Joshua Dame, Ian Martin, Andrew Somerville, Drew Hunter and Ryan Smith did not dress for the IceDogs  . . . Stephane Patry, Joseph Mack, Jack Duff and former Niagara Falls Canuck Kurtis Henry were scratched for the Otters . . . Former St. Catharines Falcons coach and Niagara Falls native Wes Wolfe is back for his second season as an assistant coach with the Otters . . . Former junior B coach Rob Hubbert, who is battling health problems, was in attendance and looked strong.

For the Erie Otters: Kyle Maksimovich (2)