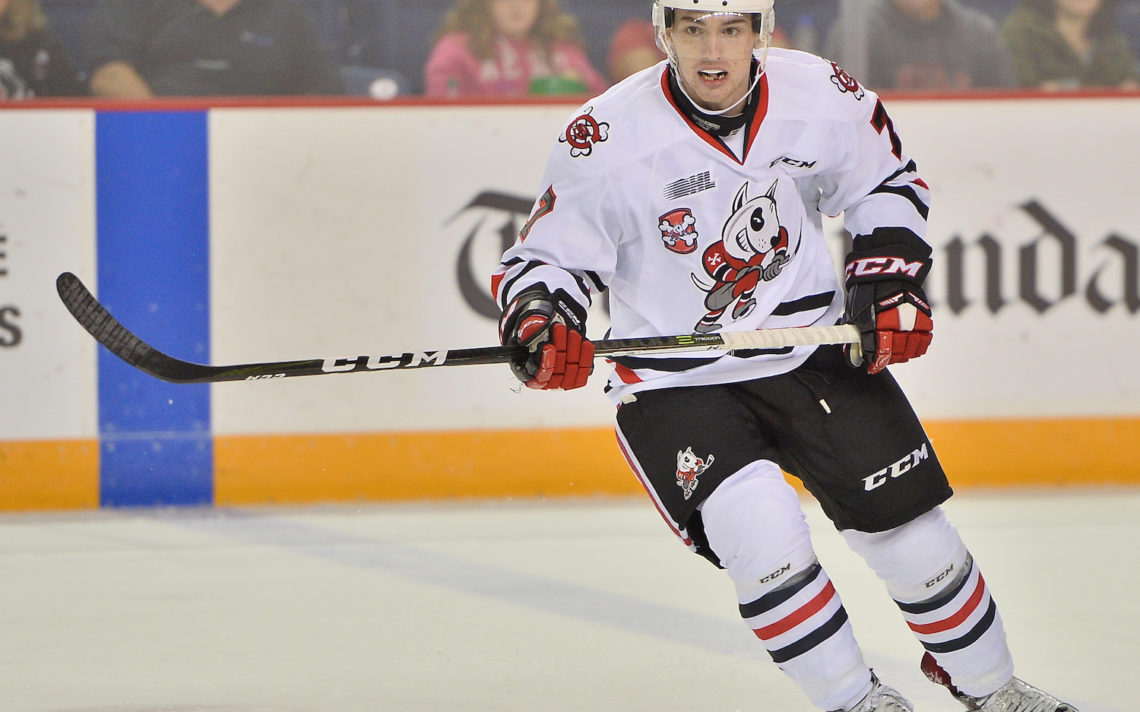 IceDogs make it three in a row

Kyle Langdon is off to a strong start for the Niagara IceDogs this season. PHOTO BY: TERRY WILSON/OHL IMAGES

Kyle Langdon would be an asset to the Niagara IceDogs even if he never scored a goal.

The 19-year-old Thorold native has always displayed a tireless work ethic as well as a willingness and ability to kill penalties and take care of things in his own end.

Any offence Langdon provides is a bonus and so far this season Langdon is more than holding his own in that department as well.

Langdon fired his second goal of the season and second in as many games as the IceDogs topped the Peterborough Petes 5-1 in an Ontario Hockey League game Saturday night at the Meridian Centre.

The IceDogs remain undefeated at 3-0 and are off to their best start in recent memory. The club only won three games in a row once last season.

IceDogs coach Billy Burke jumped at the chance to talk about Langdon.

“I can’t say enough about Langdon. You need guys like him,” Burke said. “We’re a much better team with him in the lineup. He can play up in the lineup with Akil (Thomas), it doesn’t matter. He chirps guys on the bench, he picks his spots.

“He’s awesome. He’s a throwback hockey player, a warrior. He’s the first guy over the boards for a penalty kill every time.”

Langdon has also impressed Burke with his improvement each year since beginning his junior career with the Thorold Blackhawks.

“His skill and his speed got better every year. He was a bubble guy for almost every year and all he does is grind and impress. He has nothing handed to him.”

Langdon is happy to chip in however he can.

“I’ve got a little bit of a different role this year with a lot of penalty killing but when I get my chances offensively I try and bury them and so far, so good.”

Langdon put up respectable numbers last season with 12 goals and 26 points and a plus-one in 60 games. He seems destined to top those marks this season if his early production is any measure.

“It’s definitely not a bad thing (to score). I think my line (Ryan Smith, Bradey Johnson) is more of an energy line and play in the other team’s end,” he said. “If we’re scoring, that’s just the cherry on top.”

Each team collected 10 shots on goal and a goal in the first period. Florida Panthers draft pick Jonathan And got the Petes on the board with an early goal before Thomas potted his second of the season at the 11:14 mark to tie things up.

Stephen Dillon came up with a couple of sharp saves on point-blank chances.

Niagara took a 2-1 lead early in the second on a power-play goal by Danial Singer.

Niagara then poured in three unanswered goals in the third period to cruise to victory.

Predicability, Burke was all smiles when asked about his club’s strong start.

“We knew tonight would be the toughest test with their group of forwards and the guys were ready,” Burke said. “I can’t say enough about them. They want to win more than they want to get points. I’m pretty proud of the guys and it’s special to watch them talk on the bench and motivate each other.”

The rookie coach has yet to taste defeat and admits it is a great way to get his career started.

“The guys have been great and have been buying into what we want to do and are all pulling in the same direction. No one is on their own page and it’s great.

“We have a skilled team that cares and that’s a really good combo.”

32 shots but didn’t get much support.

BPSN Star of the Game: IceDogs forward Kyle Langdon with a goal and solid contribution on the penalty kill.

For the Peterborough Petes: Jonathan Ang (3).

Up next: The IceDogs are in Peterborough Sunday at 2 p.m. Their next home game is Thursday versus the Sudbury Wolves.