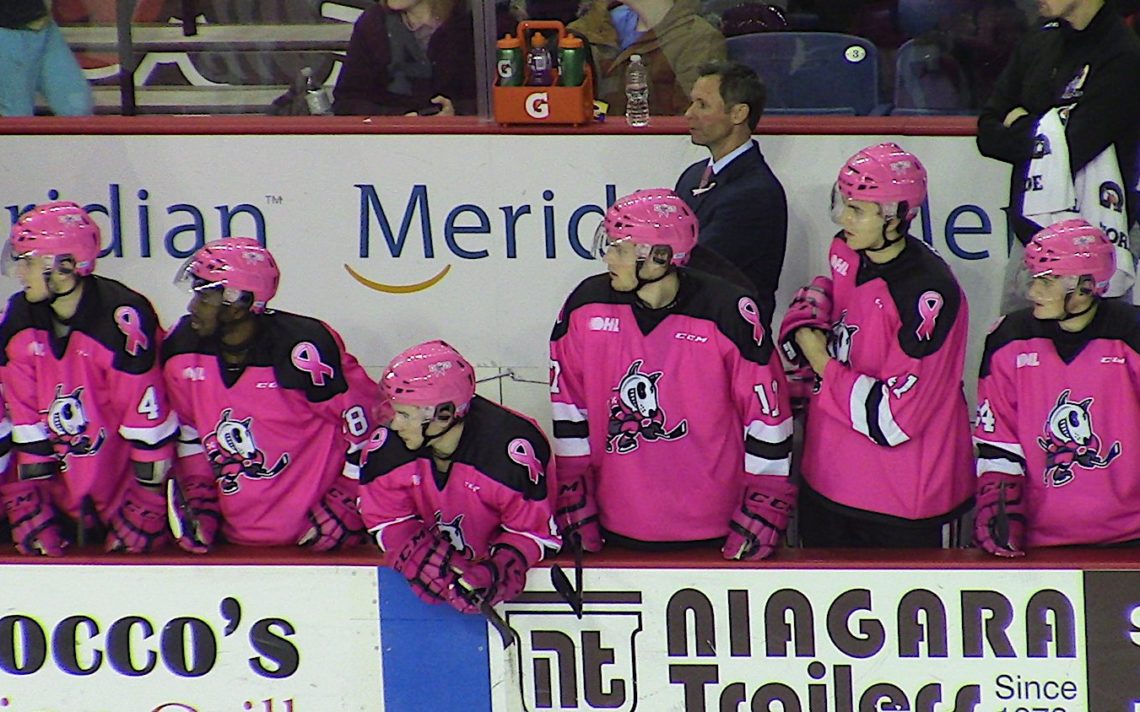 The Niagara IceDogs wore special pink jerseys which were auctioned off after the game with proceeds to the Canadian Cancer Society. Photo: Courtesy Niagara IceDogs.

Burke picked up the overage winger at the trade deadline and Miletic has been nothing short of unbelieveable.

Miletic potted three goals, including the winner in overtime, as the IceDogs rallied past the Sarnia Sting 6-5 in Ontario Hockey League action Friday at the Meridian Centre.

“He’s unreal,” Burke said. “It’s unbelievable to think we could get a guy like that for draft picks.”

Burke has been just as impressed with Miletic off the ice.

“He’s a true pro. He elevates everyone else. He doesn’t allow any sort of complacency.”

Miletic’s goal capped off an incredible and exciting comeback from a 5-1 deficit in the second period.

“They are the No. 4 team in the country and you give them an inch and they’ll make you pay,” Burke said. “We got caught a couple of times making some soft plays that won’t get it done against these guys.

“The biggest thing is to get it to two goals. Up or down two goals is huge and it’s really not a big lead at all.”

The IceDogs excelled on the power play scoring three times with the man advantage.

“We changed it up a bit and went with five forwards,” Burke said. “We got caught for a shorty but then the responded and scored.”

The Sting emerged from the first period with a 2-1 lead. The period featured a little of everything — goals, hits, nice plays and great saves from goalies Stephen Dhillon and Justin Fazio.

Sarnia then struck for three goals — two just 13 seconds apart — to build a 5-1 lead. The IceDogs rallied with a pair of goals in the final two minutes of the period to trail 5-3 after 40 minutes.

Niagara fed off the momentum of those two late goals to cut the deficit to one when Danial Singer scored an early power-play goal in the third. Captain Johnny Corneil completed the comeback when he scored his 13th of the season with two minutes to play and Dhillon on the bench for the extra attacker.

Matthew Philip rang a shot off the post early on  . . . Adrian Carbonara pounded Connor Schlichting with a great open-ice hit  . . . Elijah Roberts had a good chance off a feed from Akil Thomas . . . Carbonara ran into Sting goalie Justin Fazio behind the net and was assessed a minor for roughing . . . Niagara assistant coach Kris Sparre took a errant puck off the head behind the bench . . . Stephen Dhillon thwarted Jamieson Rees on a breakaway  . . . Both teams exhibited their fair share of chippiness as the period went on . . . Dhillon made a great save on Jamieson Rees to keep the score at 2-1 with two minutes to play and another on Drake Rymsha on the next shift . . . Shots were 17-16 Sarnia.

Roberts was stopped on a breakaway early on . . . Niagara pressed early for the equalizer . . . Kyle Langdon fired wide on a nice rush and then barrelled into the net  . . . Dineen’s power-play goal came with Danial Singer in the box for a hook at centre ice . . . The Sting fed off two goals in 13 seconds and held the margin of play for most of the remainder of the period until the final two minutes . . . Shots were 29-29 after two.

An early power play goal was exactly what the IceDogs needed to get back into the game . . . Three minutes later they were shutout with the man advantage . . .  Phillip Tomasino fired one high on a good chance halfway through . . . The Sting reverted to a much safer style of play as the period went on  . . . Maksimov nearly tied the game off a nice feed from Jones with about eight to play  . . . Seconds later Philip and Singer came even closer  . . . Maksimov had a clear-cut shot with 2:20 to play. . . . Shots were 50-35 Niagara.

Ice cubes: Daniel Nardi, Ian Martin, Andrew Bruder and Billy Constantinou did not dress for the IceDogs  . . . Brayden Guy, Ryan McGregor, Marko Jakovljevic and Alexandre Hogue were scratched for the Sting  . . . The Sting are coached by former NHL defenceman Derian Hatcher . . .  The Sting feature eight NHL draft picks . . . Niagara defenceman Willy Lochead was honoured as the Academic Player of the Month for December. Lochead maintains an 81 per cent average studying accounting and economics  . . . A moment of silence was held for long-time season ticket holder Bruce Roland . . . The entire IceDogs scouting staff was at the game. They are all in town for organizational meetings . . . Sarnia winger Drake Rymsha is the son of former St. Catharines Falcon Andy Rymsha . . .  Welland’s Curtis Egert was held off the scoresheet for the Sting.

BPSN Star of the Game: Niagara winger Sam Miletic with the hat trick.

Up next: At Sudbury Saturday and North Bay Sunday. 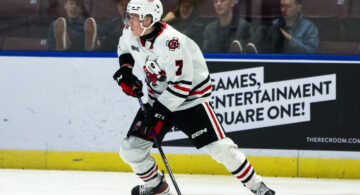