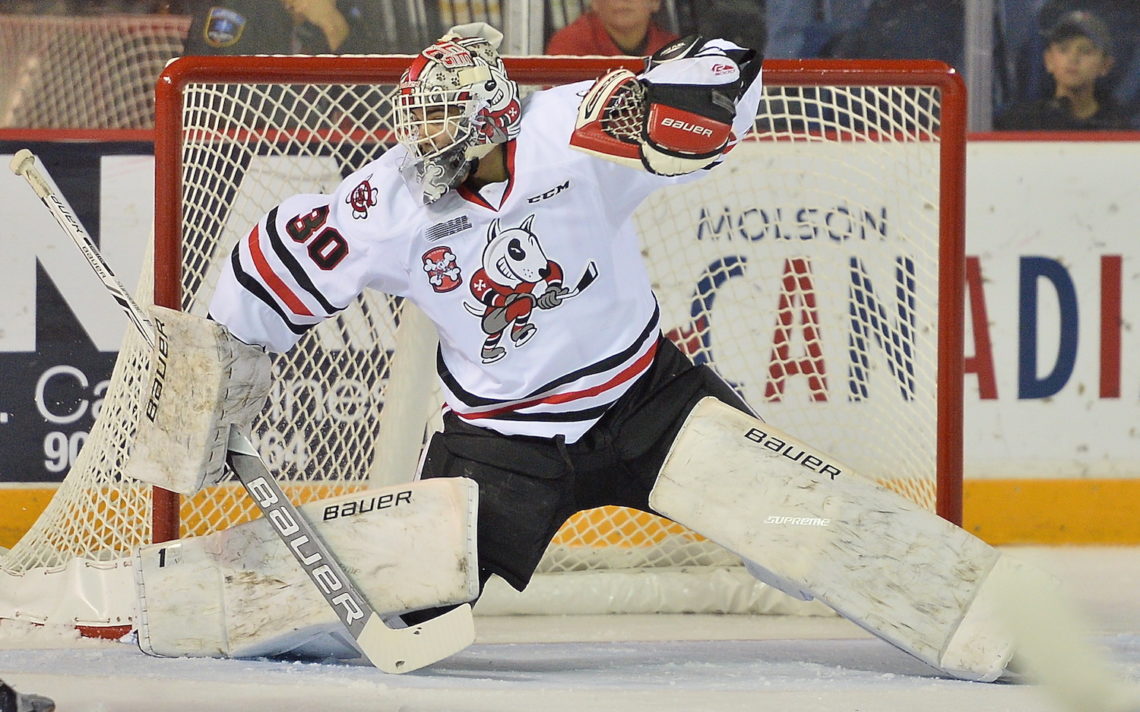 Stephen Dhillon didn’t get much help in his two periods of play as the Niagara IceDogs dropped a 5-2 decision to the Sudbury Wolves Thursday. PHOTO BY: TERRY WILSON/OHL IMAGES

If the Niagara IceDogs were golfing Thursday they would no doubt have asked for a mulligan.

Less than a minute into their game with the Sudbury Wolves, IceDogs found themselves down 1-0 and things only got worse from there.

The previously winless Wolves picked up their first victory of the season as they topped the lifeless IceDogs 5-2 in an Ontario Hockey League game played before 4,030 fans at the Meridian Centre.

Niagara has now dropped two in a row after beginning the season with three straight wins.

“We were very, very flat right from the start,” Burke said. “We tried to stress all week that Sudbury hadn’t won and they would be hungry and desperate and we can’t let them come in and outwork us and be more desperate than us and that’s exactly what they did.

“They scored in the first minute and that set the tone. It’s a hard league and you can lose every night if you don’t show up.”

The IceDogs still had a full 59 minutes to play following that goal, but things didn’t improve.

“Guys were cheating all over the place, wingers were blowing the zone before we even got the puck back,” Burke added. “We were lazy getting back.

“You can tell they thought it was point night. We had won three games so we can do whatever we want but we won those games for a reason and we definitely lost this one for a reason.”

Burke is hopeful his young squad can learn from this effort and turn the page.

“You hope you can turn around quickly,” he said. “I still believe in the guys 100 per cent. I’d bet my house we’ll come back with a better effort but you have to learn from it.”

The IceDogs looked especially sloppy in their own end, but Burke was quick to point out it was far from the fault of just the defencemen.

“It’s a five-man system and it doesn’t work if guys are cheating and leaving the zone early,” he said. “If there is a turnover we should have layers to protect the guys.”

Sudbury took a 2-1 lead after 20 minutes on a pair of goals sandwiched around a power-play marker by Ben Jones. The Wolves held a 10-8 edge in shots which was much more lopsided before a late flurry of offensive activity by the IceDogs.

Sudbury took control of the game in the second with three straight goals to lead 5-1 after two and chase Niagara starter Stephen Dhillon. Dhillon permitted five goals on 20 shots, although he received little in the way of protection. Colton Incze took over in the third and turned back all 10 shots he faced.

Rookie Andrew Bruder provided a lone bright spot in the third when he netted his first OHL goal.

Moments before, Kirill Maksimov’s frustration boiled over when he took a needless major penalty for slew footing and now will be gone for the next two games.

The IceDogs are in Oshawa Friday and Hamilton Saturday.

BPSN Star of the Game: Sudbury’s Michael Pazzetta with a goal and an assist.

Up next: Friday in Oshawa, Saturday in Hamilton.