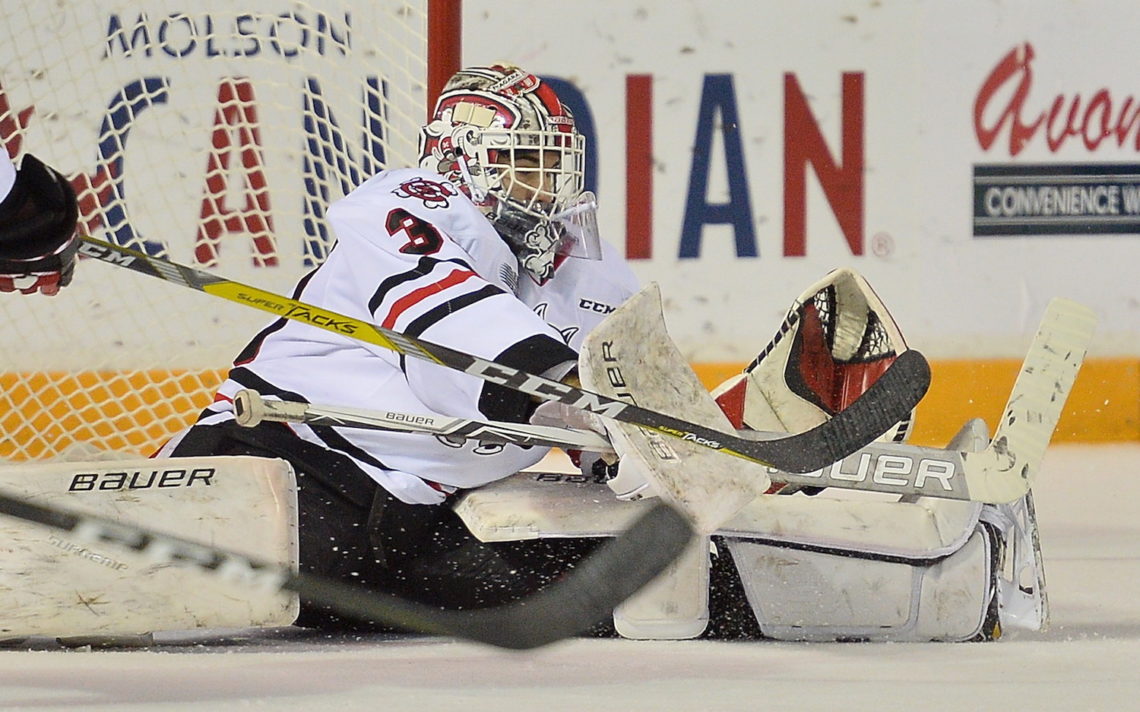 The 18-year-old winger has been on fire recently and Friday night continued to add to his offensive totals.

Maksimov fired his team-leading 14th of the season and also picked up an assist as the Niagara IceDogs topped the Ottawa 67’s 3-2 in an Ontario Hockey League game Friday night at the Meridian Centre.

Maksimov has scored in five straight games and has points in six in a row.

“I don’t even think about it,” Maksimov said. “I’m just trying to work well and play hard for the guys.”

Maksimov had a simple explanation for his recent success.

“My partners are helping me a lot and I’m using my shot pretty good, I think.”

“You need your big guys scoring and contributing and when he’s not scoring he’s still plays hard the right way,” said Burke, who found out this week he and wife Jamie are going to be parents. “He’s dangerous and he’s consistent in his effort.

“He does a lot of things the right way. He has pro potential and it’s great to see him contribute offensively.”

The IceDogs came in severely undermanned in the toughness department with Adrian Carbonara and Zach Shankar both on the sidelines with suspensions and gritty Kyle Langdon banged up and out of the lineup. Carbonara has now served two of his eight-game suspension for a check to the head while Shankar was handed five games on the sidelines, also for a head check.

“We talked about it. We had our three grittiest guys out so its tough,” Burke said. “We didn’t know what we’d get but guys stepped up to be hard to play against.

“That’s really what we focused on today, how we can create more and be a little harder on things and the guys did that. It started with our leaders, the guys who have been in the league for a couple of years. I thought they set the tone and everyone else followed.”

The IceDogs netted the lone goal of the first when Drew Hunter fired a wrist shot from the point for his second of the season just over three minutes into the period.

Late in the period, Niagara killed off a two-man advantage for 1:22 to be able to keep their 1-0 lead after 20 minutes. Ottawa held an 11-8 edge in shots.

Maksimov scored an early power-play goal in the second to add to Niagara’s lead for the only goal of the period. Ottawa held a 24-20 edge in shots after 40 minutes.

Rookie Philip Tomasino gave Niagara some breathing room when he netted his third of the season on a breakaway early in the third.

That goal would come in handy as the 67’s made it 3-1 on a goal by Mathieu Foget with just over five minutes to play.

Ottawa then closed to within one at 3-2 when Graeme Clark scored with 2:13 remaining.

Stephen Dhillon had a solid game in goal for Niagara with 29 saves.

Ice cubes: Carbonara, Shankar, Langdon and Joshua Dame were scratched for the IceDogs . . . Cedrik Andree, Nolan Gardiner and Kody Clark didn’t dress for the 67’s . . .  Dave Gorman, Diane Hilko, Mark Johnston, Tim Twaddle and the late Hank Ciesla were honoured prior to the game for their induction into the St. Catharines Sports Hall of Fame this week. . . . Academic player of month for November Phil Tomasino was honoured before the game . . .

Up next: Home to Mississauga Saturday at 7 p.m. The Erie Otters visit next Thursday.