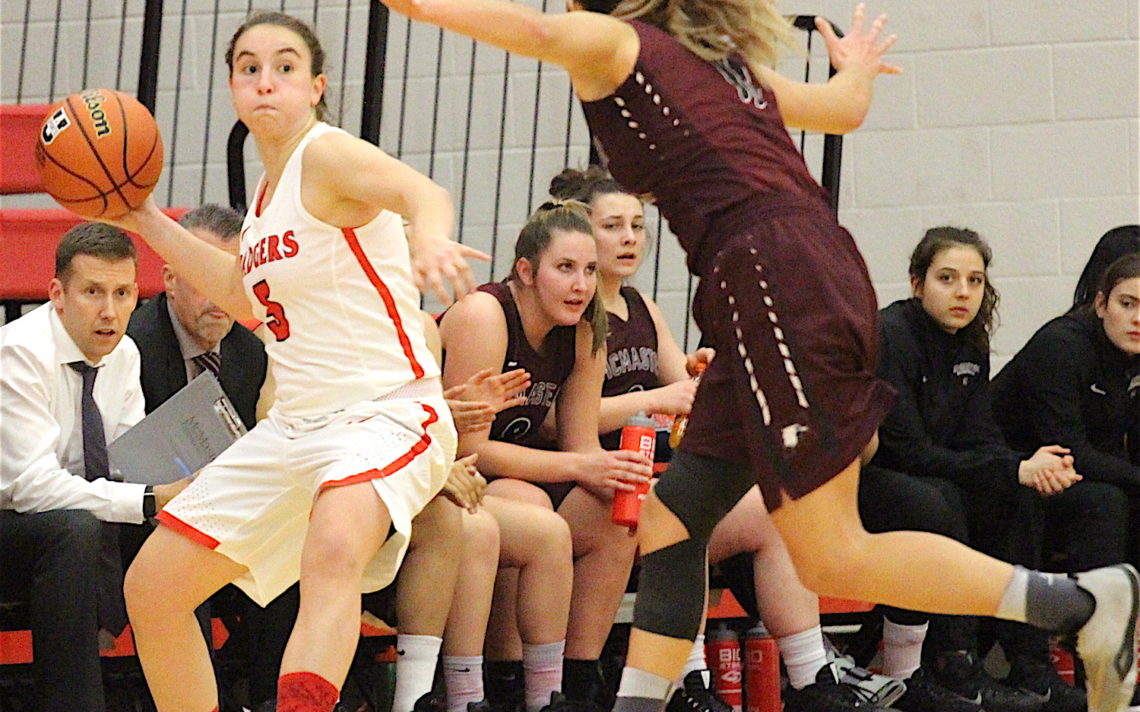 “England was going through the Brexit process, Australia was really far away and the United was suffering with Trump and Hillary,” said the 19-year-old native of Lisbon, Portugal. “It was OK. I could go to Canada and learn English and my dad’s company (CGI) had some projects here.”

She applied to Laurentian, Ryerson and Brock before ultimately choosing the St. Catharines university.

“Laurentian is really far up north and woo, woo,” she said. “In Portugal, our winters are 20.”

Ryerson’s coaching staff said they would love to have her but she never heard from the school and Brock quickly became her only choice.

“Brock was the only one that answered me,” the economics major said Friday, after scoring 16 points in a 70-61 loss to the visiting McMaster Marauders.

She didn’t know what to expect when she came to Canada but has enjoyed the experience.

Coming from a big city like Lisbon, she thought she would be more comfortable in Toronto but St. Catharines suits her just fine.

“It’s a different lifestyle and it’s better for me to make my first steps here,” the 5-foot-7 guard said. “It’s not so busy like the city.”

Caldeira Rua didn’t get much playing time her first year at Brock. She suffered a concussion that cost her the first two months of her rookie season and she was competing for minutes behind the talented twosome of the Bridget Atkinson and Melissa Tatti.

“The concussion kind of dictated the rest of the season,” she said. “I was new, I was a rookie and Canadian basketball was a lot different than European basketball.”

All her teammates were so much stronger than her and she found it hard to play.

“Canadian basketball is all about contact and being strong and I didn’t grow up in that environment.”

Caldeira Rua has loved the transition to being a starting guard on the team. Going into the McMaster game, she was averaging 25.9 minutes, 3.3 rebounds, 4.1 assists and 6.9 points a game.

“Every basketball player wants to be a starter and play all the time but I don’t care about being a starter,” she said. “I just want to play.

“Do whatever you want. Just play me.”

She feels the biggest stride she has taken this year is being more confident with the ball.

“Not playing much, it was hard to get confident,” she said. “I would play two minutes and I would be shaking all over.”

She also worked hard in the weight room over the summer to be able to play a more physical brand of basketball.

“We basically worked our butts off,” she said.

One area she knows she needs to work on is reducing the number of turnovers she commits.

“I know, I know,” she said. “I try to do the difficult pass every time and my coach is always telling me to do the simple stuff.”

“I like the European style of basketball of doing some dimes (assists) but I have to chill a little bit and do the right thing at the right moment.”

“Some people would pull their hair out and not be OK with what she does and then she goes and does something fantastic. I am just trying to get her to calm down and understand when to do certain things,” she said. “She chucks the ball away when she doesn’t need to and she can keep attacking because she needs to be more selfish sometimes.”

Brock did way too much chucking the ball away Friday versus McMaster.

MacSporran thought her team followed its game plan quite well except for a couple of lapses in the third and fourth quarters.

“Mac was really strong on the three and we wanted to defend the three better,” she said. “Because of how young we are, we practised things all week but once it was in-game we are still learning how to do that.”

She felt her team showed once again it’s hard to defend when it gets out and run.

“We competed with No. 9 tonight,” she said. “We’re there but we just have to be more consistent.”

Welland Notre Dame grad Miranda Smith made her regular-season debut for the Badgers and had a rebound and three assists in 14 minutes of playing time.

“I just wanted to get her some minutes so next weekend she’s feeling more comfortable,” MacSporran said. “Miranda’s length helps us a lot defensively, she has good speed and people have to come out and guard her.”

Smith is recovering from a broken left hand.

“We are looking forward to next weekend and going into the new year with her being healthy,” MacSporran said.

BPSN Star of the Game: McMaster’s Sarah Gates with 17 points and 12 rebounds.