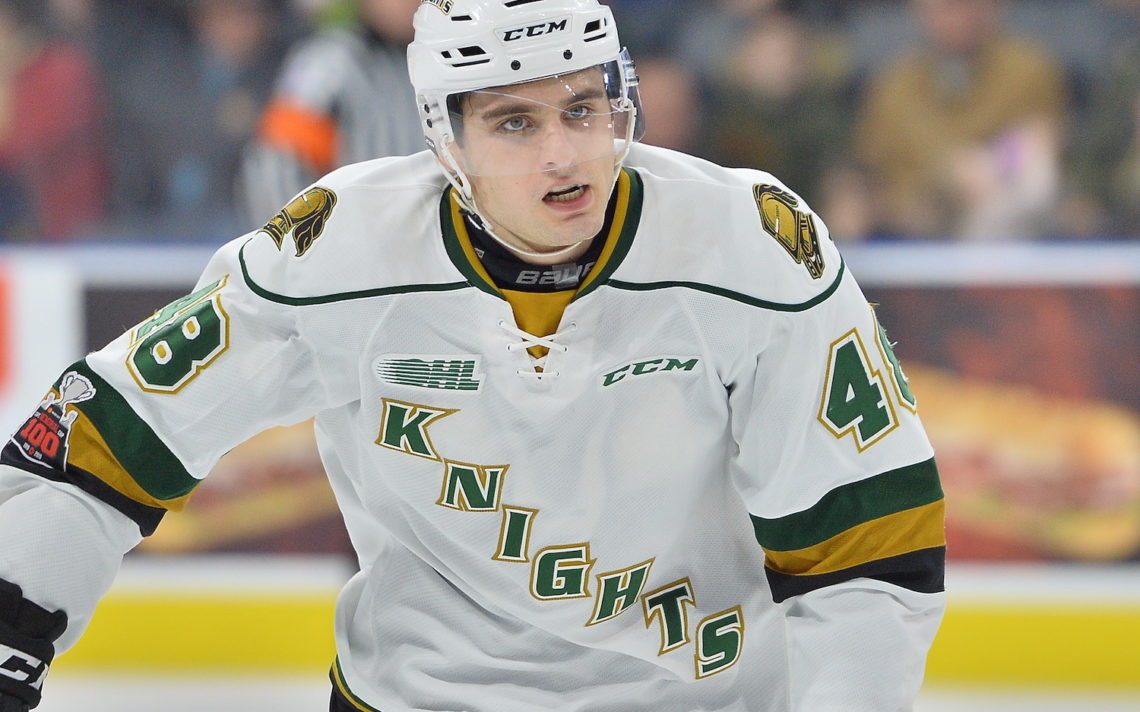 IceDogs get their man Sam

The Niagara IceDogs picked up forward Sam Miletic from the London Knights. PHOTO BY: OHL IMAGES

The Niagara IceDogs dealt some of their distant future for a proven offensive producer at the Ontario Hockey League’s overage deadline Tuesday.

The IceDogs landed forward Sam Miletic from the London Knights, along with Sudbury’s third-round pick in 2018, for second-round selections in 2018, 2024 and 2025. Niagara also sends a third-round pick to London in 2022.

“The price when you look at it with three seconds and a third may seem steep, but the way we look at it, two of the seconds are seven and eight years down the road,” Niagara general manager Joey Burke said. “We wanted to make our team as strong as we possibly could this year without affecting our ability to make a big splash and a big run next year and I think we’ve been able to do that very effectively.”

Burke said even with the deal, the IceDogs are well stocked with draft selections.

“At the next six drafts, all we’ve lost is one third-round pick (2022) and we had two third-round picks that year anyway. We’ve been able to set ourselves up very strongly without jeopardizing anything for the future at all.”

Miletic was signed to an entry-level contract by the Pittsburgh Penguins in September prior to being sent back to the OHL. Miletic has amassed 16 goals and 54 points in 35 games this season and over his past 100 games has 53 goals and 56 assists, including 37 goals last year.

“You bring in a top-five scorer in the league, an elite offensive talent,” Burke said. “With us being in striking distance of our division lead, it was a message that was needed to be sent from my end.

“It hasn’t gone unnoticed what they (coaching staff) has been able to do with our group and this a little bit of a reward for them and for the players.”

Miletic, a 20-year-old native of Michigan, is thrilled to be joining the IceDogs.

“I’m thankful for everything London has done for me but with that being said I’m really excited to come to Niagara,” he said. “It’s a great city and a great organization. The IceDogs are always a tough team to play against so I’m excited to be joining them.

“I’m excited for a new start and an opportunity with such a great organization. I can’t wait to make a playoff run with these guys.”

Miletic, who is listed at six feet, 196 pounds, was shocked at the deal, despite the fact the Knights have been in sell mode.

“I didn’t see it coming at all. I found out right at the deadline today when the London GM gave me a call.”

Burke feels the acquisition of Miletic will help the IceDogs they battle for the Central Division title — Niagara trails Barrie by just two points for first place with a game in hand —as well as in the post-season.

“The coaches and myself identified a high-end elite offensive player to go out and play with Akil Thomas,” Burke said. “We have a guy who Akil can play with now and really make some noise.

“I think it makes us a deeper, stronger team because of the move.”

“It’s all smiles in here. Joey did his job, now we have to continue to do our jobs.”

The trade deadline for non-overage players is Wednesday at noon.

“Barring something unforeseen coming, we’re most likely going to hold pat from this point on and then address everything else in the off-season going into next year,” Joey Burke said.