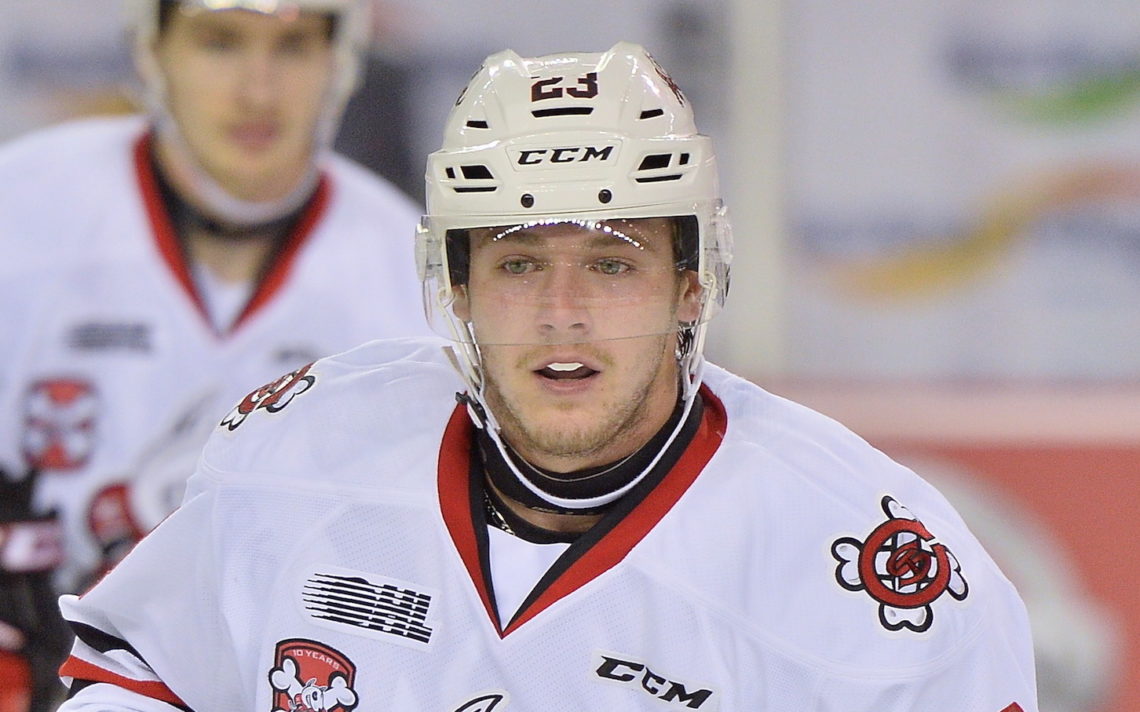 Captain Johnny Corneil played his final junior game Thursday as the Niagara IceDogs were eliminated by the Hamilton Bulldogs. Photo by: OHL IMAGES

The Niagara IceDogs came up just short in an effort to extend their season.

The IceDogs dropped a 4-2 decision to the Hamilton Bulldogs Thursday night at the FirstOntario Centre in Hamilton, but not before a dramatic late-game rally.

The Bulldogs took the Ontario Hockey League best-of-seven Eastern Conference semifinal playoff series 4-1 and advance to the conference finals versus the winner of the Barrie-Kingston series.

Trailing 3-0 with about eight minutes to play, the IceDogs came to life with goals by Johnny Corneil and Ben Jones, the latter coming with 2:26 to play and goaltender Stephen Dhillon on the bench.

The IceDogs then pushed hard for the equalizer before the Bulldogs scored into an empty net with less than a minute to play.

Hamilton netted the lone goal of the first period when St. Louis Blues draft pick Robert Thomas fired one through the legs of Niagara netminder Stephen Dhillon. It was Thomas’ first even-strength goal of the series. Hamilton held an 11-5 edge in shots in the period.

Niagara turned up the heat in the second period and outshot Hamilton 15-9, but could not beat Kaden Fulcher. Both Akil Thomas and Elijah Roberts had point-blank chances to score.

At the other end of the rink, Will Bitten was thwarted on a breakaway for the Bulldogs.

Matthew Strome and Nicolas Caamano scored for Hamilton in the third to give them the 3-0 lead.

The underdog IceDogs gave the Bulldogs all they could handle in the series with the first three heading to overtime. Game 4 was a 4-2 win for Hamilton with the fourth goal coming into an empty net at 19:59.

The loss ends a successful season for Niagara which finished second in the Central Division and fourth overall in the conference with a 35-23-4-3 record before disposing of the Oshawa Generals in the first round of the playoffs in five games.

The loss marked the end of the junior careers of overagers Corneil, Sam Miletic and Adrian Carbonara.