Putting all his eggs in one basket seems to have paid off for Robbie Stewart.

The 16-year-old, Grade 10 student at Governor Simcoe was always a standout baseball and hockey player growing up in St. Catharines, but two years ago made the decision to give up baseball and concentrate full time on hockey.

Stewart’s focus paid off last week when he was selected by the Sudbury Wolves in the 12th round of the Ontario Hockey League draft.

“Summers were busy playing baseball and hockey and to develop as a hockey player, I had to put my time into hockey training and working out,” Stewart said. “It was a choice I had make and it looks like it’s working out pretty well right now.”

Stewart, a 6-foot-3, 174 pound rearguard, was thrilled to be selected by the Wolves, a team in a rebuilding mode.

“It was pretty special. It was a long-awaited day and overall I was happy with the result. It was a pretty good day in the end,” he said. “In the short term at least, it was a good reward and long term I just have to keep working hard to get to the next level.”

Stewart was with his family most of draft day but at a friend’s house when he finally saw his name on the screen. 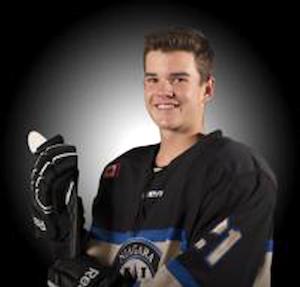 “I celebrated there and that was a good time as well.”

Stewart, who will attend a rookie orientation camp this weekend in Sudbury which involves both on and off ice components, collected four goals and 13 points in 32 games for the Niagara North Stars this season.

“Like any season, it had ups and downs but I think as a player I developed,” he said. “The coaches were great and helped me a lot. Overall, it was a good season.”

“It was great. He helped us out a lot on the ice and even in the room if we had any questions about that,” he said. “He was pushing us as hard as he could and that helped us as a team and individually as well.”

Stewart plans to focus on using his big frame more now that he is playing at a higher level.

“Overall, I think I need to improve everywhere. If there is one area to improve on,  I’m a big body so just being more physical and growing that part of my game,” he said.

Stewart practised with the St. Catharines Falcons at times this season which gave him an idea what he would be in store for in junior.

“Going against bigger guys made me feel strong on my feet and push hard and really get my strength and game going,” he said. “It really helped me in games going against guys my age again.”

“Ultimately, I’m going to Sudbury to battle for a spot and see what happens.”

The 15-year-old, Grade 10 student at St. Francis was hoping to be selected in the OHL draft and to wait to almost the end to see his name chosen.

The 5-foot-8, 152-pound forward was selected by the Hamilton Bulldogs in the 15th and final round with the 298th overall selection. Only two more players were selected following Costantini. 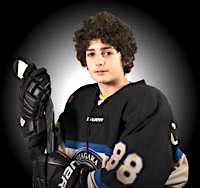 “I wasn’t really too worried. I was wondering when obviously and just trying to stay positive,” he said. “I eventually thought I would see my name.

“It was a waiting game.”

When he finally did see his name, there were hugs all around the Costantini household.

“It was awesome. It was very exciting for me and my family. It was an awesome accomplishment,” he said.

Costantini collected 12 goals and 29 points in 34 games for the Niagara North Stars.

“I thought I had a good start and kept progressing and had an even stronger second half of the season,” he said. “I’m a playmaker and goal scorer who can make big plays and score big goals.”

Costantini, who played AAA all the way up through minor hockey, has some specific ideas on how he can improve his game.

“The biggest thing is the physical part of my game. If can get better at that it will bring my game up to the next level,” he said.

Costantini got a quick taste of life in the OHL when he was brought to Hamilton and given the royal treatment including watching a playoff  game versus the Niagara IceDogs from a catered box. He was also given a team golf shirt and some gear.

He also had a chance to watch the Bulldogs in his hometown earlier this week at the Meridian Centre.

“It’s awesome. It’s a really good feeling. There are people who are coming up to me congratulating me.

“It’s such a good feeling.”