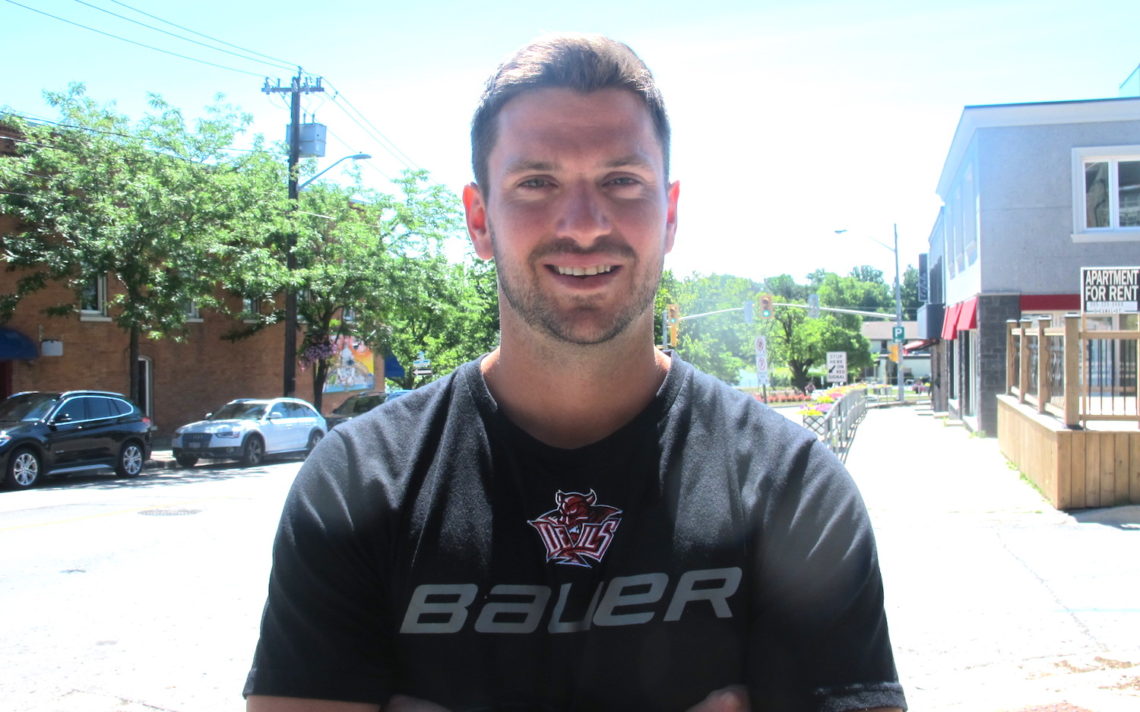 Joey Martin’s experience playing professional hockey across the pond has been nothing but positive.

The 29-year-old Thorold native has played the last four years for the Cardiff Devils of the British Elite Ice Hockey League where he led the team in scoring last season and has won a pair of league championships.

Martin joined Cardiff after bouncing around the American Hockey League and ECHL for a few years following his graduation from the University of Nebraska-Omaha in 2011.

“I kind of realized I wasn’t going to get an American League contract and if I did, it maybe wasn’t solid and maybe I was going to get sent down,” said Martin, who is spending a month in St. Catharines with his wife, Megan. “I was tired of that grind. I wanted to go experience something overseas.”

Martin said everything worked out, on and off the ice.

His wife was able to transfer her job to Cardiff, and the club treated him well, giving him an apartment and car and also paying for him to obtain his Masters of Business Administration.

It was an arrangement he couldn’t refuse.

“We went to try it out for one year and now we’re going back for five,” he said. “Everything lined up perfectly. It was hard to pass up. It was kind of a no-brainer.”

The Elite Ice Hockey League consists of 12 teams with representation from all four nations of the United Kingdom – the only league in any sport to do so. In 14 completed seasons, the league has been won by five different teams.

“I’d say overseas it’s the most similar league to North America,” Martin said. “I hear it’s a little more physical than the other (European Leagues). We still have a role for the fighters.

“It’s English speaking so a lot of it is very similar and with the Olympic ice it’s more of a possession game.”

Martin said travel is very tolerable with road trips of no more than four hours by bus. For longer trips, the team travels by plane.

He has seen a big increase in fan interest in his time there.

“It has a niche fan base. Obviously, it’s a rare sport there, but the people that love it are like passionate soccer fans. They come on away trips. It’s definitely growing a lot. Since my first year there, it’s grown substantially.”

“I describe it as an American college rink. It’s a bowl. It’s packed and they are on top of you.

“The fans are crazy. They chant, the sing, they’re loud. They bring drums and all have jerseys. It’s big to wear the team colours. It’s amazing. They are very passionate.”

The Devils are owned by a Calgary-based ownership group while the general manager (Todd Kelman) and coach (Andrew Lord) are also Canadians. The club had 12 Canadians on their roster last season, including Martin and fellow former Thorold Blackhawk Sean Bentivoglio.

Martin has noticed how much the level of play has increased in his four years.

“My first year the top two lines were good. Now, our coach is looking for a minimum AHL experience,” he said. “It kind of gets regarded as a league where you go at the end of your career to do your school. Guys are coming there and doing their Masters and love it and stay.”

“I definitely feel like I’m in the prime of my career. I feel healthy so I think I want to play as long as I can,” he said. “It makes sense. My wife is happy, which is the biggest thing.

“Maybe in a few years I might explore other leagues but for now I’ll take it year by year.”

“It was a great time. I grew up watching the Thorold Blackhawks and my brother playing there and then I got to experience playing for the Blackhawks. Winning a championship in my hometown was so special,” he said. “At that time, I didn’t think it could get much better.

“It’s obviously one of my favourite memories in hockey and then as my career went on, I kept surprising myself.”

Martin feels Timmins’ style of play helped him as he progressed through his career.

“I think all the lessons I learned from playing in Thorold I’ve taken with me,” he said. “I think one of the reasons I have success now is Dan Timmins. He instilled a defensive game. He wanted his players to be defensive and to incorporate that into my game has attributed a lot to my success now.”