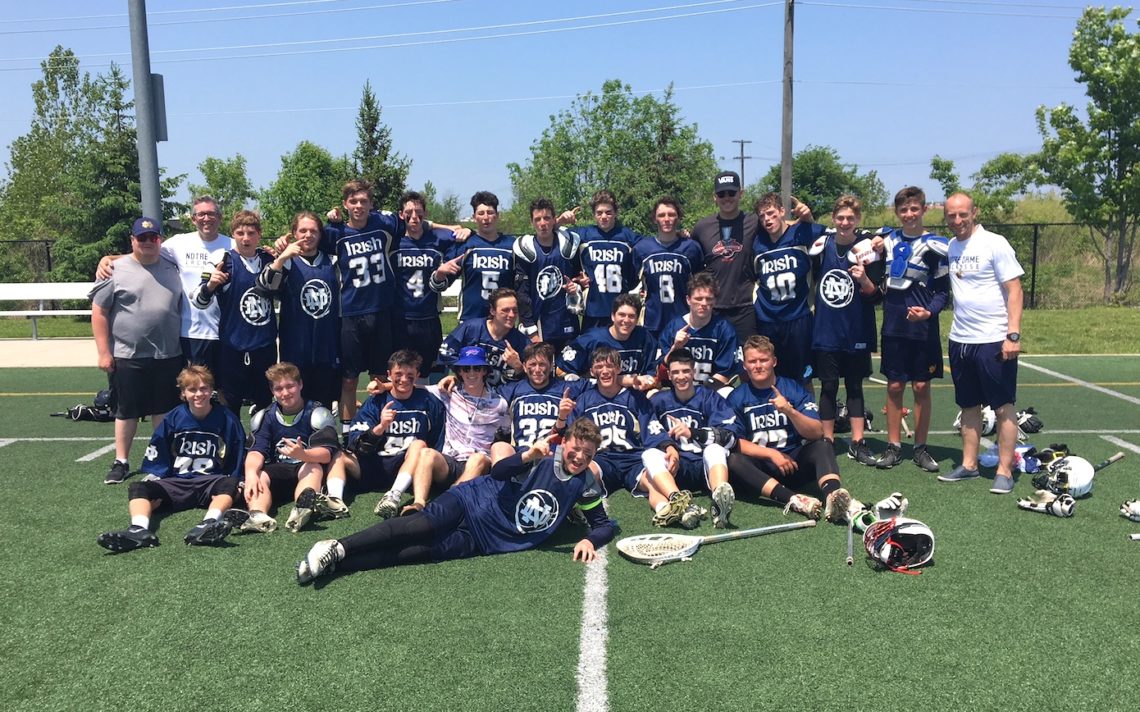 For what is believed to be the first time in the history of the Welland school, the Fighting Irish have qualified for OFSAA (Ontario Federation of School Athletic Associations) in field lacrosse by knocking off the Denis Morris Reds 8-6 at the Southern Ontario Secondary Schools Association boys AAA championship at Kiwanis Field.

Thoms scored the winner with just under three minutes to play to break a 6-6 deadlock. The Irish added an insurance goal about a minute later.

When the final whistle sounded the Irish poured on to the field before shaking hands with the Reds and then finally posing for the traditional team photo following a championship.

“We’re the underdogs. We’re not supposed to win this,” said Thoms, a 17-year-old, Grade 12 student. “It’s usually DM so we played like we had nothing to lose.”

Thoms admitted beating the Reds made it that much more special.

“I think it was four years of fury of losing this game (SOSSA final) because we’ve lost this game maybe even more than four years in a row. It all built up and it just poured out today,” he said. “It was running through our minds. We wanted revenge bad and we got it.”

“It was a long time coming,” he said. “I think this is the first time going since I was back in high school and it was a different format.

The evenly matched game was tied 2-2 after one quarter before DM took a 4-3 lead into halftime.

The Fighting Irish took control in the third quarter scoring all three goals to take 6-4 lead into the final 12 minutes. DM rallied with a pair of early goals to tie the game at 6-6 before Thoms and Sam LeClair scored.

“I told them we had four keys to the game,” Hominuck said. “One was being on a even keel, another was discipline, and the others were being patient and intense and we did all of those things.”

Hominuck was particularly proud how his club kept their composure once the Reds tied the game.

“They came back and you focus on the prize,” he said. “You remember the even keel and to keep on going.”

“We had good opportunities and had the ball in the right guy’s stick. Their goalie makes a save and we don’t get the rebound and it ends up being a fast break and they score,” he said. “I think it came down to before those opportunities when we let them back in the game. You can’t throw the ball away and be successful.”

Thoms, LeClair and Mason Ash each had two goals while Nick Villella added a single. Another goal was credited to No. 44. Notre Dame’s roster did not have a 44.

Peyton McIntosh was a one-man show for DM scoring all six of their goals.