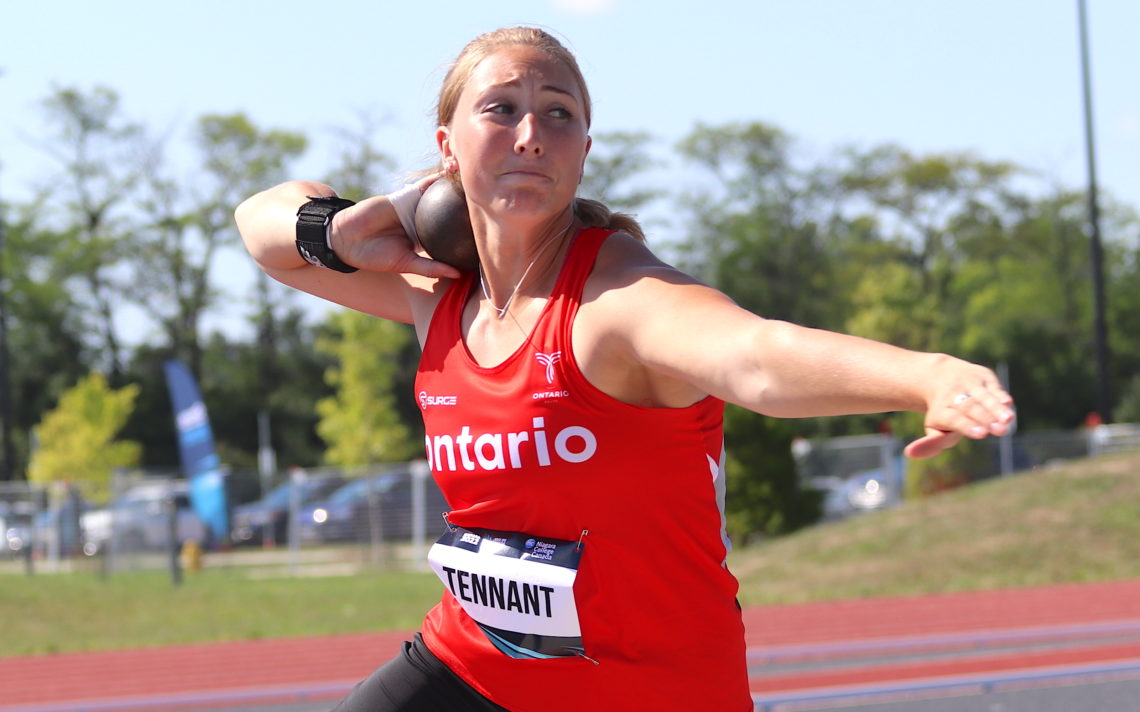 On a stifling hot Friday morning at Canada Games Park, Grace Tennant put an exclamation mark on a worst to first storyline.

The former NCAA Division 1 scholarship athlete at Kent State had the three longest throws at the event,  all of them in the final three throws of the medal round.

She threw 15.42 metres, 15.77 metres and won the event in convincing fashion with a final throw of 16 metres. British Columbia’s Tasha Willing took the silver medal with a throw of 15.06 metres.

“It is quite the turnaround from five years ago,” the South Lincoln graduate said. “It feels good to win the Games, especially this close to home. That was the goal coming into it.”

But like all great athletes, Tennant wasn’t completely satisfied.

“Obviously I wanted to throw a bit further than I did today. I was really chasing that record by Julie from 2009,” the South Lincoln graduate said.

“I came just shy but I am still proud of what I did today.”

The third-place finisher at this year’s Canadian senior championships woke up Friday morning ready to rock and roll.

“It was just like any other competition. I had to make sure my breakfast was the same, get my music going, get excited for the day and make sure I was coming in prepared.”

Her Canada Games showing in 2017 was not far from her thoughts.

“I did think of it a few times while I was throwing. My 2017 self would be pretty happy with how I threw today,” she said. “I think I did the job but I wish I would have thrown a bit farther.”

Tennant got to throw in from of at least one familiar face. Morna Ahlstedt, her former elementary school teacher and the wife of her former coach, John Ahlstedt, was inputting the results and nervously watching ‘my girl’.

“It has been awhile since I had Morna sitting beside a (shot put) circle so it was kind of nice to see a familiar face.”

Before the three medals throws, Tennant walked over and talked to her coach Richard Parkinson and Team Ontario throws coach Ron Cuffy. The gist of the conversation was obvious.

“I was telling them I wanted to throw father and how were we going to get there.”

She was also doing some exercises between throws.

“I kind of do some drills to keep my energy up so that I am ready for the next throws.

Tennant didn’t have much time to savour her victory with the preliminary round in the discus set for 4:45 p.m. Friday.