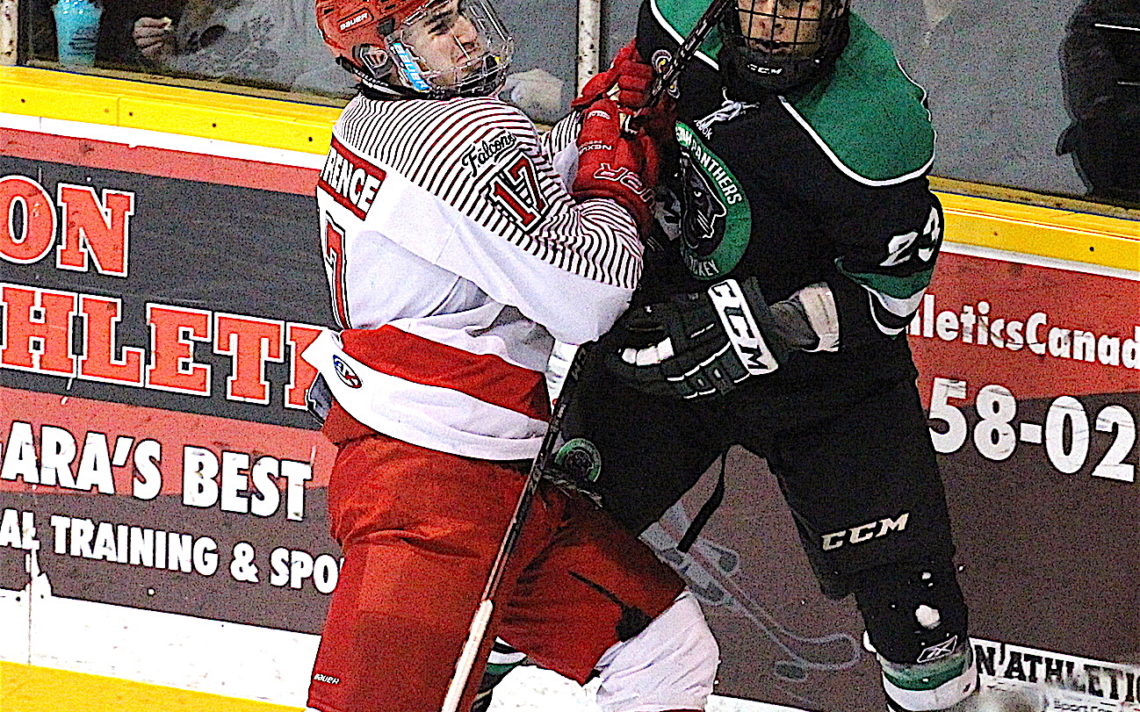 The Pelham Panthers had no answer for Michael Davies or Lucas Smilsky Friday night.

“We came out and had four lines going,” Davies said. “The biggest thing in playoffs is momentum and character and I think we showed that. We came out and scored a couple of goals early and kept our foot on the pedal and consistently got better as the game went on.”

Davies admitted it was rewarding to have such a memorable individual effort in the post-season.

“Our line (with Kyle West) was going tonight,” Davies said. “We found some early success on the power play and sort of just rolled with that momentum the rest of the game.”

“They looked like why they’re the best line in the league,” Girhiny said. “They (best players) have to be our best players, 100 per cent and the guys who aren’t have to play within themselves and have to be smart.”

Girhiny felt the effort was exactly what the Falcons needs to make a statement to start the series.

“Very, very pleased with our effort. That was Falcon hockey,” he said. “We made some adjustments and worked it.

“All the way around, we got a great effort from all 20 guys.”

St. Catharines jumped to a 2-0 lead thanks to a strong opening period that saw them outshoot the Panthers 13-7 and score a pair of power-play goals.

Jared Hill got the Panthers on the board early in the second before the Falcons rebounded with a pair to lead 4-1 after 40 minutes.

St. Catharines followed that up with a dominant third period.

Davies said it’s vital the Falcons follow up the effort with another strong game Sunday.

“We got the jitters out tonight,” he said. “I thought a bunch of guys stepped up in a good way.

“The first one is always a big one in the series, especially being the team that is projected to win the series. It’s important to come out and have a hot night and show teams we are the real deal and not just playing around.”

Falcon facts: Dakota Miskolczi, Tanner Main, Arber Xhekaj and Jack Venneri did not dress for the Falcons  . . . Tyler Kennedy and Dante Tessoro were scratched for the Panthers  . . . Former NHL forward and Thorold Blackhawk Zenon Konopka was in attendance.

The Niagara Falls Canucks took a 1-0 lead in their series with the Thorold Blackhawks with a dominating win Friday night at the Gale Centre.

Trevor Neuman replied for the Hawks.

Game 2 is Saturday night at Thorold.

The Caledonia Corvairs took a commanding 3-0 lead in their series Friday night at home.

Alex McAteer replied for the Meteors.

The Corvairs can wrap up the series Saturday in Fort Erie.

For the Pelham Panthers: Jared Hill. 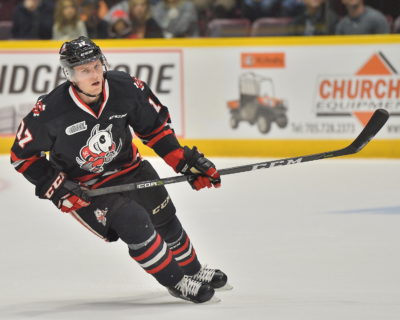 The Niagara IceDogs continued their struggles against the Barrie Colts.

The IceDogs fell to 1-5 versus Barrie as they dropped a 7-2 decision in Ontario Hockey League action Friday night at the Meridian Centre.

The game was tied 1-1 after one before the Colts took charge in the second with three straight goals.

Stephen Dhillon permitted all seven goals on 32 shots and took the loss in net for the IceDogs.

The IceDogs, 28-23-7-3, play host to the Peterborough Petes Sunday at 2 p.m. They trail the Oshawa Generals by one point for fourth place in the Eastern Conference.