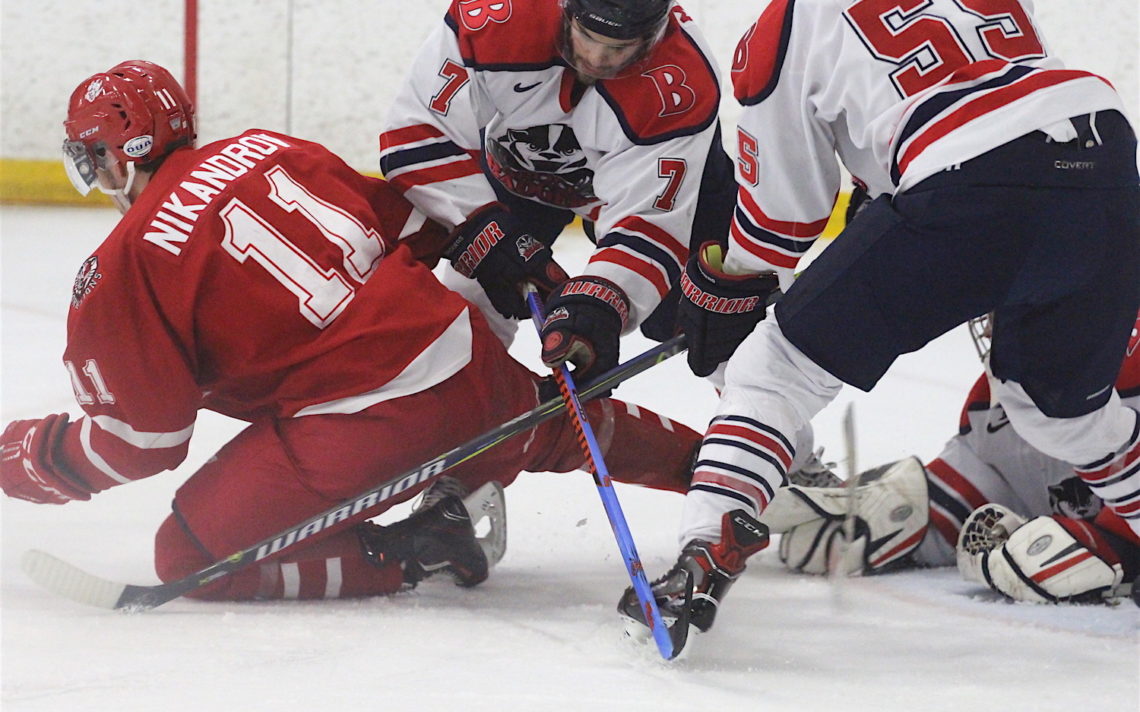 Lions even series with Badgers

With a 3-1 lead and a goalie sporting a playoff goals against average of 1.92 and a save percentage of .952, Brock head coach Marty Williamson should have been feeling pretty confident.

“We had a 4-1 lead against Guelph and they came back on us,” Williamson said. “Teams start coming at you in waves and when you sit back on your heels a little bit in that prevent, it also prevents you from winning.”

It surely did as the Brock men’s hockey team fell 4-3 in overtime to the visiting York Lions, who evened the best-of-three Ontario University Athletics West Division final series at 1-1.

“Give them credit,” Williamson said. “They came at us and I think the shots were 11-2 for them in the third (10-5 according to the stats sheet) and we just didn’t generate enough offence consistently.”

It was the same old story of trying not to lose in the third period instead of trying to win. 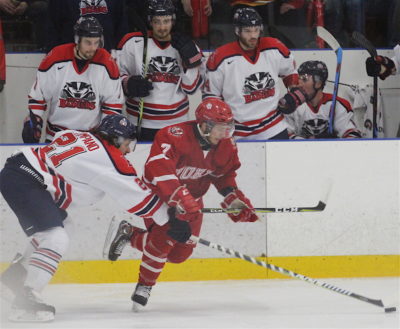 “That’s the lesson from that one,” Williamson said. “You have to play to win every single shift.”

Brock goalie Clint Windsor did his best to help keep Brock undefeated in the playoffs, stopping York’s Justin Bean on a breakaway with 15 minutes left in the third period and then making a couple of excellent saves on Daniel Nikandrov with Brock on power play in the final five minutes of regulation time.

Williamson would have loved to have Brock win its first OUA West crown since 2008 Friday night. The Seymour-Hannah complex was rocking with a large and noisy crowd.

“It was fantastic,” he said. “We had the one game at the Meridian Centre and we’ve had a couple good ones here, but tonight was one of the better ones.”

Brock will have little time to think about what might have been on home ice with the deciding game of the series coming up Saturday at York.

“The good thing is that you don’t have too much time to think about it,” he said. “We are right back at it tomorrow so we have to get our rest and give it our best effort again tomorrow.”

Brock shouldn’t lack confidence on the road. After compiling a 4-10 road record during the regular season, Brock is a perfect 3-0 on enemy ice in the playoffs.

“We have been keeping it simple and we have had some timely goal scoring,” Williamson said. “That kind of stuff has been good for us and we’ve obviously had good goaltending.

“He has been the backbone of this team so we have to go in with a good attitude.”

No one should expect Brock to change what it does.

“We are not a fancy hockey team,” Williamson said. “We play period by period and get the job done.

BPSN Star of the Game: York’s Adam Marsh with the game-winning goal.

Up next: The deciding game of the series goes Saturday at 7 p.m. at Canlan Ice Sports.