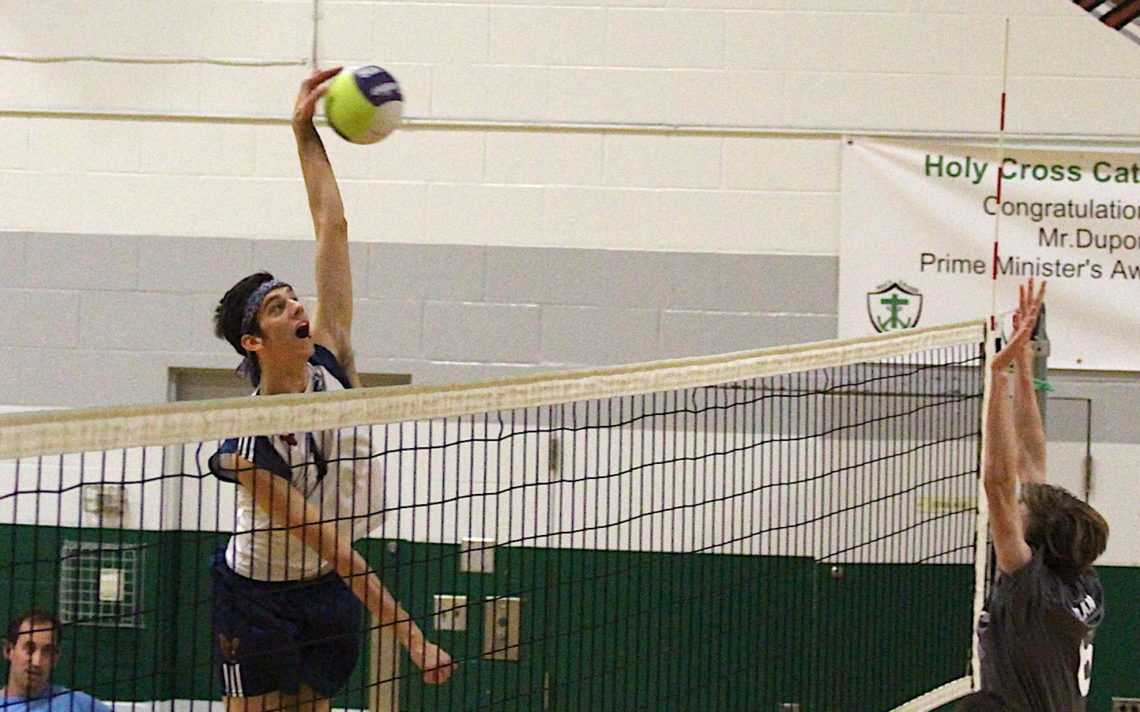 With a 3-0 victory (25-6, 25-13 and 25-19) over the Holy Cross Raiders Monday, Eden won its 14th straight Zone 4 AA volleyball title and heads to Cayuga Thursday to compete at the Southern Ontario Secondary Schools Association championships. A win there, and the Flyers will venture to the Ontario Federation of School Athletic Associations championships looking to improve on the bronze medal they won last year. Eden had won 12 straight medals at OFSAA, including nine of the golden variety.

Bill Markham took over as head coach of the program from Albino Pereira two years ago and admitted to feeling the heat to keep the winning tradition going.

“There was a lot of pressure, but I was an assistant coach under Albino and that made the transition a little easier,” he said. “Following Albino was not an easy task.”

Markham spent seven or eight years as an assistant under Pereira but he’s not his predecessor’s clone.

“I am probably a little more intense than him, but I did learn to be calm,” he said. “He is much more technically sound and I would consider myself more of a motivator, although, he too is a motivator.”

No matter who the coach is, the approach remains the same.

“It’s creating a culture,” Markham said. “You create a culture and an expectation so when the guys come into the program, they know we are going to work harder than most, we’re going to practise every day and we go to a lot of extra tournaments.

“That builds anticipation and an expectation, and we hold each other accountable.”

The Flyers have won three tournaments this year and, if they can make it through SOSSA, they should contend at OFSAA again this year.

“The team that beat us last year in the semis is back and they will probably be ranked No. 1,” Markham said. “I think if we play with defensive intensity, we have a legitimate shot.”

Key to that legitimate shot is the leadership of second-year senior and team captain Micah Nieuwets.

“He is a great jumper but I love his attitude and intensity,” Markham said. “He’s very competitive, but he also knows how to have fun and get the guys playing at their best.

“He really is a true team captain.”

The 16-year-old was surprised and excited when he was chosen as team captain.

“It’s a honour because they are such a great group of guys and anyone could have been captain,” the Grade 12 student said. “I feel I have brought a lot to the role, by talking to the ref and being a leader on the court.”

Intensity is a key part of his captaincy.

“Our practices have intensified and I’m always talking about the way we can improve,” Nieuwets said.

For whatever reason — maybe because Pereira wasn’t coach — Nieuwets didn’t feel the pressure to win last year. That pressure to succeed is back in 2017.

“I felt the pressure that we had to win this game,” he said. “We stayed focused in warmup and just played our game.”

Not sure if he’s back for another year of high school, Nieuwets want to make sure he wins OFSAA gold this fall.

“Everyone on the team brings a lot and I am really looking forward to next week,” he said.

Holy Cross coach Mark Ferretti was OK with his team being the proverbial David in David and Goliath minus the well-placed stone en route to victory.

“They are the tops,” he said. “They work really hard at what they do and for us this year to be fifth or sixth best in the region, that’s nothing to be ashamed of.

“We are really proud because there’s a lot of teams, no matter what league they are in, do worse against Eden.”

“It was a good fun game, a good group of kids on both sides and a couple of laughs,” Ferretti said. “It’s nice that in the heat of competition, you can still have some fun.”