It was an agonizing process, but the Niagara River Lions have selected the 12 players that will open the National Basketball League of Canada season Saturday night at home.

“Oh man, it was incredibly difficult,” River Lions head coach/GM Joe Raso said. “It’s probably the first time that I had to let someone go that I really, really wanted on my team.”

The long-time bench boss of the McMaster Marauders men’s program has had to make plenty of personnel decisions in the past, but the university setting allowed him some wiggle room.

“In college, if I liked someone, it was easy. I would just keep him,” he said. “This was the business part of it and I didn’t handle it very well because I was probably more upset than some of the players who are no longer here.”

Raso feels the players who were cut are good enough to play in the NBL and will be part of the team’s pool of players should injuries hit.

“We’re going to try and help them get jobs somewhere else but if we have to go get somebody, that would be the first group we are going after.”

Raso knew it was time to get on with the process of team building in anticipation of the season opener.

“There’s a time in camp where frustrations built and they build because you’ve been competing against each other for so long that you need to compete against someone else,” he said Monday. “Today we hit that point and that’s a good sign.”

Raso thought there were a number of players who exceeded expectations at training camp.

“I knew Marvel was good, but Marvel is very good,” Raso said of Waithe, a 30-year Canadian, who played two seasons at Arkansas.

Payen Bouchard, a five-time Canadian champion at Carleton, was all that Raso expected.

“I knew Guillaume was good and now the rest of the guys on the team know Guillaume is good,” he said. 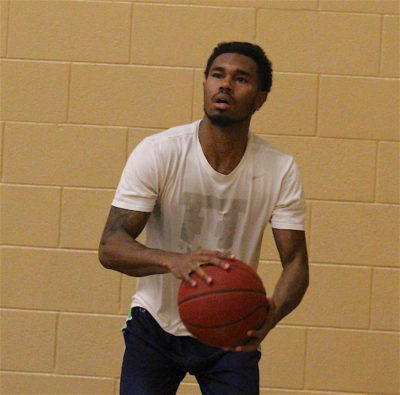 Tate, who played four years at the University of Illinois, has been excellent in training camp.

He has also been impressed with the play of Dwayne Smith and Strong and the veteran presence of Hall, Muldrow and Murray.

He believes his team has the ability to space the floor.

“Five guys who are comfortable knocking down shots in their range,” Raso said.

With the team selected, it’s time to get down to business and Niagara will start with a scrimmage Tuesday night against 3D, a senior men’s team from Toronto.

“I need it to evaluate our team, not the talent pool, but what we are doing,” he said.

The River Lions will open their season Saturday at 7 p.m at the Meridian Centre versus the London Lightning.

“They are an experienced team with a couple of games under their belts,” Raso said. “That’s a huge hurdle but we have to keep our eye on the prize and keep that focus going.

“We are going to have a million things that happen to distract — big things in games and little things off the court and personal things— but we have to stay focused. That is my job.”

Raso has a good idea who his starting five will be, but that will change from game to game depending on matchups.

“I think there’s a few guys who will lead us in scoring and I am very comfortable mixing it up,” he said. “The first couple of shifts, I might platoon.”