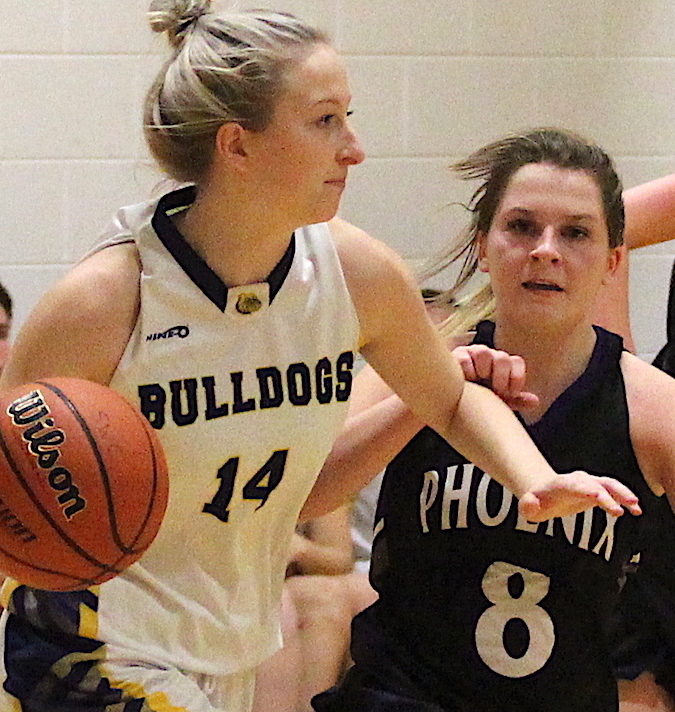 By Bill Potrecz
Sir Winston captain Nat Weber is one of the few veterans on a young squad. PHOTO BY: BERNIE PUCHALSKI

The captain’s C beside Nat Weber’s name on the roster of the Sir Winston Churchill Bulldogs is no accident.

The 17-year-old, Grade 12 student is one of the few experienced players on a talented, but young and inexperienced Sir Winston squad.

Weber’s leadership and experience were on display as the Bulldogs defeated the visiting St. Francis Phoenix 52-32 in the senior girls AA basketball final Monday at Sir Winston.

The Bulldogs advanced to the Southern Ontario Secondary Schools Association (SOSSA) AA playdowns Thursday at Eden and will take on the Zone 3 winner at 9 a.m. in one semifinal. Dundas Valley and McKinnon Park square off at 10:30 a.m. in the other semifinal followed by the final at 3:30 p.m.

“We’re a very young team so my role as a captain is to be very positive and always encourage them,” Weber said. “This is a new experience for them. We just need to work hard and it would be great if we could make it to OFSAA (Ontario Federation of School Athletic Associations), especially in my last year.”

Weber said keeping her younger teammates in a good frame of mind is crucial.

“If something messes up, just encourage them to keep going,” she said. “It’s a basketball game. If you mess up, it’s not the end of the world. You have to get back and play defence, get the ball back, and then go and score.”

Weber has been to OFSAA twice before, in Grades 9 and 10.

“It was a big accomplishment just to go,” she said. “To go to again in Grade 12 would be awesome.”

“I don’t know if it was foreshadowing or pure luck. I knew she played and she got to go to her first OFSSA in Grade 9,” Keltos recalled. “I told her I wanted her to come and that the experience would help her if we ever got back.”

Keltos prepped Weber this summer for her role.

“We talked and we were excited about the young talent and her being a leader,” Keltos said.

Keltos loves that Weber is well aware of her attributes on the court.

“She does a lot of the intangible stuff that you just don’t get in a Grade 9 or Grade 10 kid.”

The Bulldogs led from start to finish, but not without some push back from a feisty Phoenix squad.

“I couldn’t be prouder of how hard to girls worked every day in practice and every game,” St. Francis coach Jono Marcheterre said. “We know we have to outwork our opponents and that became our identity and we embraced it, but eventually you have to put the ball in the net. It comes down to that for us once in a while.”

Up next: The Bulldogs advance to SOSSA AA at Eden Thursday and will play the zone 3 winner.