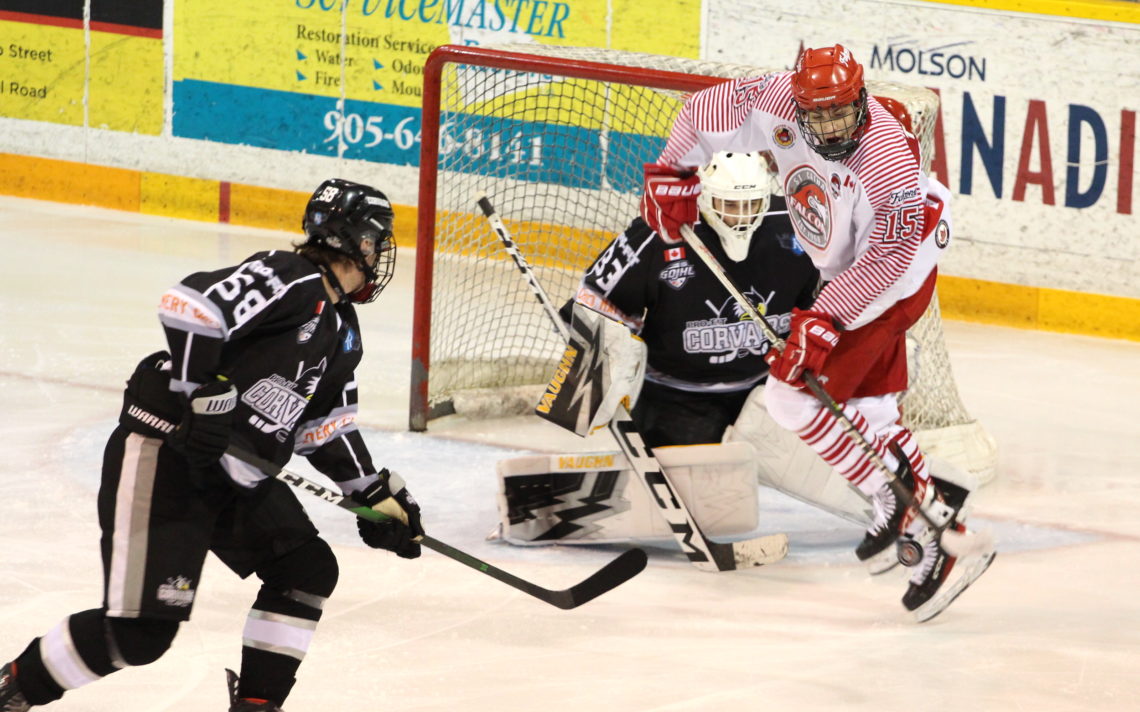 Nicholas Rubino was one of the few St. Catharines Falcons in full flight Monday night.

On a night when the Falcons turned in an overall lacklustre performance, the veteran centre scored two goals to lift St. Catharines to a 3-2 victory over the Caledonia Corvairs in Greater Ontario Junior Hockey League, Golden Horseshoe Conference best-of-seven semifinal playoff action at Jack Gatecliff Arena.

The victory gives the Falcons a commanding 3-0 lead in the series. St. Catharines can advance to the Golden Horseshoe finals with a win in Game 4 Wednesday in Caledonia.

“It felt good to get those two tonight,” Rubino said. “It’s been nice to see everyone else score, too.

Rubino had only one goal in the series heading into Monday’s game.

“We’ve been waiting for him to pop off, that’s why we brought a player like Rubino in with his stature and his ability,” Falcons assistant coach Matt Miller said. “Game 1 and Game 2 we had other guys contributing. We knew it was just a matter of time before he came in.

“He bailed us out and had a great game.”

Rubino, who was acquired from the Thorold Blackhawks at the trade deadline in January, is enjoying his time in red and white.

“It’s the best time of my life, especially for my last year of junior hockey,” the 21-year-old Welland native said. “I couldn’t ask for a better group of guys and a team to be on.”

Miller was subbing behind the bench with head coach Tyler Bielby serving the first game of a three-game suspension and fellow assistant Greg Jambrosich away at a work commitment. Director of Hockey Operations Zach Schipper acted as Miller’s assistant.

Bielby was assessed an automatic three-game suspension after Falcons defenceman Mitchell Dmytrow was given a fighting major, aggressor and instigator penalty at the 20-minute mark of Game 2.

Miller felt the absence of Bielby left a huge void.

“At the end of the day as much as you tell them it doesn’t make a difference who’s on the bench, the head coach’s presence was missed. We got a little but away from our identity, from our structure,” Miller said. “Good teams find a way to win and the boys stuck with it and came out with the two points.”

The Falcons began the game with only five defenceman with Dmytrow suspended and Cal Reesor and Mason Howard on the sidelines. Forward Owen Simpson, who previously played on the blueline in minor hockey, took a few shifts on defence.

It didn’t help when defenceman Josh Reilly got frustrated late in the first period and was ejected for attempting to start a fight.

“Going with four D is never easy, let alone a playoff game,” Miller said. “Very proud of those guys. With (goalie Andrew) MacLean, they are the pulse of our team.

“Defence wins championships and we strongly believe we have to D core to go the distance and they proved that tonight.”

Miller feels the Falcons will be a different team Wednesday.

Rubino left no doubt the Falcons are looking to finish off the Corvairs Wednesday.

“We have to,” he said. “If we let them get one (win) then it’s anyone’s series at that point. We just have to close it out Wednesday.”

Up next: Game 4 Wednesday in Caledonia. Game 5, if necessary, is Thursday in St. Catharines.

The Hamilton Kilty B’s scored a pair of goals 38 seconds apart early in the third period to break a 1-1 tie en route to a 4-1 win over the Fort Erie Meteors on home ice Monday.

The Kilty B’s lead the series 3-2 and can advance to the finals with a win in Fort Erie Wednesday. Game 7, if necessary, would be in Hamilton Friday.

“We weren’t great tonight but the guys know that,” Fort Erie head coach/general manager Nik Passero said. “It was our first bad game in two months.

“I have absolutely no concern we will be ready to go Wednesday in front of our crowd.”

Passero said the Mets appreciated their fans making the trek to Hamilton.

“We want to thank all the Fort Erie fans that drove up tonight. Made it feel like a home game for us.”

Nathan Phillips had two goals for the Kilty B’s while Justin Monteith added one.