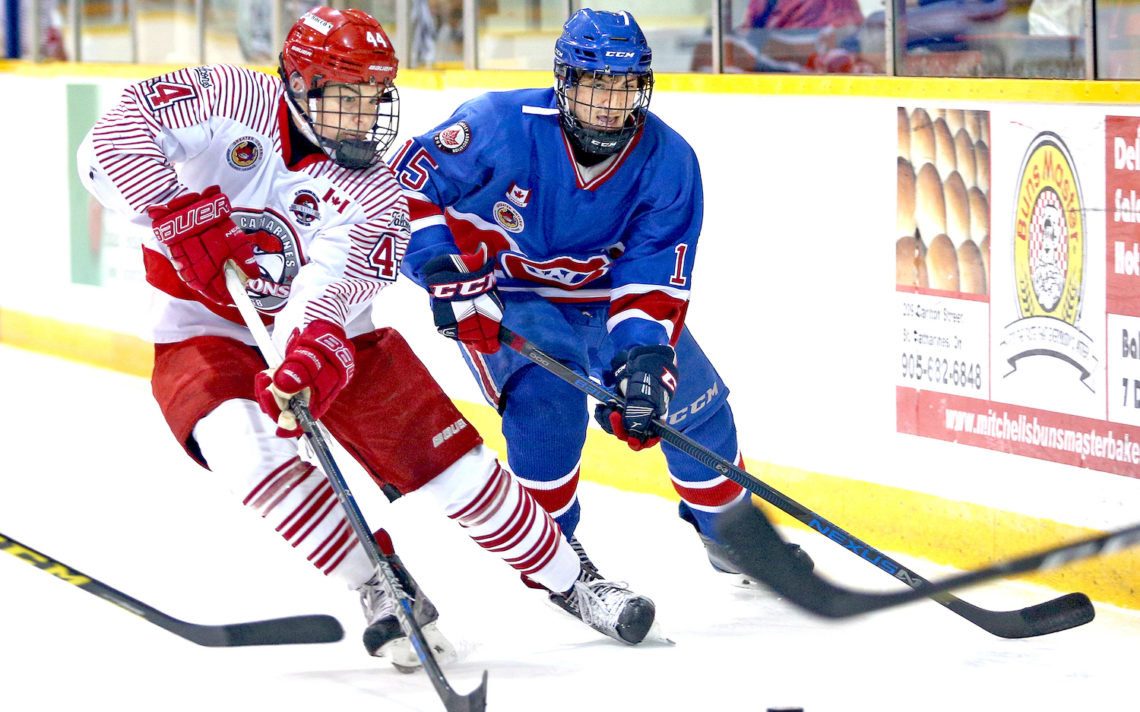 Convinced his team needed a wake up call following a disappointing and undisciplined effort in a loss to Pelham Sunday, St. Catharines Falcons coach Dan Fitzgerald made a bold decision this week.

The rookie bench boss removed the captain’s C from Mike Davies as well as the assistant A’s from Tanner Ferreira, Dante Copps and Lukas Smilsky.

To further make his point, Fitzgerald sat the line of Davies, Ferreira and rookie Jaleel Adams for the first period of their game against the Welland Junior Canadians Friday.

The Junior Canadians have dropped four straight to fall to 5-12-1-1.

“That’s an internal thing. There’s a motivation and a goal why we did that,” Fitzgerald said when asked about the move. “We’re going to keep that in the room.

“The guys really responded well to it and I think you saw a really good team effort today.”

Fitzgerald said the decision was not made without some serious soul searching.

“We really like the group we have here and we’re going to push forward, top to bottom,” he said. “They’e fully aware and it wasn’t done hastily. We made the decision and we’re moving foreword with it.

The Falcons didn’t waste any time making a statement, scoring twice in the first minute of play and five times in total in the first period.

“I don’t think we need five goals to provide validity to it,” Fitzgerald said.

The Falcons managed to maintain their intensity and add to their total, leading 7-2 after two, and then put the game away with a solid final 20 minutes.

“I was really happy with the way we locked down defensively,” Fitzgerald said. “That was a focus for us — that’s always going to be a focus for us. We still took some penalties we can shave off but it’s going to be a process for us. This is something we can build on and not get too high and keep moving forward.”

“Dakota is a heck of a player and he can certainly shoot a hockey puck,” Fitzgerald said. “We’re really happy with the way those guys played in their attention to detail and they were rewarded for it. It’s not all about the dangles. It’s about doing things right in your own zone so can get out quickly and still have energy to make plays.”

Cameron Clark and Nash Braun replied for the Regals.

Falcon facts: Copps (suspension) did not dress for the Falcons . . . Josh Chiarot was scratched for the Junior Canadians . . . Falcons assistant coach Scott Sweitzer was serving a suspension after being ejected in Pelham Sunday  . . . The Falcons lost defenceman Matt Busby for check from behind late in the second period . . . Tanner Main and Welland captain Matt Hobbs dropped the gloves for a spirited tilt in the third.

BSPN Star of the Game: St. Catharines forward Dakota Miskolczi with three goals and an assist.

Up next: The Falcons are off until hosting Caledonia next Friday.