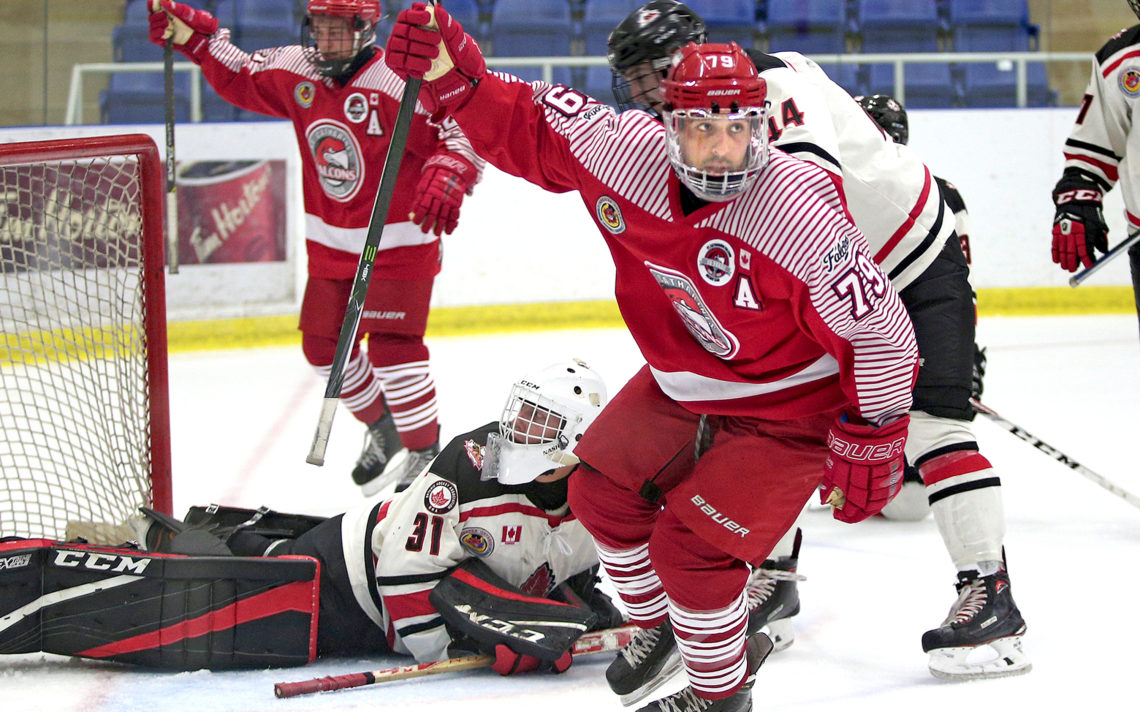 By Bill Potrecz
Tanner Ferreira collected two points Sunday as the St. Catharines Falcons doubled the Niagara Falls Canucks. PHOTO SPECIAL TO BP SPORTS NIAGARA
NIAGARA FALLS
The St. Catharines Falcons are expecting big things from Tanner Ferreira this season.
The 20-year-old London native is one of only a handful of returning players from last season and once again is being counted upon to do what he does best and fill the net.
Ferreira scored once and set up another as the Falcons rallied to defeat the Niagara Falls Canucks 4-2 in a Greater Ontario Junior Hockey League, Golden Horseshoe Conference game Sunday at the Gale Centre.
It was the second win for St. Catharines, 3-1, over Niagara Falls in 48 hours. The Falcons also topped the Canucks 6-0 Friday.
“We have five guys who are back from last year and we try and bring it every single night,” Ferreira said. “If I get on the scoresheet, it’s a bonus. “We have a lot of guys who can contribute and I just try and do what I can to help the team win.”
Falcons coach Dan Fitzgerald made no bones about how important Ferreira is to the team.
“He’s huge for us. He brings a dynamic offensive ability and a leadership role to the team as well,” Fitzgerald said. “Being a guy who has been here before, he understands the expectations of the team.
“He’s a real integral part of what we’re doing here and to get him going is huge.”
Ferreira, who began his junior career with him hometown London Nationals for two seasons before joining the Falcons this year, has increased his goal production each season from 10 to 19 to 31 last year.
In addition to a solid game by Ferreira, captain Michael Davies chipped in with four assists and now has five goals and 11 points in four games.
Once again, Owen Savory saved the day for the Falcons with another magnificent performance between the pipes, kicking out 35 of 37 shots.
“He’s our MVP every single night,” Ferreira said of Savory. “We need him and he’s a big part of our team.”
Niagara Falls outshot St. Catharines 13-7 in the opening period and scored the lone goal with just under a minute remaining when Matthew Caruso jammed home a rebound with the man advantage.
“We came out pretty flat in the first,” Ferreira said. “You never want it to be close, but our team saying this year is resiliency, and we were able to do that in the third and tie it.”
The Falcons withstood some early penalty trouble in the second and finally started to generate some offence when Ryan Mooney broke in all alone and beat Savory with about eight minutes to play.
The Falcons finally solved Zach Moore four minutes later when Ferreira netted a power-play goal to narrow the deficit to 2-1.
That goal changed the momentum for the rest of the period. The Falcons finally tied it eight minutes into the third with another power-play goal, this time by Haydon Broomhead.
Lucas Smilsky then went to work and scored two goals seven minutes apart to complete the comeback.
“We want to limit the number of chances we give up so Savory doesn’t have to work so hard,” Fitzgerald said. “If we make his life a little easier. . . . We know he’s the backbone of this hockey club and when we go to the net, good things happen for us.”
Niagara Falls coach Frank Pietrangelo could only wonder what the difference would have been had his club been able to solve Savory with a little more consistency.
“We had chances to score and we didn’t bury them,” Pietrangelo said. “He was the first star both nights and faced 80-something shots.
“We had the puck a lot and did a lot of good things, but you still have to score goals to win games.”
The Canucks are now 2-2.
In one other game Sunday, the Welland Junior Canadians defeated the Pelham Panthers 7-1.
Alex Darneski had two for the winners while Tanner McEachern, Anthony Grigg, Matthew Giannini, Noah Blakely and Brendan Rylott added singles.
Bailey Stumpo replied for the Panthers.
Falcon facts: Carson Eden was scratched for the Falcons  . . . Eric Becker did not dress for the Canucks  . . . Dylan Pietrangelo, son of Niagara Falls coach Frank Pietrangelo, is working as the Canucks goalie coach  . . . Niagara Falls MPP Wayne Gates dropped the puck for the ceremonial faceoff with some help from Canucks mascot Justin Beaver  . . . Buffalo Sabres national anthem singer Doug Allen performed the Canadian anthem (on tape)  . . . The Falcons are wearing patches on their jerseys commemorating their 50th season.
SATURDAY
Corvairs 7 Panthers 3
Sean O’Brien scored three times as Caledonia defeated visiting Pelham at the Haldimand Centre.
T.J. Hughes, Eddie Schulz, Mark Bzowey and Matt Weston added singles.
Jake Herrberg had two goals and Francesco Gigliotti one for the Panthers.
Meteors 4 Regals 3
Drew Passero scored twice to lead Fort Erie past Buffalo at the Leisureplex.
Mike Massotti and Doyle Groulx also scored for the winners.
Michael Sokol, Shawn Kross and Jacob Santarelli replied for the Regals.
STATS PACK
BPSN player of the game: St. Catharines netminder Owen Savory with 35 saves.
For the St. Catharines Falcons: Lucas Smilsky 2 (2,3); Tanner Ferriera (2); Haydon Broomhead (2).
For the Niagara Falls Canucks: Matthew Caruso (3); Ryan Mooney (2).
Game stats: Shots on goal: By St. Catharines on Zach Moore 32, by Niagara Falls on Owen Savory 37; Power plays: St. Catharines 2-for-6, Niagara Falls 1-for-9; Penalty minutes: St. Catharines 28, Niagara Falls 32.
Attendance: 275.
Up next: The Falcons play host to Welland Friday at 7 p.m. The Canucks are in Thorold Thursday at 7:07 p.m.