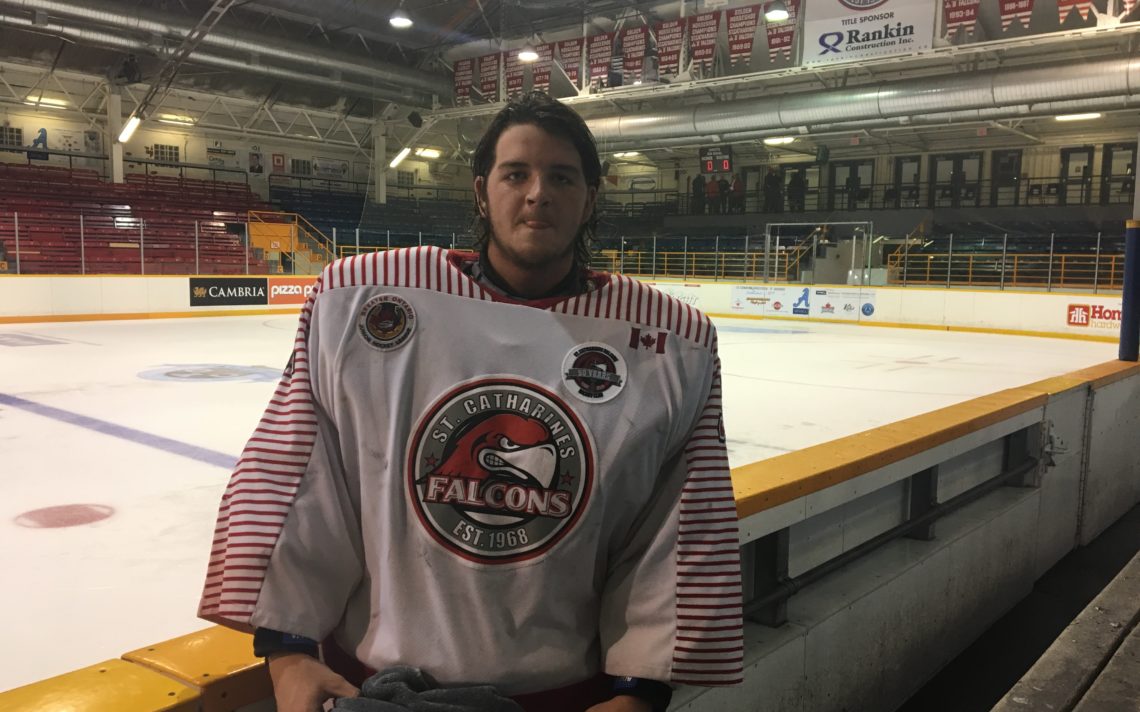 By Bill Potrecz
St. Catharines Falcons goaltender Owen Savory. PHOTO BY: BPSN STAFF
Owen Savory is back for some unfinished business.
The 20-year-old netminder had a sensational year for the St. Catharines Falcons last season, posting some gaudy numbers (1.99 goals-against average, and .927 save percentage) while displaying a calm, cool demeanour between the pipes.
Savory, a native of Cambridge, was in mid-season form Friday as the Falcons blanked the Niagara Falls Canucks 6-0 in a Greater Ontario Junior Hockey League game at Jack Gatecliff Arena.
The game was the home opener for the Falcons, who went 1-1 at the Showcase Tournament last weekend in Brantford to open the regular season.
“It was unbelievable. The boys really brought it tonight,” Savory said. “I’m glad we opened up against Niagara Falls. We have a history with them, so it was awesome to open up against them and play so well.
“It feels good.”
He admits it’s no longer about the stats in his final season of junior.
“It’s all about winning a championship,” he said.
“We had a good team last year and things didn’t quite work out, but we have a solid team here this year.”
With only five regulars returning from last season’s club and 10 players ages 17 or younger, Savory will be a key as the team searches for its identity early on.
New Falcons coach Dan Fitzgerald coached him previously in Cambridge and is well aware there may be no more important player on the team than his veteran goaltender.
“We weren’t our best in the first period and he really held us in there,” Fitzgerald said. “I know what kind of kid he is and what kind of competitor he is, and I couldn’t be happier that he’s the guy in between the pipes for us.”
The Falcons netted the lone goal of the opening period when captain Michael Davies snapped a low shot past Zach Moore with seven minutes remaining in the period. The Canucks held a 12-9 edge in shots in a mostly nondescript 20 minutes.
St. Catharines opened up a 3-0 lead in the second with a power-play goal by the dangerous Lucas Smilsky before newcomer Matt Baumann netted his first junior goal seven minutes later.
Mitch Pellarin and Davies, with his second, wrapped up the scoring in the middle frame a few minutes later as the Falcons took a 5-0 lead into the final frame.
Evan Miller concluded the scoring with a goal in the third period.
Fitzgerald was obviously pleased by the outcome.
“It’s been a lot of hard work the last two weeks to get to this point,” he said. “This is just the starting point for us. The guys saw that a lot of things we have been working on worked in the game.
“It was really a good team game. The young guys worked hard and I was really proud of our older guys who stepped it up.”
Three games into a six-month regular season, Fitzgerald knows how important it is to focus on the finish, not the start.
“If you’re not getting better, you’re just getting worse,” he said. “We need to be improving every single day. This is just step one.
“The boys worked hard and were rewarded, but we still need to tighten up a lot of things and build on what we started on.”
Niagara Falls coach Frank Pietrangelo predictably had few good things to say about his club’s effort.
“We had chances to score goals and maybe if we would have the game would have had a different score, but they were better than us,” he said. “For us to lose 6-0, we’re embarrassed. Obviously, we didn’t play our game. It’s early in the year and it’s a learning lesson for a lot of the guys who just have come in here.
“We have to be better.”
FALCON FACTS: St. Catharines Mayor Walter Sendzik dropped the puck for the ceremonial faceoff . . . Scott Sweitzer and Andrew Kilcar are back behind the bench for the Falcons as assistant coaches  . . . Davies is a first cousin of former Falcon Johnson Andrews. Davies is wearing Johnson’s old number 72  . . . Public address announcer Jack Darling wasn’t in his usual perch in the press box, instead opting for a seat directly behind the penalty box  . . . The Canucks gave Moore the third period off after he permitted five goals on 23 shots.
STATS PACK
BPSN player of the game: St. Catharines netminder Owen Savory with 34 saves for the shutout.
For the St. Catharines Falcons: Michael Davies 2 (4,5); Lucas Smilsky (1); Matt Baumann (1); Mitch Pellarin (1); Evan Miller (1).
For the Niagara Falls Canucks: No scoring.
Game stats: Shots on goal: By St. Catharines on Zach Moore/Noah Fortuna (31), by Niagara Falls on Savory (34); Power plays: St. Catharines 1-for-4, Niagara Falls 0-for-11; Penalty minutes: St. Catharines 34, Niagara Falls 10.
Attendance: 281.
Up next: The Falcons and Canucks meet again Sunday at the Gale Centre in Niagara Falls at 6 p.m. 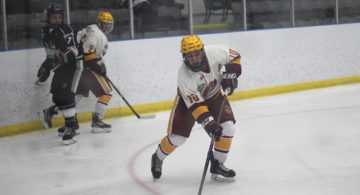