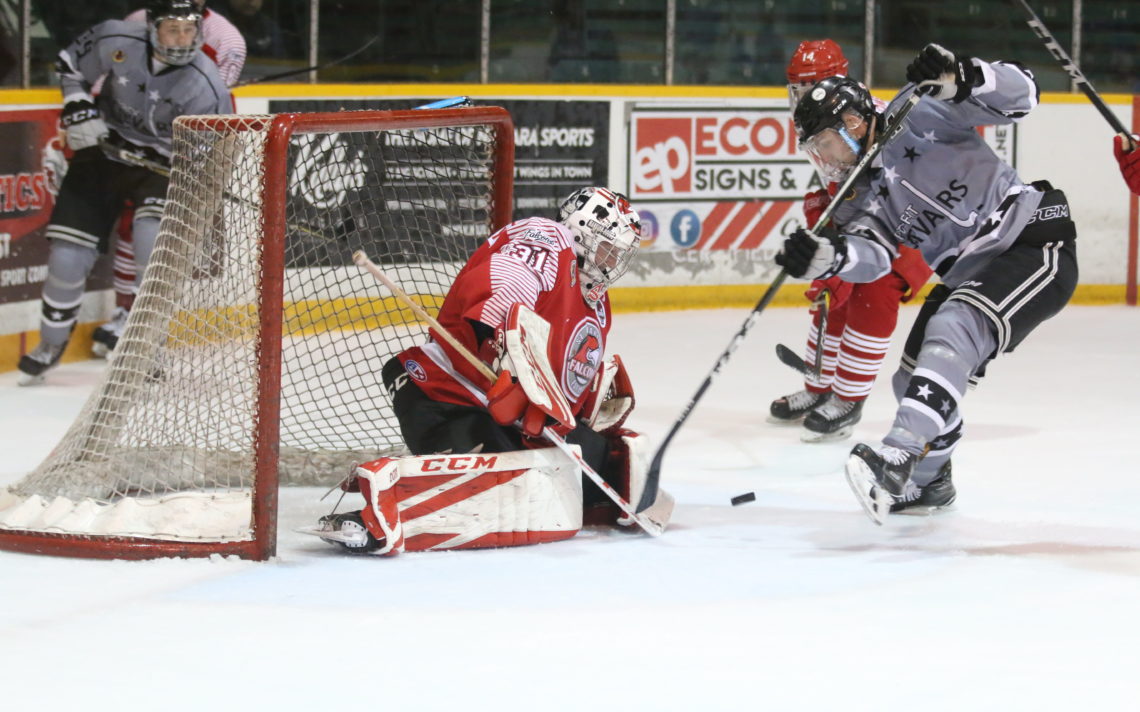 The St. Catharines Falcons have made a significant turnover in their roster in the last few weeks but Lucas Smilsky’s job remains the same.

The 20-year-old forward earns his keep for the Falcons on offence, be it as a sniper or playmaker.

Smilsky did both Tuesday, potting a goal an an assist as the Falcons defeated the Caledonia Corvairs 5-2 in a Greater Ontario Junior Hockey League, Golden Horseshoe Conference game Tuesday at Jack Gatecliff Arena.

The win improves St. Catharines’ record to 28-7-1-2 and moves them to within a point of the Ancaster Avalanche for second place.

The loss snaps Caledonia’s 18-game winning streak. All four of their regulation losses have been at the hands of the Falcons.

Smilsky was all smiles when he emerged from the Falcons dressing room following the crucial victory.

“It’s incredible. I came here to play games like that,” he said. “All the games like that you come ready to play and to bring the win back to us and for all the guys to buy into the system, it’s a ton of fun.”

As much as he enjoyed beating the Corvairs, Smilsky wasn’t about to get overconfident.

“It definitely gives us confidence but once the regular season is done, the playoffs are a whole new season,” he said. “It’s 0-0 once the playoffs start.”

Smilsky now has 22 goals and 61 points in 38 games, but also realizes how important it is to play at both ends of the rink.

“I try and play my whole game. As much as I play offence, I try and play as much defence as I possibly can,” he said. “I know I’m here to put up as many points as I can but I’m also here to be a room guy and be a leader.”

The Falcons grabbed a 1-0 lead after the first period when Smilsky converted a perfect pass from Michael Davies for his 23rd of the season. Smilsky also rang a shot off the crossbar in the period.

St. Catharines padded their lead to 3-0 after 40 minutes on a pair of power-play markers by Liam Dunda and Matt Busby.

Things got hairy in the third as the Corvairs put on a full-court press and finally solved Owen Savory when former Niagara IceDog and Thorold Blackhawk Cal Davis netted his 12th of the season.

The Corvairs continued to dominate but Andrew Somerville netted a power-play goal to make it 4-1 before Owen Lane added a late goal for the Corvairs. Dakota Miskolczi then scored into an empty net to put the game away.

It was a wild and intense finish but Falcons coach Dan Fitzgerald didn’t seem to mind it one bit.

“It’s huge. We understand that’s going to come,” he said. “The game is never over until it’s over, especially against a team like that.

Former Erie Otter Carson Edwardson made his St. Catharines debut and picked up a pair of penalties. He also rang a snapshot off the post.

St. Catharines forward Mike Davies picked up three assists and was also shaken up twice in the third

Falcon facts: Tanner Brown, Tanner Main and Jack Venneri did not dress for the Falcons  . . . The game started 25 minutes late when officials did not arrive on time  The third period was delayed about 15 minutes when the driver of the ice resurfacer inexplicably went over the ice twice after dumping three loads of snow from the Zamboni on the ice due to an equipment malfunction. It was as bizarre as it sounds . . . Caledonia defenceman Jack Wieringa is a former member of the Niagara IceDogs  . . . Former IceDogs and current Brock coach Marty Williamson was in attendance.

Eric Dhillon made 46 saves for the shutout as the Thorold Blackhawks blanked the Buffalo Regals.

BPSN Player of the Game: Falcons forward Lucas Smilsky with a pair of points.

Up next: Home to Buffalo Friday.