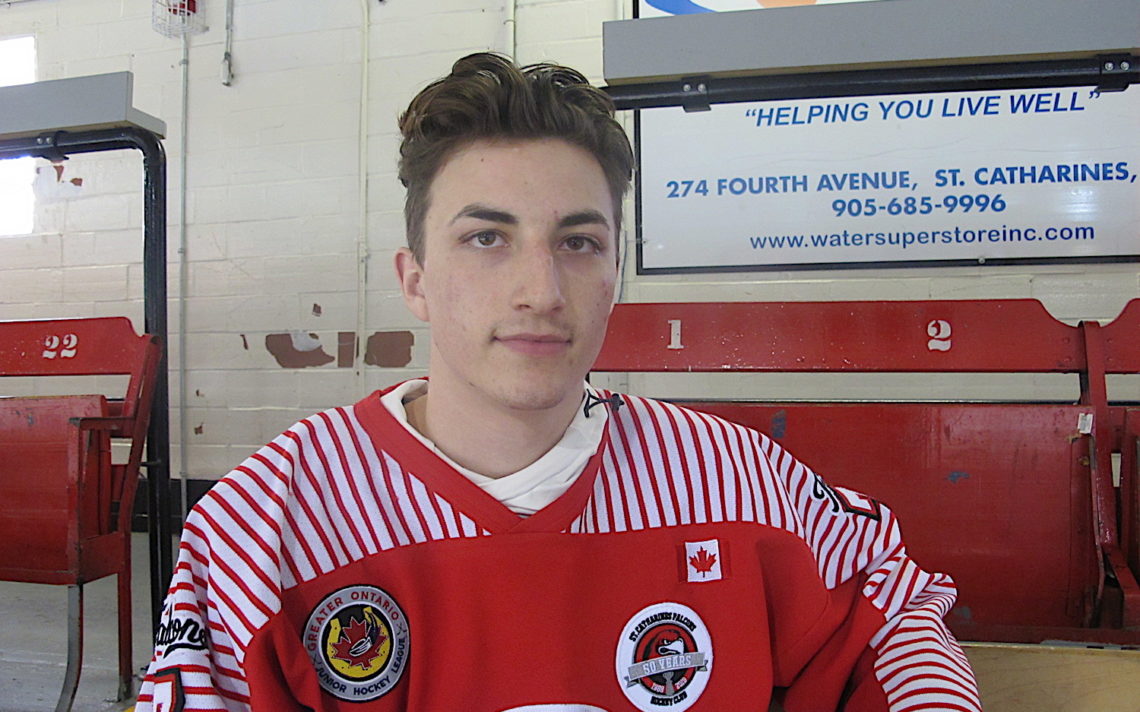 Edwardson looking to reboot his career

The St. Catharines Falcons and Carson Edwardson seem to be a perfect fit for each other.

The Falcons have made a series of big moves recently bringing in some high-end talent with an eye towards contending for a Sutherland Cup in their 50th anniversary season.

Edwardson, meanwhile, was looking for a place to play and keep his skills sharp after a falling out with the Erie Otters of the Ontario Hockey League.

Edwardson made his Falcons debut Tuesday as St. Catharines topped the Caledonia Corvairs. It was his first game in over a month but Edwardson showed a strong shot — he ripped a blast off the post — and a willingness to mix it up.

“Just to get into some games and get back into some things,” Edwardson said, when asked about joining the Falcons. “I haven’t played in five weeks since I left so I couldn’t take seven months off and then hop into next season.

“I had to play and I wanted to live at home so this was the best choice for me.”

As a native of Niagara Falls — he played three games for the Canucks a couple of years ago before joining the Otters — Edwardson admits playing for the Falcons didn’t go over particularly well with some of his hometown buddies.

“A couple of my buddies busted my chops about coming here but I had to do what was best for me and where I would play the longest and play with higher-end players,” he said. “It’s the closest I could be to still playing in the O so this was my best option.”

Falcons coach Dan Fitzgerald feels Edwardson can provide depth up and down the lineup.

“He can go up and down our lineup. He can be on the first line and chipping in goals so he can be on the third line shutting down the other team’s best players. There are a lot of options with a player like that and we’re thrilled to have him.”

Edwardson was drafted in the 11th round by the Otters in the 2015 OHL Priority Selection after a couple of seasons at Ridley College. He was part of the Otters’ OHL championship team last season and had five goals and eight points in 24 games this season.

“I wasn’t happy. I tried to stick it out a bit but once we had enough, we had enough and decided to come home,” said Edwardson, whose father Don was a former junior B star with both the Falcons and Canucks. “They said they would try and make a deal and then they said there were problems with teams not wanting to pay my education package.”

Edwardson indicated all that has been worked out and he is looking forward to getting back to the OHL next season.

“I’m free to go anywhere next season. I just want to play hockey and finish off the season here,” he said.

He realizes how well he fares this year could go a long way to getting him another shot in the O next season.

“It’s very important. I have to work hard and put up numbers so that they will take me and not second-guess anything,” he said. “It’s definitely exciting. I’d love to get a ring here and then go up. I want to play as long as I can and Frank (general manager Frank Girhiny) got me here to try and do that.”

Edwardson has been impressed with the talent level on the Falcons.

“Everyone here pretty much knows their role and who does what. As long as everyone does that, we’re going to be tough to beat,” he said. “I will just do what I normally do. I can probably put up more offence here than I would there but I definitely play a complete game so nothing’s going to change.”

Fitzgerald and Girhiny will spend the next little while trying to fit all the pieces together.

The Falcons, 27-7-1-2, have won seven straight and host Buffalo Friday.