The Niagara IceDogs have become analytical thanks to Brandon Currie.

The 20-year-old Collingwood native joined the IceDogs this summer as a full time director of analytics after spending a year on the business side of the organization.

IceDogs head coach Billy Burke said after he took over the job from Dave Bell in August he wanted to further explore the analytics side of the game.

“We wanted to monitor and track things without going crazy and overboard with it,” Burke said.  “A lot of the stuff is so we can just get an indicator on how we’re playing.

“Brandon is a smart guy and he was around last year and he wants to get into it.”

Currie, who has also helped out the organization as a scout, said after meeting with Burke he was able to come up with a program that took what he was already doing and combine it with what Burke wanted.

“There are a lot of things I brought to the table and things I like to do and a lot of stuff Billy wanted to see,” Currie said. “It was taking what I know and what Billy wanted and trying to combine everything.”

What Currie came up with is an interesting cross section of individual and team statistics broken down by player as well as by period and game.

Things like how well the team recovers pucks dumped into their zone and how efficient they are at clearing the zone. Toss in face-off numbers, hits, giveaways, takeaways, blocks and ice time, and the stats can be of immense help to the coaching staff.

“It’s great to be able to have some hard numbers to back up some things up,” Burke said. “It’s not everything because if a guy plays 25 minutes a game, he’s going to have more giveaways and takeaways than the guy playing two minutes a game.

“It is fairly accurate. We have goals for our team and we feel when we are hitting our goals it usually correlates to playing well. If we’re not hitting our goals, it probably wasn’t a good game or we were on our heels a lot.”

After the game, it takes about an hour before he has a report on the game in the hands of the coaches.

“He gets a lot of help up there. He’s great with the spreadsheets and using his computer to have things clean and right there,” Billy Burke said.

Billy Burke said while the date is very useful, it’s not the be-all and end-all.

“There are always factors that go into the numbers. It’s not like we just sit here and look at the spreadsheets and think that’s all we need to do. I think hockey, more so than other sports, you need to go on what you see and what you feel and how the guys are doing.”

Currie, who also works with Joey Burke on non-game days, began digging into numbers when he was in high school.

“I always been interested in analytics and did it a little bit through high school and the local junior A team,” Currie said. “Last year, I was scouting and started putting some smaller numbers together and gave it to the coaches and they said it was interesting and could I build on it and it kind of grew.”

Currie said he gets a great deal of satisfaction from his position.

“It definitely feels good. It helps the team win and every little thing you can do to help out the coaches. It’s a sense of gratification.”

Currie would love to move up the hockey ladder at some point.

“I think everyone dreams of being in the NHL one day. It’s Step 1 to the end goal but right now I’m just focused on Niagara. I’m really content here.”

The IceDogs are home to Sarnia Friday before heading to Sudbury Saturday and North Bay Sunday. 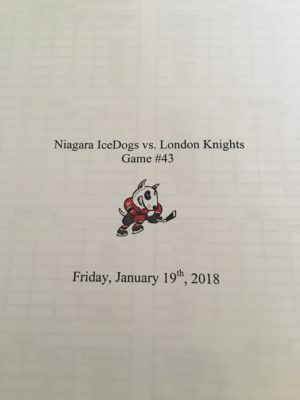