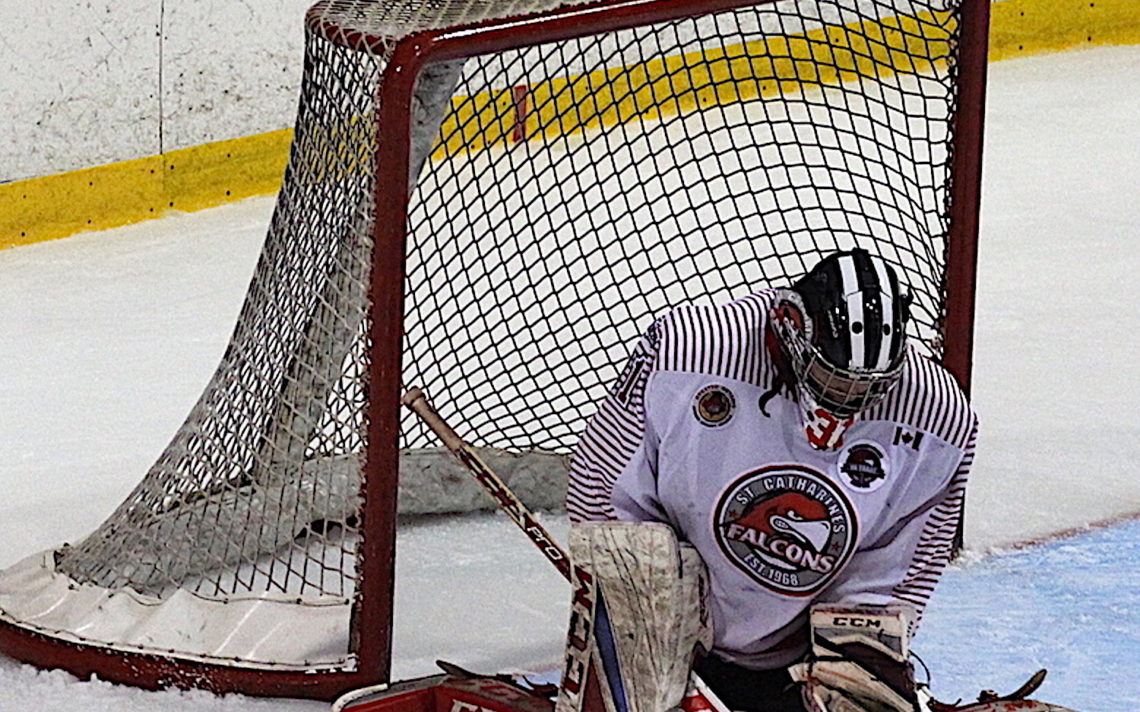 Falcons hang on to take opener

Carson Edwardson is playing his best hockey at the most important time of the year.

The 18-year-old Niagara Falls native, who compiled 13 points in 14 regular season games with the St. Catharines Falcons after being picked up from the Erie Otters, has turned his game up a notch in the playoffs and the results have been impressive.

Game 2 is Saturday in Ancaster with Game 3 back in St. Catharines Tuesday at 7 p.m.

“I had to adjust. I had a couple of weeks off, but the playoffs are a whole different game. It’s more my style,” Edwardson said. “I got lucky I guess and this fits my game a little better.”

Edwardson has given the Falcons some much needed depth and scoring up front.

“He has an NHL-type shot and he’s getting pucks on net. He’s really come a long way,” Falcons general manager/coach Frank Girhiny said. “He’s been real good for us. It’s been a little bit of an adjustment for him coming from the OHL, but he’s fit it really well.”

While Girhiny was pleased with Edwardson’s offensive output, he was furious with his team’s lack of composure in the third.

Leading 4-1 heading into the final period, the Falcons took seven minor penalties in the final 20 minutes and nearly saw their lead evaporate as the Avalanche took advantage and scored a pair of power-play goals.

“Here’s the bottom line. The only way they get back in game is us giving them five-on-threes,” Girhiny said. “The guys on our team have to figure out if they are going to take penalties or not. They say they’re not. I expect a better effort next time because they can’t play with us five-on-five.”

The Avs jumped out to a 1-0 lead less than a minute in when Matthew Bridgwater scored after miscue at the blueline by Arber Xhekaj. Lucas Smilsky tied the game with his third of the post-season when he converted a perfect pass from Tanner Main. Edwardson then gave the Falcons their first lead of the game when he threw his own rebound on net with under a minute to play. The Avs outshot the Falcons 10-5.

Edwardson made it 3-1 early in the second after which Ancaster goaltender Ryan Dugas angrily fired the puck out of the zone towards the officials. Dugas, who appeared be upset that he may have been interfered with on the goal, was given a match penalty for abuse of officials an could be suspended up to four games. Tanner Sheppard finished up in goal and permitted one goal the rest of the way.

Later in the period, Ancaster captain Bryce Robertson was ejected for a check from behind. The Falcons lost Main on the same infraction in the third. Falcons captain Tyler MacArthur was given a 10-minute misconduct later in the period while serving a minor penalty.

Ancaster reduced their deficit to 4-2 when Liam VanLoon scored a power-play goal six minutes into the third and made it 4-3 when Adam Meijer scored with three minutes to play.

“A lot of these guys don’t know how to win. It’s understanding and learning.”

Up next: Game 2 is Saturday in Ancaster with Game 3 back in St. Catharines Tuesday at 7 p.m.