It didn’t take long for Gage Meller to make his mark in the fencing community.

The 14-year-old, Grade 9 student at Holy Cross began competitive fencing only last fall and recently came away with a pair of bronze medals at the 2018 Ontario Winter Games in Orillia. The games were the culmination of a year-long selection process that saw the best under-15 Ontario fencers competing.

“Taking the double bronze is a wonderful achievement to Gage’s season having started fencing less than a year ago at a summer camp at Brock University,” Brock coach Tim Stang said.

It didn’t take Stang long to recognize Meller’s aptitude for the sport.

“You can tell the kids with the ability to walk and chew bubblegum so to speak,” Stang said. “He definitely has that and he has a very caring and knowledgeable way about himself so he’s able pick up things very quickly and be able to use them almost immediately.”

Meller’s love of the sport began as a child who loved to play with swords.

“It was something I always liked to do,” he said. “One day my school (Canadian Martyrs) came here (Brock) for a fencing camp and I decided to do it.”

Meller, who took a beginner’s class and then began fencing competitively in the fall, wasn’t quite sure what to expect when he began competing.

“It kind of came as a surprise. Some of the people I fence against have been doing it for a year or a year-and-a-half and I can pretty much beat them,” he said.

That early success, he feels, was crucial.

“It’s definitely a confidence boost. When you get in there and you realize you are pretty good it helps you to want to keep coming. If I had constantly lost, I don’t think I may have been as dedicated. It’s not a much fun.”

Both Meller and Stang feel the mental aspect of the sport is perhaps the most important.

“You can be a talented athlete, but without the effort and intelligence, you can’t succeed,” Stang said.

“To be a fencer, surprisingly, you have to be able to think,” he said. “When you are on the line, you have to know what you are going to do. You can’t rush into it without a plan.

Meller competes in sabre, the only fencing discipline where competitors are permitted to slash rather than just use the tip of their sword to score points. 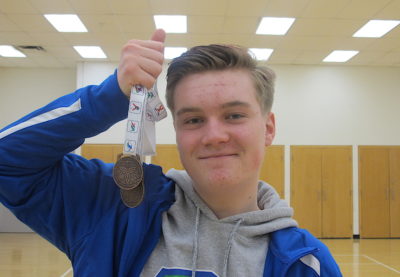 “If someone hits you really hard, the best thing to do is forget about it. If you think about it, you’ll get hit again,” he said. “I know I’m not invincible. I know I’m going to get hit. You have to get over it and hop right back into the next point.

“You have to stay composed and take your time. Take a walk and then hop right back in.”

Meller, who also plays soccer, baseball and hockey, admits he sometimes gets a weird glance or two when asked about the sport by his classmates or teachers.

“They ask me all these questions and I try and explain it, but they don’t really understand it because they have never really experienced someone who fences,” he smiled.

Next up for Meller are the Canadian Fencing Championships which will be held in May. The event will be jointly hosted by Brock University and the Niagara Swords Fencing Club. The event is expected to draw about 1,000 athletes from across Canada and their accompanying family and coaches.

“I am trying to see where it takes me,” Meller said, when asked about his future. “I’m doing well after six months. I don’t know where it can take me so I’m aiming to do as well as I can at the nationals.”

“The future is anywhere he wants to go,” he said. “While we’re an Olympic sport, there are many avenues he can take with this. He can focus on university sport, take in nationally or internationally. He’s really young.

“We’re a late specialization sport. A lot of our Olympians are hitting their peak at 25 and into their 30s. Some compete right into their 40s. A 14 or 15-year-old competing at this level, he can easily keep progressing.”